Today was mostly relaxing. We woke early at our campground, ate breakfast, packed up and stopped at Walmart for a few things before getting on the freeway. Again we were on I-75, but it was just about 3 hours to the Everglades! Avi slept and Zoe talked the entire time about kitties.

The western part of the Everglades is way less visited than the eastern part near Miami, so we are having an adventure here which I got all planned out with the rangers today. Tomorrow we are kayaking a short way out to an island to camp for the night. Should be fun!! Most of this afternoon I got stuff together for kayaking while the kids ran around the campground.

We are staying tonight at the Collier-Seminole State park campground. It’s fairly empty so I grabbed the spot right by the playground. Well it’s less a playground more a swing set and monkey bars. Zoe had fun perfecting her monkey routine and I periodically had to pull Avi off when he got to high. Otherwise I just let them run around free all afternoon…. Never far enough out of sight. They also has fun rolling around the ice cream maker ball. It produced some tasty vanilla ice cream after a while. Once my kayak trip prep was done we took a leisurely walk around the park. We circled the campground and then meandered to the boat launch. It also has access to the mangrove swamp so it was interesting for the kids to see the brown tannin filled water. Avi wanted to get in it. We got our feet wet but didn’t go in. Gators and all!

On our walk back to camp we met another family with two young girls. They were from Quebec and spoke French. They joined us at the playground until dinner. One of the girls was 4 like Zoe; they became fast friends. Later another fam with 2 boys came to play. They were from Germany. I guess I didn’t realize just how much of an attraction the Everglades are internationally. It was fun to watch the kids play. Mine were by far the most filthy.

Zoe wanted to finish the day with a ‘concert’ but had a hard time understanding that the others weren’t being recruited as talent because they couldn’t understand her language. It took some discussion and anger on her part to conclude to just do it herself from the monkey bars instead of the picnic table stage. Well once she got started with her half-circus half-song act the others joined in! It turned out great and the other parents joined me near my assigned seat. They even whooped up their “bravo”s as each kid took a turn. Adorable.

We ended our day with a much needed shower. Neither me nor the kids have had shoes on most of the day and they were playing in the dirt since yesterday. It was a minor fiasco in the shower house…Zoe in her stall and myself in mine with Avi running between. They were a bit out I control, but not bad until I was drying Avi and looked up to see Zoe licking the handrails. Yes. Licking the handicap accessible hand rails in a public bathroom shower house at a campground!!! I swatted her bum after choking back a scream and she stopped instantly (of course). All I could say was “disgusting” in my deepest most disgusted voice. Here is the worst part: this was the second of such offenses today. I know!! While in a gas station bathroom (a one holer) she attempted to open the door handle with her mouth. Ugh. This is the type of stuff Zoe often does – not naughty per say, but WRONG. It makes for odd lectures.

We had a long chat this evening about poop germs and having awareness. 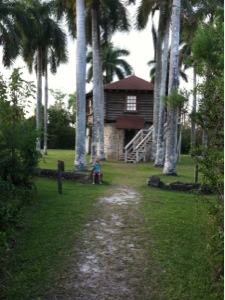 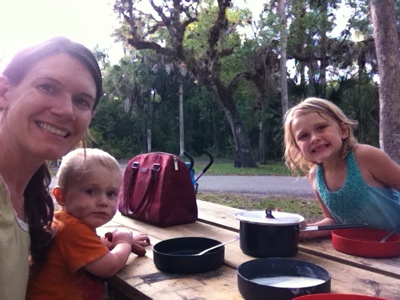 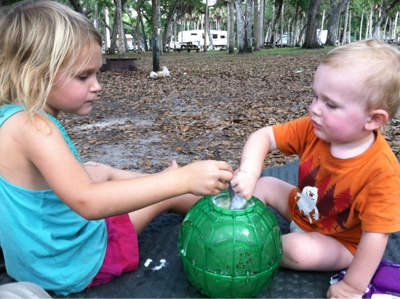