This morning was wonderful. The kids and I have gotten quite used to living in the tent so we are getting good sleep. I woke before the kiddos and got some hot oatmeal going. It was cool and pleasant; quite nice after a hot day yesterday. Once they woke we played some more Easter egg hunt and then took a walk around the campground (camping village in Zoe speak). Zoe gathered flowers and read the campsite
numbers. She is quite impressive with her number skills and knows the system well enough to come up with fivedy five (55) or tendy six (16); both of which really make more sense that the proper terms.

Anyway, we finally got around to driving off to Biscayne national park. I wanted to check it out and get the book stamped though I know 95% of the park is underwater. It’s primarily a coral reef. The kids still enjoyed the touch table in the visitor center. Avi especially loved riding a dead turtle shell. We walked along the boardwalk out a jetty and back. There is a nice view of Miami from there, otherwise it’s not awesome if you can’t snorkel.

Our next stop was also less stellar than expected: Homestead Air reserve base. Dad was stationed here 36 years ago when it was a real base prior to being demolished by hurricanes. It is now tiny. I thought we would get a few things at the commissary….not one nor is there even a shopette. I also thought I’d fuel up the car on base, but alas there is also not a gas station. Sigh… We drive around (literally, it’s just a small loop) the whole base in 5 minutes before getting groceries at the local Publix. After that I headed back toward the Everglades. Avi fell asleep and Zoe drowsed, so I parked in the shade at the visitor center and looked up two other potential attractions: the gator farm & air boat tour OR the monkey jungle which Dad seemed stoked still existed. Well, the latter was too pricey even with a mil discount and the gators just didn’t appeal since I could hike (for free) on a trail and hope to see some.

Wish granted! Once the kids woke we went walking on the Anhinga trail boardwalk. It’s .8 miles of sunny boardwalk over a gator, turtle, and bird infested swampy marsh. Incredible! The alligators were all over the place and both kids had a blast running along the boardwalk. In addition there were very cool Anhinga birds that wouldn’t move away as you walked past. We spent 2+ hours exploring this place!!! In fact I was the one who was dragging and ready to go. I had to coerce the kids back to the car.

We returned to our camp site around 5 and cooked some hotdogs for dinner and ate our leftovers from last night. Then it was playtime for the evening. Zoe is incredible at playing by herself. She brought a few ponies and played for a long time with them… when Avi wasn’t messing her up. He is not so independent and bugs her when she wants to play alone. Instead he played with me putting on my sunglasses, pushing around his train and A-10, and throwing the bouncy ball. We also scoped out our route to Bahia Honda key tomorrow. Later we took a super long walk around the camp village an adjacent lake. Avi and Zoe put on a show for me at the amphitheater. Ten we threw rocks in the lake hoping to entice an alligator sighting. No luck, thank goodness.

This evening as the sun set Zoe and I finished up her booklet for her Jr. Ranger badge in the tent to avoid the mosquitos. At bedtime, however, we got in the car and drove around to the campfire circle on the other side of the lake. There was a campfire party scheduled for tonight, and we couldn’t miss it. In fact when I first mentioned it to Zoe yesterday she was worried about our plans for the day getting in the way. There was a great turnout – about 25 people. We roasted marshmallows, introduced each other, played an animal sounds game, and then heard an Everglades ghost story. Such fun! Avi fell asleep on my lap after 10 or more marshmallows. Zoe needed pried away from a couple who brought their dogs, but then really got into the game. Both are now out like lights! What a great final Everglades night. Tomorrow we start down US-1 to the keys!! 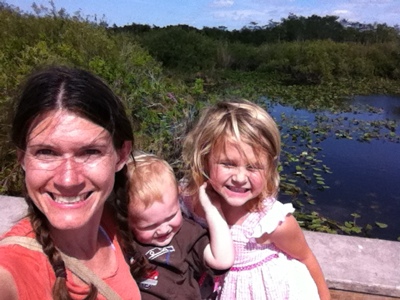 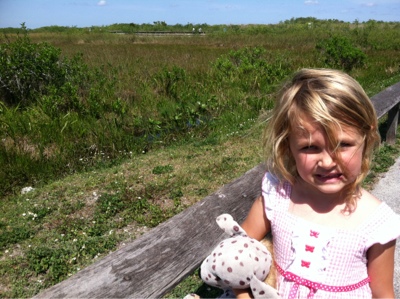 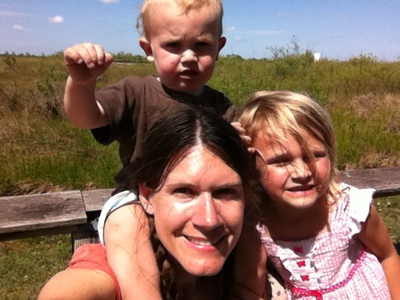 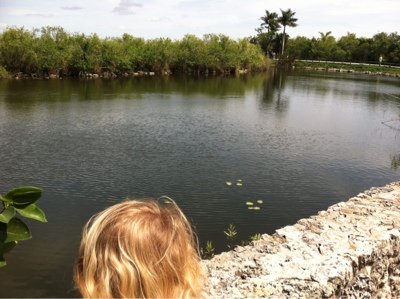