Today the fun was dominated by dolphins. We visited the dolphin research center on grassy key where we each got to touch and hand-shake with one! Our session found us on a floating dock meeting Aleta and Delta (her son). Aleta was a very good dolphin and seemed to really enjoy hanging out with people. Delta was still learning so he wanted attention and we were told not to touch him if he came over out of turn. Yeah right.
We started by putting our hands in the water and they swam by a few times so we could pet them. Avi loved this and just squealed and grabbed for that fin! After that we each got to kneel at the edge, put out our hands, and then a dolphin came up and we could hold flippers. Zoe was too excited by this and simply loved it. Delta was really into her, too, since she ignored the trainer telling her not to touch him yet. Oh well, a bit of extra dolphin love never hurt anyone. For Avi’s turn he sat in my lap and held out his hands. He squealed with delight when Aleta came up out of the water but then he backed off and got nervous as I tried to get him to touch her fins. So I did instead and he thought that was funny as she jiggled around.

There was more, too. At the center we could walk around and see all the dolphins (22) very closely as they played and chatted from the water. There was also a fun splash park that was a great way to spend the hour before our interaction session. Both kids needed some run around time after being in the car all morning.

I woke early today- before Avi- and started packing up. We would not be lingering at the Long Pine Key campground anymore; done with the Everglades! The kiddos woke and had a pop tart; these are special camp-foods that never make their way into our regular diet. Zoe and Avi were introduced to them while camping with my folks this summer. A typical ‘camp food’ request is now marshmallows, hot dogs, and pop tarts. So after that breakfast of champions I finished packing and we were in our way.

First stop: visitor center. Zoe completed the tasks needed for her junior ranger badge, and we needed to get it. The ranger was the same one from the campfire program last night and was so excited to see Zoe! She looked through Zoe’s booklet, read her the oath, and passed over that badge. It was great.

From there the drive got off to a rough start. We ran into a bike ride/race of some kind and couldn’t pass. The cops were preventing passing on the rural streets so getting to route 1 took us 3/4 of an hour instead of 10 minutes. There was also a good bit of traffic on the 1 so we spent 2 hours getting to the dolphins. The afternoon got pretty hot so we eventually said goodbye to the dolphins for the cool AC of the car. Our campground for the night was another half hour down the road.

Bahia Honda state park is pretty nice. I was able to reserve one night here, and while I was originally bummed it couldn’t be two, Im glad now as the beach isn’t all that awesome. Our campground is right on the beach which is super cool, but the beach is covered with seaweed! There is a huge piled-up line of seaweed along the whole thing. When we arrived the kids were taking a much needed nap so I left the car run the air while I setup the tent. Then we drove around to the other side of the park where there is another beach. No parking over there: too crowded. When the kids finally woke I parked at the beach near our campground. We played there for an hour or so. Zoe mostly dug in the sand. Avi swam with me for a while until he was hit by some flying sand. A very nice young man came and apologized, but Avi was still done with the water and kept walking up the boardwalk to leave. So, we did. Instead we came to our campsite and walked to the beach via the campers-only access. Much nicer and empty, but still with the seaweed and now some boulders too. Avi actually liked walking along the seaweed pile and Zoe found a perfect little rock inlet to ‘build’ a house out of sand and seaweed (what else?). Here we stayed for the evening until we were all just too tired and hungry.

Back at camp we took a long and much-needed shower. Then we had some chicken noodle dinner followed by a nature-collection walk with the Easter buckets. Avi found a cool little beetle and put it in a neato spiky seed pod. It occupied him all evening. Zoe made friends with the folks from Michigan just down the road. They showed us the days catch and taught Zoe how to walk with flippers on. These are adults.; it was nice to speak with some non-children for a bit. Tonight in the tent is nice and chilly but a lot louder than our Everglades campground. Here are more people and the loud route 1 cars driving nearby.

Looking forward to a real bed tomorrow! Not only am I tired of sleeping in a sand and dirt filled tent bed, but I’m itchy all over. I have this mildly visible rash on my legs and arms that I think is from the sand fleas at Jewel key. Not too bad but uncomfortable enough for me to spread diaper cream on myself for the night. Thank God neither kid has this.. I remembered long pants and sleeves for them. Plus I got bit to death packing up while they spent the morning in the tent. Oh well. Soak in a tub. NAS Key West for the rest of the week. 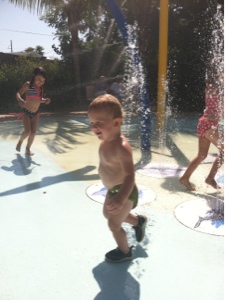 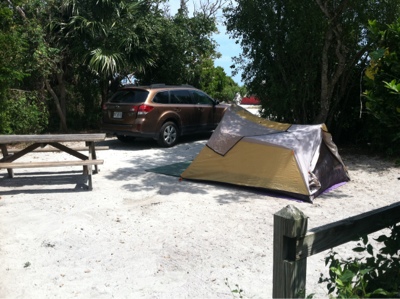 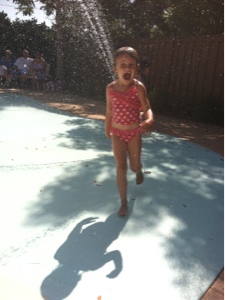 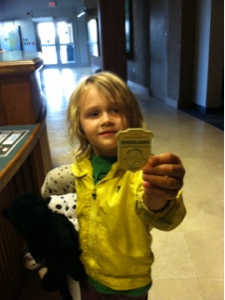 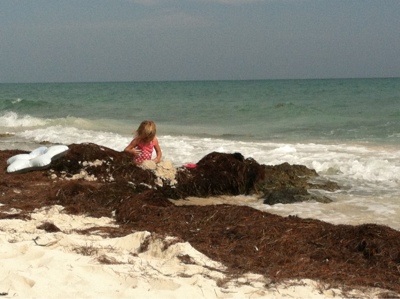 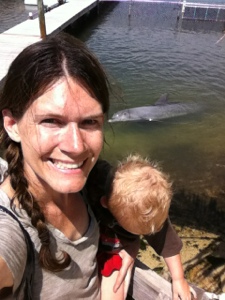 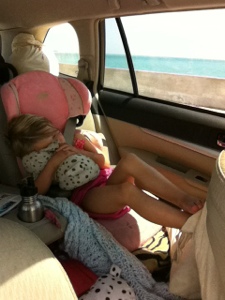