I have great kids! We did a lot of walking today and they remained happy and well behaved the whole time! This morning in the car Zoe even said today was going to be a great day. We started off slow with a leisurely breakfast and then a quick trip up to the Boca Chica section of the Key West naval base: now we’ve seen it all. I had to get a weekly pass for the car instead of the temporary day pass I got yesterday. It was easy and
gave us the chance to drive around up there. It is on the little island just north of Key West. Let me just say these navy folks are not roughing it. So far the base housing has varied in quality based on which part of base we visit, but many of the houses are waterfront, some have their own boat docks, and the base has a few different boat storage places with marinas…not to mention a couple beaches! Worlds away from crappy Valdosta and our tiny little Moody AFB.

Once we returned from our little trip lusting over the NAS facilities we packed up the stroller for a walk downtown. It isn’t far and the weather was nice. We began walking along the waterfront where Avi nearly leapt out of the stroller at the boats. He also yelled, “boot” at them all in his cutesy voice. As we made our way into town Zoe had fun picking everyone’s flowers that hung out onto the sidewalk and Avi seemed content to ride. We even saw some adorable little houses that Zoe wanted to buy. One pink one was even for sale. Hah. If only…. Our first stop of the morning was Hemingway House where I had promised Zoe and Avi the chance to see cats. They were so exited about this that I had two little meowers with me as I waited in line. As advertised, the cats were abundant and the kids had fun petting a few, chasing a few, and angering one which actually struck out at Avi. He cried and cried about it like his feelings were hurt. Poor guy just can’t stop yelling “ki-EE” at the top of his lungs when he sees them. It’s funny but doesn’t seem to attract the cats. We spent way longer than most folks at this place and finally left around lunchtime.

Stopped into a little cafe for a subpar lunch and tried the obligatory conch fritters that seem to be the dish of choice here in the Conch Republic. They were eh. I’d much prefer a crab cake. The kids had fun at the cafe, though, watching people go by and enjoying the air conditioning and our nice server.

The rest of the afternoon we spent walking Duval street – the main tourist artery. It was fun to see the funky shops and art stores. Zoe loves this one place that had a big dolphin fountain. She also thought the murals of the ladies on the side of one bar advertising nightly drag shows were quite beautiful… And they were. I’m sure they are fun in person, too. That will have to wait for a grown up trip ;). Other highlights were a man weaving baskets from palm leaves and a dog dressed in a lei. I got each kid an ice cream cone on the way which meant we got lots of comments about Avi. You know, “man, that’s the life” and “he’s really in paradise” kind of stuff. It was funny. Duval street morphs quite suddenly into an open air bar street as you near the port. This made it quite fun with lots of music and noise. It became apparent that a cruise boat must be in town, too, because those last four blocks were packed full if people (who apparently don’t get very far off the boat). As we rounded a corner Zoe got so excited she was screaming that there were two cruise boats! Yes, there were and they are gigantic pulled right there so close to town.

After reaching the end of Duval we started back to our calm little trailer on the navy base. At this point both kids got grumpy so I had Zoe (who had probably walked about 4 miles at this point) sit in the stroller with Avi on her lap and I walked at a mommy-pace back. It was hot and we needed naps. Around 3 pm we plopped into our beds for an afternoon snooze.

This evening we relaxed and had a great dinner at Thai River just outside the gate. It’s an outdoor restaurant on the second floor of a building along the marina. both kids were super we’ll behaved- we draw things and guess what they are while waiting for food. The surrounding boats and the sunset also served to keep their interest enough for a wonderful time. I had Pad Thai, but Avi ate almost all my chicken and shrimp out of it plus a giant bowl of rice. Zoe had sushi. After dinner we took a walk along the marina before coming back to the trailer for baths and bed. Tomorrow is an early day for us to catch our boat out to Dry Tortugas! 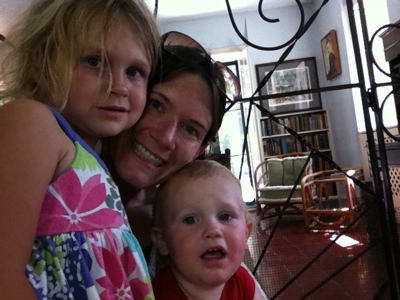 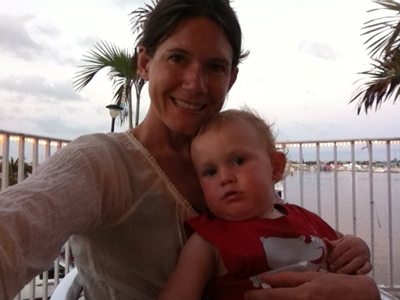 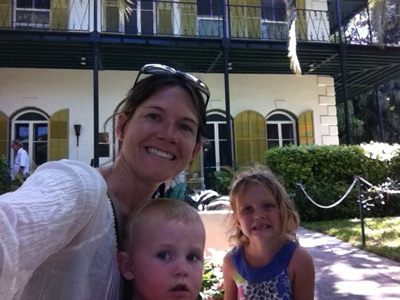 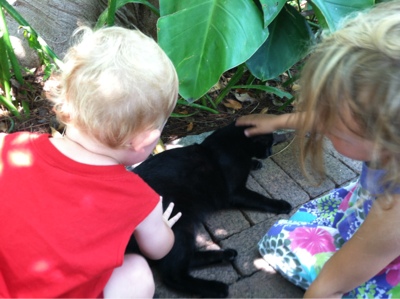 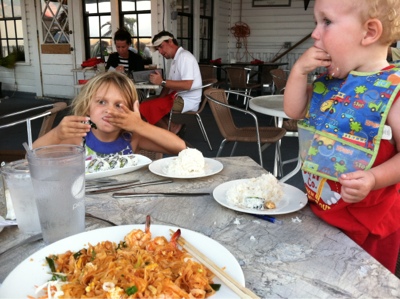 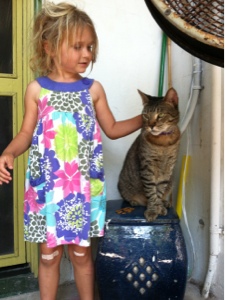