Today marked an astounding event. The kids and I got our national parks passport stamped at the Dry Tortugas national park! It’s the farthest park away from civilization and to get there was an adventure.

We woke before the sun this morning and walked a half our down to the marina to check in for our ride on
the Yankee Freedom. I booked our tickets a month ago and I’m glad I did because it was a sold out boat! Its a mid sized ferry boat with 2 floors. We boarded, stashed the stroller under the bulky storage area, and made our way upstairs to grab a seat inside. We found three seats open at a table. Once the boat was underway we walked downstairs where there is a lot more indoor seating and also the galley. Our trip cost included breakfast and lunch. I had Zoe carry her plate while I held Avi and my plate. It took us a while to eat and we enjoyed the company of the two ladies at our table: they were teachers on spring break too. The trip was 2 1/2 hours so we got busy talking, looking for turtles, wandering the boat, and hanging out on deck. Zoe and Avi were just getting antsy and starting to run around when we spotted the first island of the tortugas: there are seven.

The boat docks at Garden Key which is dominated by Fort Jefferson. It was built in the mid 1800s but never truly completed. We had a blast exploring this place. Unlike other park facilities it’s pretty open to walking around with the potential for falling off! Avi loved running along the arched hallways of canon windows. Zoe got busy finding all the items in her junior ranger book and took it fairly seriously since the boat crew offered a free ice cream to any new junior rangers. Of special note were the cool but dangerous spiral staircases up to the roof of the fort walls. Zoe loved being up high and was super careful not to go to the edge. I held Avi as we walked along the roof; it is 3 floors up on the inside of the fort but much higher on the outside down into the moat. Zoe liked pretending to bake in the old brick ovens. Avi found a nice 4 foot long piece of board and insisted on carrying it around for an hour. Zoe held the other end which worked to keep him close. I felt like I had a preschool group.

Around noon we ventured back to the boat for lunch – sandwiches, chips, and the kids favorite: watermelon. We ate in AC of the boat and then grabbed the beach bag for some water fun. The other reason people come here is for good snorkeling. Our tour included snorkel equipment which Zoe was super excited I try. We grabbed a kid set for her and she helped me pick some pink flippers for myself. Then we harched down to one of the two beaches. I brought both life vests for the kids to make snorkeling a possibility. We suited up and headed in. Zoe loved the flippers and sticking her face in! She tried the snorkel a few times but couldn’t quite get it so I took it off. I mostly just tread water holding Avi and stuck my face in every now and then. We weren’t seeing anything cool, but having a fun attempt. Except Avi. He hated something and it took me a while to figure out it was my mask. He hated it and would freak out when I would put it on so I gave up snorkeling and simply had fun swimming. Eventually we beached ourselves and Zoe played on some old wreckage while Avi jumped off it.

I was getting tired and hot so we finished up Zoe’s junior ranger pack and took it into the visitor center to get her badge. The ranger gave Avi one too for being a good sport. At the time he was screaming mad that he couldn’t take all the plastic turtles out of the shop.

With an hour left to departure we were over to the second and closer beach just past the camp area (yes I was tempted to campout but it was too pricey). This beach was nicer with a tad bit of shade and we actually got to see some cool colorful fish. Zoe was excited about that and put her snorkel stuff back on to check it out. I tried but it made Avi mad. He and I could see them from the surface anyway and had fun splashing around. At 2:30 we for changed and quickly made it back to the boat. I thought it would be fine to be there 15 minutes before it left to get our seats again. Well… We were the next to last to board. The crew were all packed up and pulling the gangway as we crossed!! I didn’t know what to think and checked my clock. It was 2:50 an the boat was underway! Whew!!! We almost missed it. I’m still a bit perplexed about that since I doubled checked the sheet and it said departure at 3. Everyone else was on though so I must’ve missed something. Oh well, we made it and got the kids’ free ice creams with the junior ranger badges. Avi nearly fell asleep as he ate his ice cream sandwich and crashed in my arms with his final bite. Zoe also finished hers and promptly laid herself down in a tiny ball to snooze. I plopped my head on the table and got a bit of rest too. The trip back was a lot bumpier and rough ish. It seemed quicker than the way out.

Back at the marina I loaded Avi into us stroller and cleaned a pile of sand out of Zoe’s shoes before walking the mile back to our trailer. No complaints! I was tired but Zoe was refreshed and chatty, as was Avi. He has become a little talker lately. I made some dinner and we spent the last half hour of daylight out at “the beautiful forest” of 7 trees by the fence. What started as a wild kitty finding mission (they are here on base too) ended up in a tree. Then it was baths, Skype with Bryan and bed. We all got a little extra sun today… I’m a bit burnt in a few spots I neglected to touch up. Of course I was vigilant with the kids’ (especially Avi) sunscreen and no so with myself. Maybe we are done with beaches. 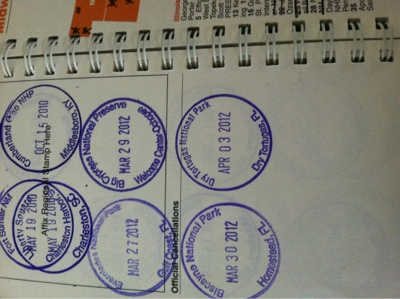 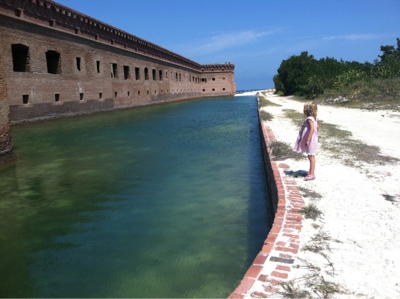 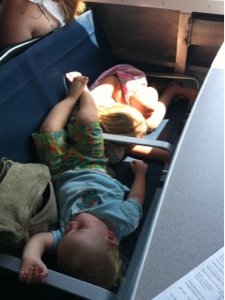 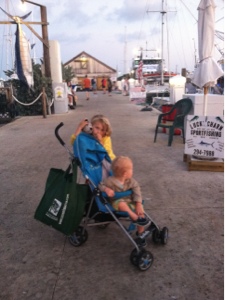 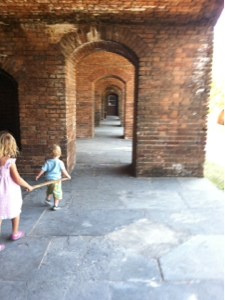 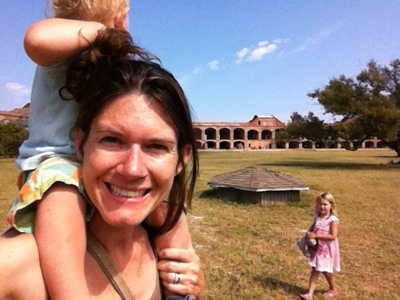 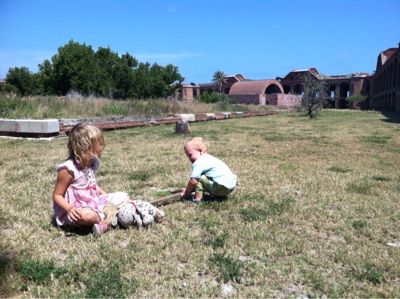 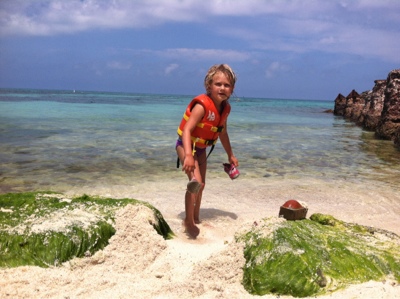