Skip to content
OK, we’re not really DOING Disney we are just staying in Orlando for a night. It meant a LONG day of driving today, but gives us a day to mess around here with only a 3 hour drive tomorrow.  We are meeting Bryan tomorrow night!!  Finishing up our loop around Florida with a kayak trip down the Suwannee over the weekend.
Last night there was a big storm in Key West.  It kept me up a bit and woke Avi who has been sleeping pretty well this whole trip.  Needless to say, I was tired this morning but still got up early knowing that our 7 hour drive from Key West to Orlando was really going to be about 9….and it was.  We stopped a few times for gas, for snacks, and for run around time at a playplace.  It was long, but fine.  Zoe is an incredible car rider and entertains herself in an amazing way.  Avi not so much.  Zoe even tries to entertain him.  I’ll look back and she will have gotten out his tray table and a coloring book for him.  He will color for a short bit, but not an hour or so like her.  Eventually, our 2 1/2 hour initial push from Key West to Homestead made him falll asleep not long after a gas stop.  The driving was pleasant again until the last hour when he woke and got antsy and needed toys and books and snacks handed back at him.
We are staying in the Travelodge Inn & Suites East Gate Orange.  I Pricelined this hotel for $25.  It’s great!  Seriously.  The “Orange” in it’s name is descriptive of the GIGANTIC orange shaped citrus store next door.  Our room is sizeable with 2 beds and a front area with a table, 2 chairs and fold out couch.  The pool is also great.  It’s super warm and has a hot tub and kid pool  There is also free breakfast and a playground.  Pretty great for $25!  I’d stay here again if I was coming to Orlando and needed a cheapo spot.  It’s not far from Disney, either.

First on the agenda for us was swimming.  I checked in, and we spent 10 minutes in our room.  Just long enough to get into our swim suits.  It was great to have those kiddo’s unwind in the pool after such a long driving day.  After that the fun came!  Since we are here I wanted to take advantage of all the FREE Disney junk-o-la, so we headed to Disney World.  I parked at the Polynesian after being let in without paying; probably because it was so late in the day (like 6pm) and I was asking how to get to the Polynesian.  Got a stellar spot right at the entrance, and we walked in.  This is such a cool resort.  I’ve always like it.  The monorail was our first free fun for the night.  We rode it from the Polynesian around past the Magic Kingdom and stuff to the Transpo center where we switched to the monorail for Epcot.  Avi just ate this up.  He nearly leapt out of his stroller when we walked under the monorail, then squealed when he saw it pull up next to us on the platform, and bounced out of his gourd as we rode around.  We got a seat by the window and both kids were plastered to it.  Zoe recognized stuff at Epcot; that is where her favorite attractions are.  Avi pointed out boats and other trains as stuff whizzed by.  Waiting in line for the Epcot monorail took about 20 minutes because 2 trains were having troubles.  A Disney employee came around and gave everyone free Fastpasses (the short line at major rides) for Epcot.  To bad we don’t actually have tix for going to the parks.  I’ll find someone to give them too.

Once we returned to the Transpo center from Epcot it was getting quite dark and we had a half hour before the Electric Light Parade.  This is a fun, old school, cheesy, water parade of lights and music that goes by the resorts on the lake near the Magic Kingdom.  I remember it from my childhood, and love to watch it.  We walked back to the Polynesian for the parade.  Zoe loved that all the walkways are jungle-like and lit with tiki torches…she kept giving me high-fives for the ‘fire walkway’.  Eventually we found the beach after lusting over the nice pool they have (though it’s likely not as warm as ours).  Zoe picked a nice spot for us to settle down and began building a castle.  We had about twenty minutes to kill so Avi and I wandered up and down the beach where he found a drake and a mama duck warming her brand new chicklets.  He kept yelling “chick chick” at them until I said, “no they are ducks” enough times that he started yelling, “duck-he duck-he”.  I had to pull him away from there, but he remembered and ran back to check on them throughout the evening.  Our spot was stellar for watching the light parade.  Avi was mesmerized and did not move from my lap the entire time.  Zoe had fun naming the things in the row: a sea serpent, a whale, a turtle, dolphins, seahorses (Neptune), a brachiosaurus, and there was an octopus in there somewhere.  She’d remember.

After those thrilling 15 minutes we had to wait another 45, until 10pm, for the fireworks to start.  The Polynesian beach is just the best free spot to watch all this stuff.  You have a straight shot view of the Magic Kingdom castle…which keeps changing color at night, BTW.  It didn’t seem like a long wait – Zoe played in the sand, Avi terrorized the ducks, we had some snacks, and then it was time.  By now, the beach had crowded out a bit and all the spare lounge chairs the kids were playing on were taken.  As the music started we settled onto our chairs for the show.  Avi was sleepy and had just gotten fussy 5 minutes prior.  The fireworks entertained him enough to hold off the sleeping.  Zoe loved it, and chatted most of the show about the different colors.  I secretly hoped it irritated the old farts who had pulled there chairs almost directly in from of ours…..we just scooted ours to the side a bit and kept our amazing view.

At the end of the fireworks Zoe declared loudly that she was cold and had “goose lumps”.  I plopped Avi back into the stroller and he nearly instantly fell asleep.  We walked the short distance to the car and headed back to our cheapo hotel.  Zoe joined Avi in sleepy land before we were out of the parking lot.  Tomorrow we will sleep in!!!  Then we will checkout the free stuff along Downtown Disney before driving north.  Goal: ride a boat. 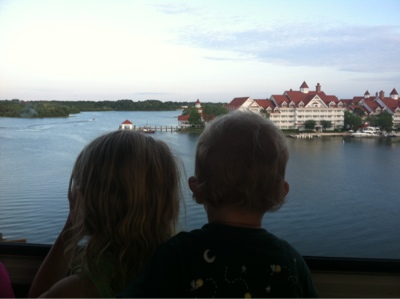 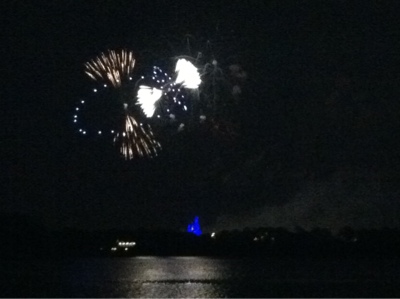 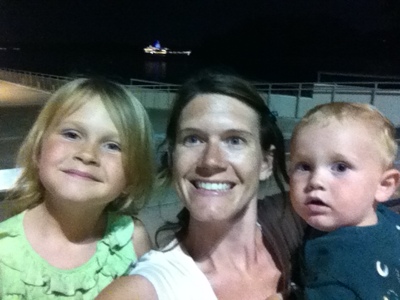 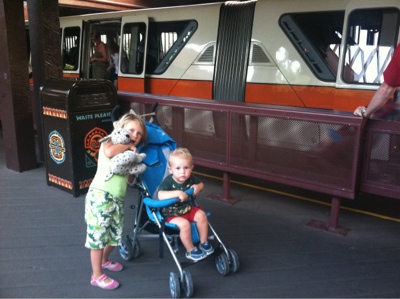 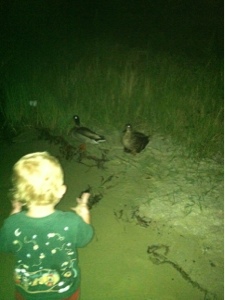 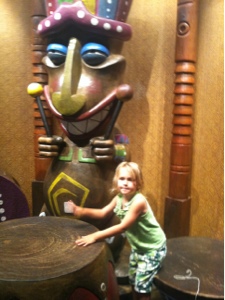 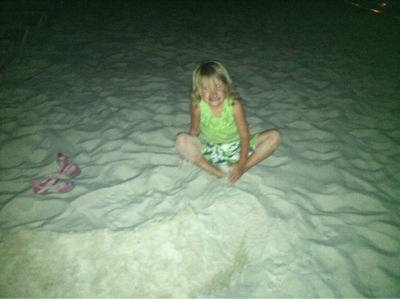 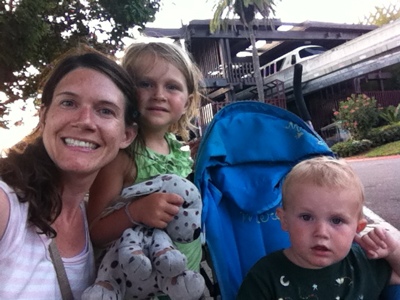