Well, we are back on the road!  We had a wonderful time visiting family, but I’m ready to be moving on.  I’m ready to start a new adventure. I’m also ready to get to Korea and see Bryan.  But first, there is Boston and our train trek across the country.  Day one done.

Yesterday Bethany, the kids, and I loaded into the car and left Nan and Grandpa Joe’s house to head up to Boston.  We’ll see them soon at my cousins wedding, so no tears shed yet.  The drive was long – took us 11 hours as we stopped 3 times.  The first was for lunch at a place with a playland, and then I HAD to stop at Delaware Water Gap and get my NPS passport stamped.  This is a bit of my obsession; to eventually visit all the National Parks and get my book stamped.  Unfortunately, Avi fell asleep after lunch and woke after the short hour it took to get here.  But, on the bright side I was able to get my free military parks pass!  It also gave us the chance to get out in some fresh air.  I don’t like to just stamp and go.  We waded in the water, watched the boats, and Avi had fun screaming with joy about the backo repairing the train tracks across the river.  Then, back in the car for a winding scenic drive up through the park and back on the freeway.  The rest of the trip was easy.  The kids do great in the car.  We only had to break up about 3 minor battles.  Mostly Zoe plays with her ponies, colors, or otherwise occupies herself.  Sometimes she will help Avi get his coloring pages out.  Mostly he plays with his airplane or helicopter, scribbles a bit, or sings and sleeps.  They both have a good stare out the window, too.  It’s so important for them to understand how to be bored.  No TV in our car!

Our hotel was not memorable.  The other occupants were.  There was a huge busload of Chinese teens staying with us.  All the boys were playing wildly in the pool and Zoe jumped right in the play, too!  She loved all the waves they were creating.  Avi also thought they were cool, and kept getting out to jump in just like the big guys.  Thank goodness sleep came easy.

Today we ventured to Plimoth Plantation.  It’s a living history re-created village of the original Plymouth colony.  It was excellent!  There was a great intro video dispelling myths that the pilgrims were solely seeking religious persecution; they were also here for the cash.  The video also delved into the original people’s history: how the Wampanoag lived, and how they suffered from European diseases and slavery even before the pilgrims arrived.  It was good to get a well-rounded perspective from both people groups before entereing the Wampanoag village.  Here are people with native american heritage dressed as they would’ve in the 17th century (well, a little more covered), living (for the day) as the wampanoag would have.  There was a guy burning out a mishook canoe, there was an older lady weaving a basket, there were lots of men in the bark-covered buildings talking about daily life, interacting with Europeans, and building the huts.  Avi mostly loved the run in the circle around the garden and jet in and out of the huts. Zoe listened to the people and explored.  One lady had kids’ toys which was cool.  Both our kids sat down to play with the simple items; a ring toss game designed to teach patience and skill, dolls handmade by the little girls to teach sewing, and a tiny canoe the kid burned out himself to learn that skill.  Zoe also found it super cool that the little girls would get to sit up in a treestand most of the day to be loud and keep the crows away from the garden.

From there we ventured to the crafts barn where modern people are making pottery, clothes, and other items in the traditional ways for the people in the 1627 village to actually use.  Back in that time they would have still been importing these things from London.  As we walked into the village it’s like we stepped back in time; but to a time nonexsistant where people let you walk around in their houses unannounced.  The village goes down the side of hill – starting at the top is the town hall/church.  The whole thing is fortified within a wall, and above this building is the watchtower…to watch out to sea, but also to watch the Wampanoag or any other native americans that may wish to interfere.  As we walked down the hill into town we were impressed to see men in pilgrim outfits – sock bloused trousers and wastecoasts – on top of one house repairing the thatch.  For real repairing, not just pretending.  Twas cool.

Inside the first home I spoke with the one lady for a while about kids and childrearing.  The takeaway was that children are like branches. When they are young and green they are pliable and moldable, but when they are older they become firm and will break.  Keep them in line young.  As for Avi and his running amok.  He needs leading strings.  I’m to sew some long strips of fabric on the shoulders of his clothes and then use those to tie him to something – like a bedpost or fence – so he can’t run.  Then when I’m ready to walk him he will be forced to stay cloes. He will learn his place.  So funny, and true.  Wish I could do that.  Not sure it’s legal anymore.  He really did have fun running around, playing in the dirt with a little Mennonite girl, and feeding the goats.  The goats and chicken chasing were the big attraction for Avi.  And for Zoe, for that matter. She loved figuring out which grass the baby black one liked the best.  She also found the homes very interesting.  We could explore inside each one, and while they were all tiny and similar they seemed lived and layed out differently.  Built with waddle and daub, then wooden siding, and a thatched roof.  I think they would be snug except for the straight-up fireplace.  There were lots of folks dressed in period costume that assumed a character and answered questions as if they had just arrived on the mayflower.

The Mayflower – that was next.  We drove down into the town of Plymouth and parked up the hill at the free parking lot near the old old old graveyard.  Then we walked downhill and found a pizza place for lunch, wandered a bit by the water, and then went on the Mayflower 2.  It’s a true to life re-creation of the Mayflower that was built in England in the traditional way and actually sailed across the ocean to Plymouth.  It was tiny – impossible to imagine so many people crammed on this little boat.  Zoe got to pretend she worked on the boat by tosssing a water bag over the edge to lift water and keep the deck wet.  Avi crawled around on the little bunks and ran all around in the lower level.  He wanted to go up and down the stairs mostly.  Zoe thought the little food-storage room was the best spot.  That would be her room.  I didn’t have the heart to tell her 20 other people would cram in with her.

To round out the day with messed around on the beach just south of town.  It was kind of rocky, kind of sandy, and the water was cold.  The kids didn’t care.  They ran around finding rocks and getting cold and wet.  Both of them chased and fed the hugemongous seagulls. Eventually we just had them strip down and ride back to the hotel naked and toweled.  Another big day! 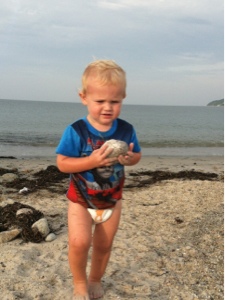 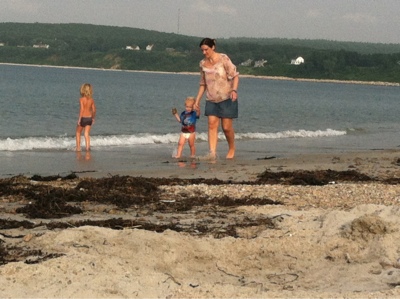 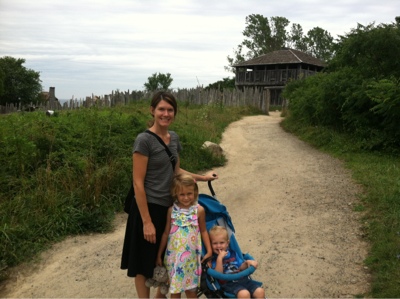 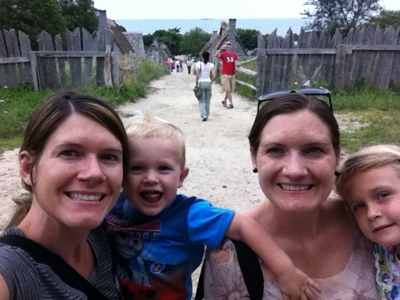