Today we took an easy tour of Boston.  We drove downtown and parked in the lot under Boston Commons.  Then we spent some time on the Common.  The kids ran around on the playground, and played in the splash park.  We had dressed them with swim stuff under their clothes on purpose.  After that we topped off with dry clothes and dry undies before taking a ride on the carousel.

Both kids plopped into strollers – yes, I did stroller around Zoe.  She is 5 and too old for that, but we were going to keep a quick pace so it was just easier (lazier, yes).  It worked great, however, as we followed the red line of the Freedom Trail.  This is a free tour around Boston to do on your own.  They offer tours, but that is just not our style (and costs money).  I downloaded the free Freedom Trail app from the National Park Service and we were off.  At each stop I would read a bit of history and we would press on.  The most interesting are, of course, the graveyards.  Well, they call they burying grounds.  Anyway, we found Paul Revere, John Hancock, and Sam Adams.  Zoe had fun looking and walking around the graveyard.  Avi mostly rode along.  We popped into a church or two and then found ourselves at Fanueil Hall.  This was our spot to get a stamp and our turn around.  We just didn’t have time to finisht the walk and saw some highlights. Grabbed a treat in the Quincy Market.  Zoe picked a Baklava – one of her favorites, and Avi got a chocolate covered pretzel.  Then it was back in the stroller for a walk back to Boston Commons.  We plopped down to finish some treats and feed the squirrels before getting the car from the parking lot.

After that we took the T to Harvard so Zoe could practice being a flower girl for Eric and Maria’s wedding tomorrow!  She was amazing. The wedding is going to be so great.  Took the T back to the car and drove through some crazy roads and crazy traffic to the hotel. This evening we spent time with the fam watching the Olympics.  We met up with Nan, Grandpa Joe, Uncle Tyler, Granddad, and Uncle Tom.  All here for tomorrows wedding!! 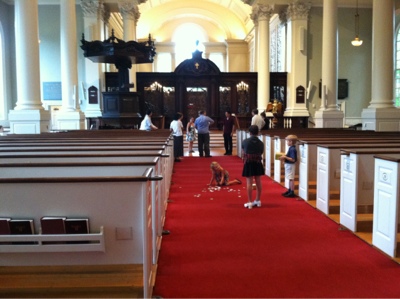 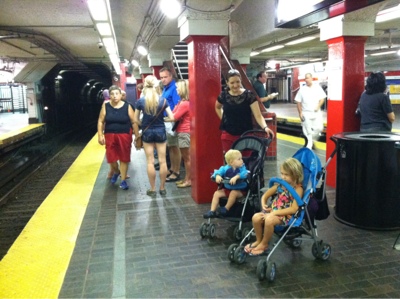 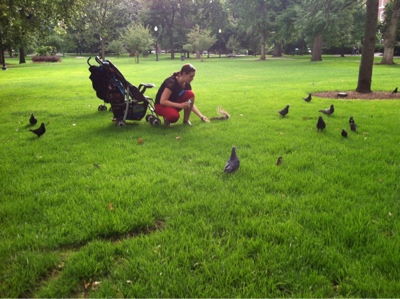 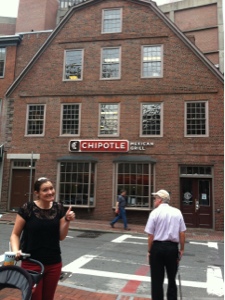