Woke well rested this morning and ready for a fun day! Our second day in Boston found us getting a leisurely breakfast and then heading out to walk to the Boston Science center. Bethany was a trouper as always and joined me and the kids for the day. Tonight my cousin Eric is getting married, and his reception is at the center. So we have free passes for the day that we were antsy to use.

Our first stop was the dinosaurs, of course. Avi ran around pointing at each one and squealing “Dino sore” or “tops”. Zoe was much more involved in the displays. She watches the videos, learns about the Dino’s and even gave me a lesson in telling a real fossils from a fake. “because I’m a paleontologist I can just know, but you can tell because a pretend fossil feels wrong. Like wood”. She is so smart! The next set of displays across the hall were about nanotechnology and Zoe was enthralled! I was shocked that she patiently went to each display and listened attentively to the audio guide and then did the learning activity. She even told me what a few of the lessons were all about! I have no clue about nanotechnology and now have a slight understanding of what it simply means, but Zoe seemed to actually get it. I was a bit preoccupied with Avi at the time so that is my excuse. He and I were pushing the buttons on the train displays to watch them go!

After a bit Bethany and Avi wandered to the classification display where Avi loved opening all the drawers of stuff. Zoe and I learned about solar panels before listening to a show about nature in urban areas. It was a fun recording set in a little studio that looked like a city block. Once that was done we met up with some more family and went to watch the live animal show. A jaunt through taxidermy birdland and we arrived at the little theater. The animal of the day was a gorgeous brazilian rainbow boa. Zoe was absorbed and involved in the show. Avi, however, wanted to run up and squeeze the thing, so he and I left for the kids Discovery center. Zoe spent the rest of her time at the museum learning about the moon and bugs. As long as she was hanging out with cool uncle Tyler she was happy. She loves uncle Tyler! He never needs to tell her to listen or follow directions like me and Aunt Beppy.

Up in the discovery center Avi and I spent about 20 minutes playing with a giant light bright. Then we wandered over to see a huge frog in a display we could pop our heads up into. We saw the frog and Bethany! She came to hang out with us. We looked at birds with binoculars out the window and played with the contents of the dinosaur box before it was time to go. Met up with the rest of the gang walking back to the hotel. Time to get ready for a wedding!!!!

We tried to get the kids to nap as we got ready but that didn’t happen. Bummer. Zoe was a trouper as I curled and sprayed her hair and poked her with bobby pins getting in her little crown. She was a beautiful little flower girl. Avi wore his little man suit and went with Bethany and the rest of the fam back to the science center for the wedding shuttle bus. Zoe and I took granddad in my car. She got special flower girl privileges, the biggest being the right to drive in Harvard! No joke the campus is completely gated, but 5 cars were allowed access for the wedding and Eric let mine be one of them. It is pretty crazy pulling into the Harvard gate and driving on the sidewalks up to the church. Granddad “had his doubts”, but I knew we were cool. Parked right at the Memorial church! It was great. Zoe needed to be early so the shuttle wasn’t an option. She spent every moment up to the wedding practicing dropping petals with a smooth slow walk. She has taken this privilege so seriously! When wedding time came I went to my seat and left her in the back with the rest. Her turn to walk came and he was amazing!! So cute and slow and perfect petal dropping. She was then so exited to watch Maria come down the aisle and was obsessed with her veil. The wedding was beautiful. Zoe had a rough time sitting still for the ceremony. Hopefully it wasn’t too distracting. Avi was a dream. Literally. He fell asleep in his stroller on the way there and slept the whole time; even when the organ was playing its loudest!

Once pictures were done it was on to the reception. Unfortunately the rain kept the party under cover but the location was awesome. Right on the water downtown Boston. The food was great and we had a lot of fun. Zoe even gave a speech when Uncle Bill opened it up to anyone. She raised her hand and said “i just have a few words” then talked about how she had a lot of fun being flower girl and “people told me I was a good flower girl and they were right” and that she would like to do it again sometime. It was hysterical! The evening wound down with too many goodbyes and not enough time. Congratulations to Eric and Maria!! 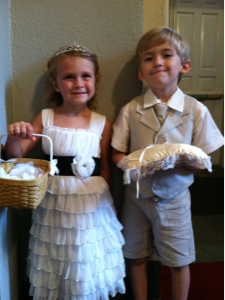 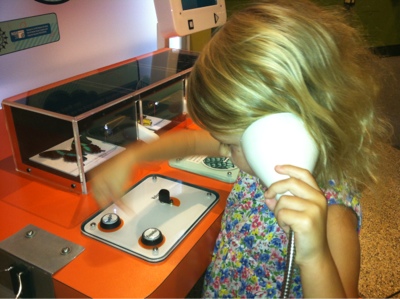 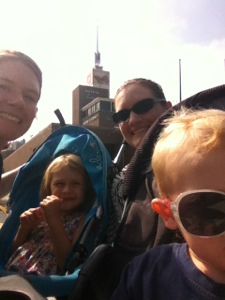 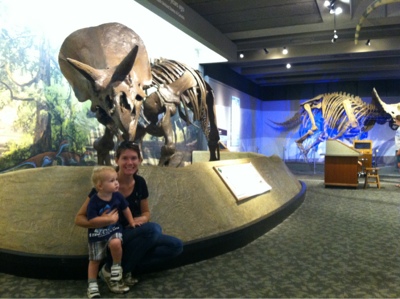