Well Zoe, Avi and I slept pretty well last night on the train from Boston. I woke early when the sun came in our window and stared at the corn fields and farms for a long time. Once the kiddos woke we headed back down the train to the dining car for breakfast. The food on the train is tasty and portions are large. The servers are busy and stressed out though. Seem like they needed two dining cars as there was always a line. The kids and I get priority seating as first class passengers, but I still had them squash with me on one side of the table to make room for others. A mother- daughter duo from CA sat with us. Zoe picked the French toast and ate about half of the giant kid platefull. Avi and I shared a scrambled eggs, bacon, grits platter. Mostly he ate bacon.

Back in our roomette we had time to play as we watched the corn fields slowly turn into city. Our room attendant had put our bed back into two chairs so it felt roomier again. Avi and I colored and played with his train sticker book. Zoe spent the morning wedging herself into the overhead storage and arranging her stuff. Soon the traffic and sights outside were more interesting so we packed up and watched the city approach. We were in Chicago!

I loaded Avi into the stroller and hung our overnight bag on it. Zoe carried her bag as we walked off the platform and into Union station. We followed signs to the lounge; I was told we could store some bags there for free as sleeping car passengers. Sure enough the first class lounge has a bag check, so we dropped off our overnight bag and the kids’ toy bags before getting outside to explore the city.

outside we walked just under a mile directly east to the city park along the water. Along the way was a giant construction zone full of mighty machines that Avi soaked up. I think this was a highlight of the whole trip for him. Eventually we walked on to the park and it was kind of crappy. Not only are all the grassy areas trapped behind hedges but the big fountain is also fenced of. Plus there were workers everywhere putting up fences and tents for an event. We stopped in a tiny patch of the only shade available and had a snack while I used the phone to find something better. Aha. Just north a couple blocks was a play fountain. Zoe was a trouper as we trudged on in the heat, but she said “if I would space-A to here I would skip chicago”. Agrees the city is not finding much love from us today. But it turned out to be well worth it. The big fountain was basically two giant cubes with water rolling down them separated by a huge 1/2 inch deep infinity pool. Zoe ran off happy as a clam which got her in trouble since I said to stay close. It’s the first I have had to punish her since we got started. Not acceptable to be out of my sight and boundaries on a trip. Then Avi slipped on the ground and bonked his head. Poor guy. Our rough start was rewarded, though, with a great afternoon of play at the fountain. The rest of our time was a blast and helped burn some energy. In fact Zoe and I needed to keep Avi awake long enough to get some lunch and walk back to the train station. Another glance at the machines digging was a good sleep-preventer.

So my plan was to stroll into the first class lounge around 115pm, get a snack, bathroom break, and be ready to board at 130. Then we would nap on the train. Perfect timing . Perfect plan. Perfect doesn’t exist with Amtrak. Our train was delayed because something was wrong with the dining car. Ugh. Avi zonked out in the stroller and Zoe quickly fell asleep on one of the cushy lounge seats. Plan ruined. Luckily they slept for about 2 hours after which we finished watching Marmaduke. At that point there was still no word on our departure time and Avi was screaming to get moving so we went upstairs to the food court for some ice cream. When we got back it was time to board!!! Almost 3 hours late.

Out on the platform we had to walk 10 cars down – which is pretty far- to ours at the front of the train. We are just behind engine. This is the Empire Builder which goes all the way to Seattle. The Superliner cars are double decker. Our sleeper is another roomette but it’s a bit older style than the one we had last night. The bunk folds down and doesn’t have a view of the window. The storage isn’t as genius. The biggest thing is that it’s not outfitted with a little potty and sink. That was cool. Ours is down the hall. The window is still nice and big. Zoe claimed the bunk again, but once night came it was a bit too dark for her so she and Avi are sleeping on the bottom while I crawl up.

We came back from dinner in the dining car and spent an hour or so playing before making up the bed in bottom. On this train we were asked to reserve a dinner time. The dining car attendant came around to make those arrangements. Our choices were 630 ish or 830 ish. I definitely took the 630 seating and we arrived promptly after spending our first hour on the train getting arranged, spilling pretzels, and Skyping with Bryan. At dinner a singe guy was seated with us. I worried at first that it would be miserable but he was super nice and thought the kids were fun. He is an acupuncturist from Missoula. Neato! Zoe ate all her salad and a hotdog for dinner, Avi ate a bun and I had the crab cakes. Yum. For dessert was raspberry sorbet and raspberry cake!

Back here in the room I’ve enjoyed watching the scenery even though we are on a lower level. Seems a lot quieter down here since the main connecting hallways are upstairs. Its good the kids are away from the crowd as they has a song and dance ‘party’ with their little flashlights. We are still running about 2.5 hours late, though i
Im sure they are trying to make it up. I was able to see the Wisconsin Dells – a pretty cliff lined river – as the sun set. Now the kids are asleep so I’m going to climb up to my bunk for the night. Tomorrow we are on the train all day to East Glacier! 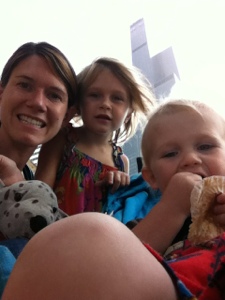 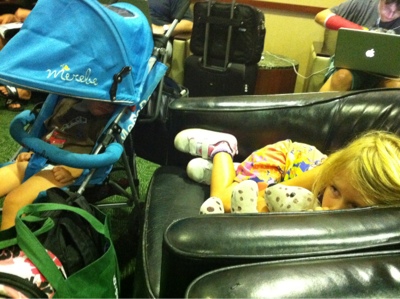 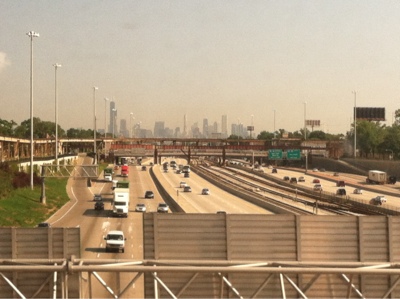 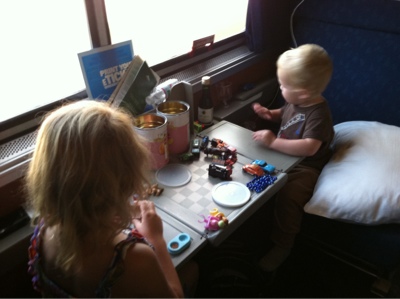 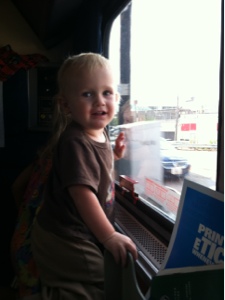 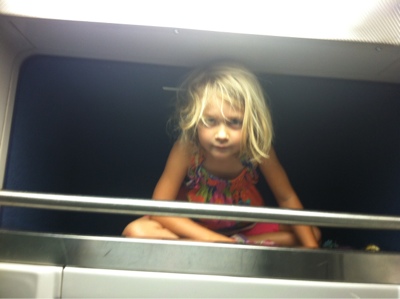 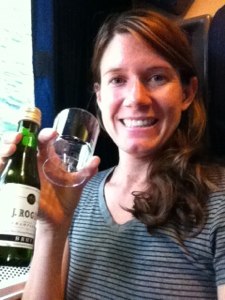 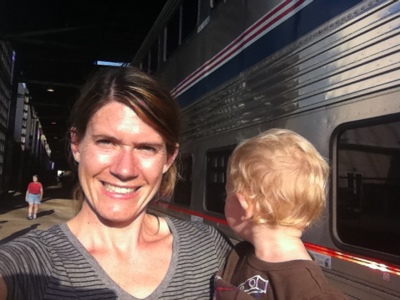 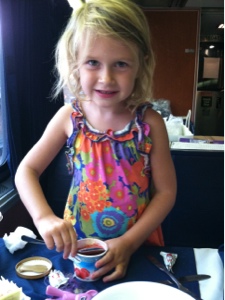 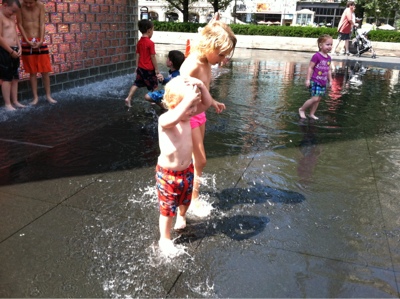 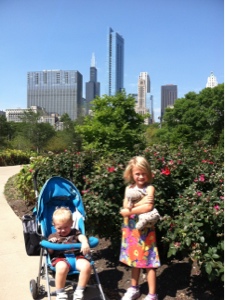 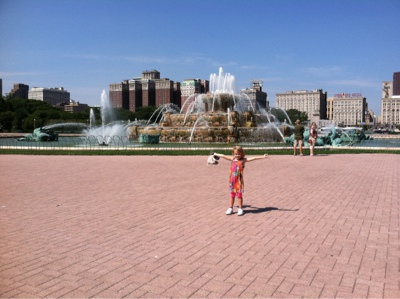 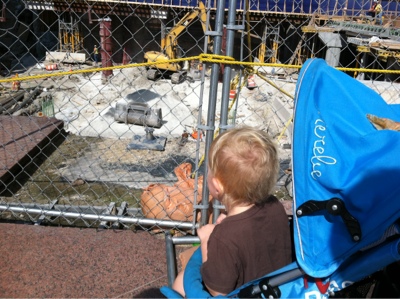 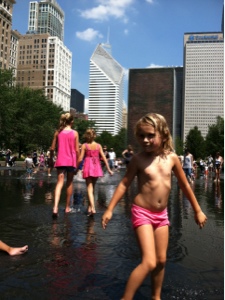