So this will be a blog filled with words like “amazing” and “spectacular” because Glacier National Park is both amazing and spectacular.

After we woke up in our East Glacier cabin we walked down a block to the Dollar rental car. Well I was shocked out of my gourd to find our rental to be a new 2011 Outback just like our car in Korea! Dark gray though. I put in Avi’s car seat that came with the rental and Zoe’s little booster.. We loaded up and drove north.

The drive to the park entrance at St. Mary is about 31 miles and was already simply gorgeous. The mountains rise up in the west and the rolling plains stretch out to the east. The mountains are just so amazingly huge and dramatic compared to the grassland. We stopped so many times to simply get pictures. At one point there was a crystal lake reflecting the mountain so we stopped for pictures and found wild blueberries! Yum. As we drove Zoe even mentioned how pretty it was and how she was happy I planned this trip. The weather was also so nice and warm. The sky was so deep blue. It was spectacular. And we weren’t even to the park yet.

Once we finally got to the visitor center I was so thrilled to get my passport book stamped. The center focuses on the receding glaciers and Blackfeet Indians. The kids loved listening to the Blackfeet animal stories in the audio displays. I am glad to be seeing the glaciers before they disappear. Our adventure for the day was to drive the Going to the Sun road through the heart of Glacier National Park and then looping south along the wild bear wilderness and lewis and clark national forest. Again the scenery was amazing.

Once in the park we stopped for a hike to go see Baring waterfall and play in the water before we gained too much elevation. The hike was great! It followed the rushing water downstream most of the way and veered through the woods for a little bit before opening out onto a log bridge at the base of the falls. I let Avi and Zoe walk for the first section along the water so they could put their hands in and feel how cold the water was. Avi then rode on my back in the kid carrier – he fought getting in it but then seemed to enjoy himself once he understood what was happening. It was only a half mile hike but very fun. Zoe ran most of the way down! At the falls we got some pictures and then the kids spent a long time throwing in rocks and having a snack. Hiking back up to the car was slower but Zoe didn’t complain. She stopped a couple times for water and we talked about the plants. Avi walked for a ways too and then sat down refusing to budge so I got him on my back again. He was hot and tired I think because he cried about it for a few minutes and then almost slept. As soon as I put him back in the car he was sleeping. Zoe and I enjoyed many of the other pull outs along the road up to the continental divide. The road wasn’t super crowded so we could simply pull out, look over the edge, take a picture and move on.

The highlight for Zoe was her chance to touch snow. This was the thing we had been searching for all day. There were still some huge patches of snow on the mountain but none yet along the road. There is a hike at Logan pass – the high point on the road – out to a viewpoint and a huge field of snow. When we arrived up their I realized why our drive had been so enjoyable and people free. They were all here! It was a crowded mess. The parking lot was full and folks were parked all along the roads. Not for us. Plus Avi was still sleeping so getting him out and into the kid carrier for a crowded hike didn’t sound like fun. Instead we kept along the road and found an awesome snowbank pullout with no one around!!! Zoe loved it and claimed that winter is her favorite season… and how far away is it? She even ate some of the months old snow under the crusty top. Too funny!

After that we continued our drive down the west side of Going to the Sun road. This is where a ton of other people are… Stuck in traffic. There are crews fixing the road so it is a giant back up. We just happened to get the timing right and only waited 5 minutes for the one way to be our direction. As we came out the other side I could see people over there had been waiting the half hour we were warned about in the visitor center. Now both kids were sleeping so I enjoyed the drive down on my own. The west side of Glacier is certainly not as dramatic looking since it is forested. The openness of the plains on the east side afforded us instant views. Over here you are mostly in the forest – a beautiful thing in its own right. You are also along a gorgeous rushing river called McDonald creek. Not a creek. I got out to see it a couple times and Avi woke. So now he and I had fun stopping to see the water at the pull outs. After we exited the park we drove along route 2 back to East Glacier. This drive is also quite pretty through a steep treed valley with the big Middle fork of the flathead river. There were tons of rafting group shuttle buses along here. The river did look super fun to kayak! Eventually Zoe woke so we used one of the boat launch access points as a break place. The kids ran around on the rocks, waded in the calm creek that was joining the river, and played in the sand. Zoe collected some special rocks – that SHE will be carrying in her bag. Avi mostly got to be a complete mess smearing sandy dirt all over the big rocks. We watched the train go by a couple times. That will be our route out tomorrow evening. Hopefully it’s close to on-time as I would like to see the scenery!

Back in the car we rolled into East glacier exhausted. That drive took all day!! Hung out in our cabin a bit before walking across the street to Luna’s for dinner. I had a bison burger. The kids scarfed their food, too. Hungry! Then we played for the evening. There were kid playthings out back at Luna’s and a nice green space in front of our cabin. I sat on our little porch planning tomorrow while they messed around til dark. I’m excited to see more of this park tomorrow. It is incredible!! 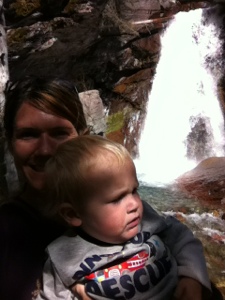 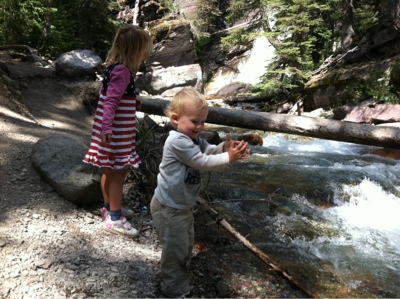 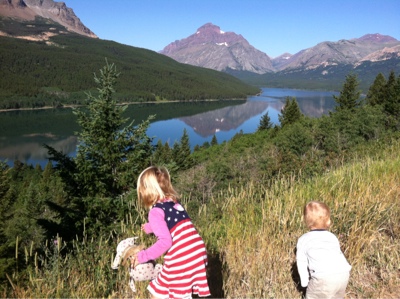 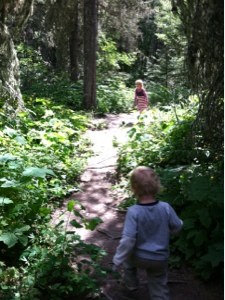 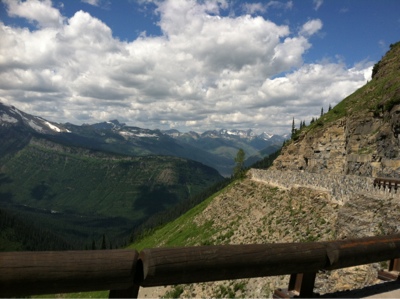 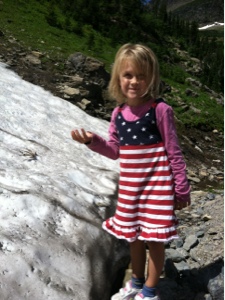 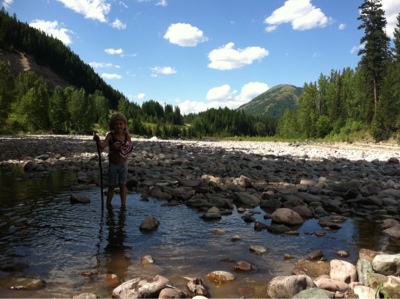 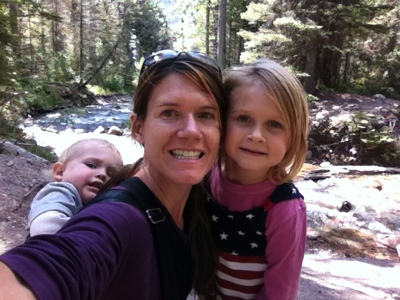 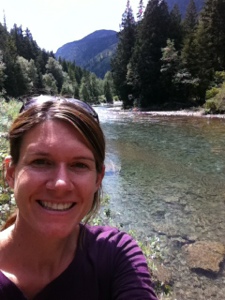 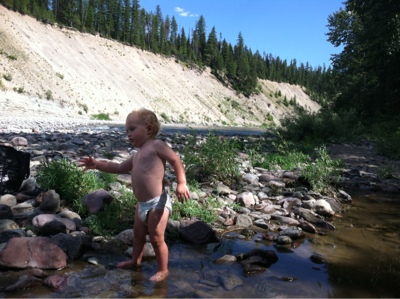 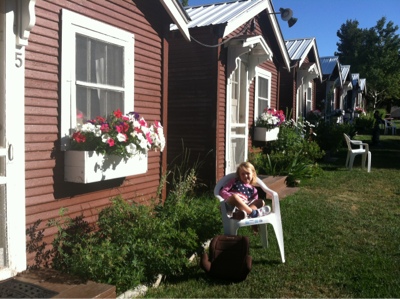 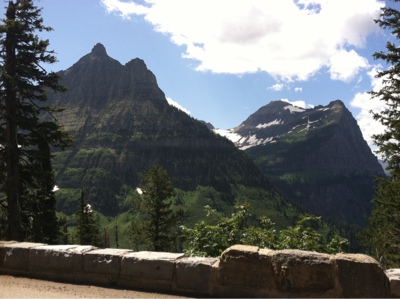