We made it to Seattle!!! The train rolled in this afternoon at 1:20pm… Only 2 1/2 hours late. Breakfast aboard was nice. We ate with a British couple who were interested to try my grits, which were “quite lovely” and yet told me the biscuits were really scones and a tea time food.  They were nice and pretty funny.  For the rest of the day we mostly napped or did some schoolwork and coloring. I am exhausted.  Didn’t sleep well last night.  We are on the top floor of the train and I could really feel it sway around the curves, which woke me up panicking the train was falling over.  I get wierd like that on tall busses too.

One highlight of our train day was getting to know our room attendant Tashi. He is from Tibet and was so excited to hear we had visited his country. He spoke concern about the Chinese digging in the sacred mountains too much. When he learned Avi’s middle name I think he decided they were soulmates… Calling him Tenzin all the time. He was also excited for me to know that Tenzin is a very popular Tibetan name especially because it’s the Dalai Lama’s name. He even brought us our lunch to go since the kids were sleeping and not hungry at 10 am when they announced it was now or never. Later as the ride was ending he brought each of the kids a special sparkling cider and chocolate. Tashi made the trip so nice and personal; quite different from other trains.

I grabbed our bags and loaded up the stroller off the train, got a cart and picked up our bags at the carousel.  Then, we took a taxi to our hotel near Sea-Tac.  I had planned on just taking the Link Light Rail, but with the extra box we acquired in Boston (since my suitcase was too heavy) I just don’t think I can handle it all.  Taxi driver was nice, and our hotel is super nice.  The Marriott Sea-Tac.  It has a super cool indoor atrium pool that we spent a long time in after resting in the room for a while.

In the evening we talked with Bryan on the phone and then walked out to find some dinner.  By this time I was feeling pretty yucky.  My belly was feeling odd since the train, and now I also felt so exhausted I figured it was just a bad nights sleep.  Well, there are absolutely no restaurants around here.  There are a ton of hotels, but no restaurants.  I guess everyone simply eats at their hotel or is here just to get on a flight the next morning.  Our choice was a 7-11 or going to the airport. So, we walked to the airport which is just down the hill.  I found the AMC counter where we will check in on Sunday morning for our flight and then noticed the USO sign, so we went there.  It’s a pretty nice USO with a family room with toys, showers, sleeping areas, books, computers, etc… Plus, food.  So the kids had a hotdog, string cheese, apple, and chips.  I looked at the tuna sandwhiches, but the wierd taste in my mouth said “don’t do it”  and I grabbed an apple.  We spent another hour or so playing in the family area and then walked back to the hotel.  I felt really gross now and actually puked before my belly settled.  Time for a good nights sleep. 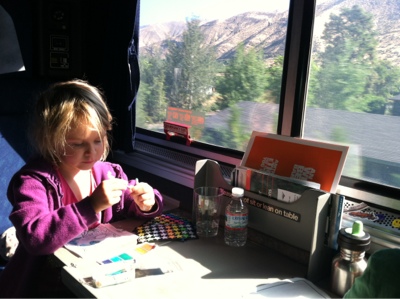 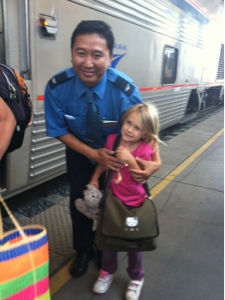 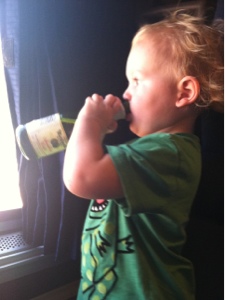 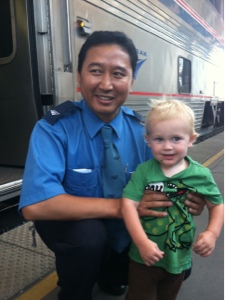 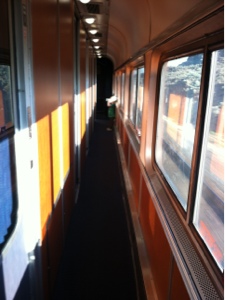 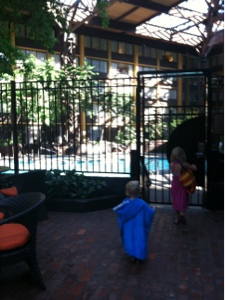 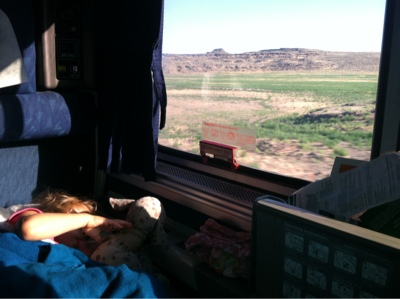 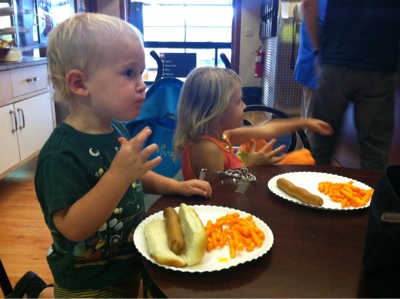 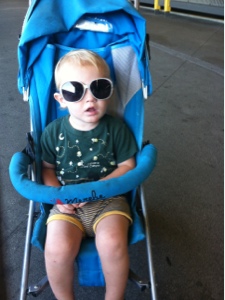