We finally got the chance to go to Everland.  I had visions of hopping up there and getting season passes the week we arrived, but we were just too jetlagged for that.  Then, the rain started.  Seems it’s been rainy almost every day except the ones when we have appointments or plans. Well, no plans today….time to go to Everland!   Then we woke and it was raining – sprinkling – and the weather websites here are not super detailed.  By lunch, when Bryan was heading to work the overcast-ness was pretty high up and I decided we would brave it even if it started raining again.  Well, good gamble as the sun even came out!

Everland is a great amusement park just under an hour north east of Songtan in a town called Yongin.  Its pretty sizeable.  Maybe Disneyland (in CA) size, and fun.  Zoe was super excited to go since she has seen pictures, but doesn’t actually remember going when we were here before.  Our first stop:  the Annual Pass Center.  I bought us 2 year membership passes because I figure we’ll be going a lot.  Actually our first ‘real’ stop on the way was on a wild goose chase to find an air machine for the tires since I got a ‘low tire pressure’ light turn on in the car…success.

Once in the park we wandered to the Aesop’s Village because its for kids.  Zoe is now tall enough to ride the 110cm stuff on her own, which is a big step.  The family coaster here wasn’t any too mild, and she needed to go alone since I had Avi who couldn’t ride.  She didn’t bat an eye at that and ran to get in line.  I went with her the first time, since I couldn’t see how long the line wound around.  She did great and followed the directions of the ride-guy, who let me step through the coaster and wait on the opposite platform.  It was awesome.  Zoe went twice and wanted to go more, but so did Avi so we moved on.  Found 2 other kid rides, but he was still too small.  I got a little frustrated with that since these were simple little rides – like the ‘teacups’ at disney and he was too short (not yet 90 cm).  A lady at an info booth helped me figure out which rides he could do, and we were off.  Aesop’s Village will be great for Zoe, but the little kiddo rides are more spread in the rest of the park.

Avi squealed and clapped and sang along with the “Global Village”.  It’s just like Its a Small World, but with a Korean twist – interesting for me to see how they view other countrys.  IE:  Germany=Beer, Kenya=tribal jungle hunters, and the USA = football, cheerleaders, and cowboys. Avi loved it.  From there we explored more of Magic Land where there were many kid rides for him, including Flash Pang Pang which Zoe loved as a baby.  He thought it was fun, but didn’t want to go a second time.  Instead he wanted to ride the cars-that-go-around-and-you-can-turn-the-steering-wheel ride 5 times.  Each time he pointed at a different vehicle to choose, but each time he selected the Buffalo Company tow truck. Zoe sat with him.

Zoe also did a few other rides on her own.  She ran through the “Castle of Oz” crazy house twice, and even went into a ride in a building that was like a simulator thing.  She loved it!  We all enjoyed the train around the European Adventure part of the park – it’s new to us and mostly gardens and restaurants and a spot for the big evening fireworks show.  The gardens were fun and whimsical with lots of smoky moist fog being pumped out to keep cool.  It did get a bit warm – I brought our raincoats but never used them.

In Zoo-topia we walked through bug-land, fed some parakeets, and visited the (non)petting zoo where the animals are behind short fences but a guy walks around preventing you from actually petting them. It’s bunnies, guinea pigs, ducks and chickens, too.  Let us pet them!   The long thing we waited for was the half-hour line to do the Safari.  It’s a ride on a big tiger-bus with huge windows past a ton of not-wild tigers and lions,  hyena’s, a liger!, and bears.  The bus pulls right up to the animals lounging on rocks or wandering around playing with each other.   It’s crazy!  The kids were so excited how close we were.  I got a little disturbed when the driver had the bears do some waving or standing up and tossed them treats.  Not sure about that, but then their treatment here is supposed to be very good so maybe they enjoy a treat and some pictures.  It wasn’t every bear and was impressive. hmm.  Both Zoe and Avi squealed with delight.

From there we rode the chair-lift up the hill.  The attendant usually hooks the stroller on the back, but had trouble with mine and so put it on it’s own chair.  Looked funny watching my stroller ride up the lift behind us.  Avi loved the chair lift!  He loved it so much he wanted to sit beside me but I wouldn’t let that happen.  It’s a real chairlift with not much but a bar holding you on.  After that it was getting late so we wandered toward the exit past the shops and the interesting under-water tree.  I visited the convenience store just outside the gate for some quick (late) heat up dinners.  Koreans have free hot water and microwaves just about everywhere.  So, I bought a rice bowl for the kids and a wierd hot-dog in a pretzel for myself.  A quick zap in the microwave and dinner was served.  Both kids promptly fell asleep in the car home.

I’m excited to go back again!  We barely visited a few sections of the park and didn’t watch any of the shows…lots more to explore.

Here are the Year pass prices.  We got a Standard – 2 year for Kat, Bryan, Zoe. Not sure what the Baby pass would be for.  He’s free.

Zoe on her coaster

It was a serious coaster!

This is the U.S. in the Global Village 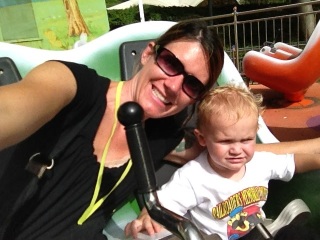 look he can ride this on his own! 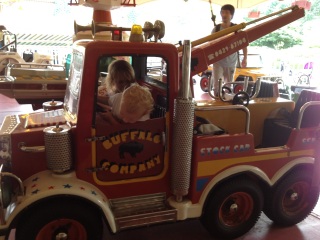 Zoe on her carousel horse 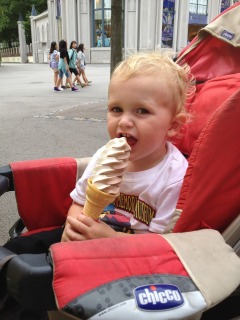 Zoe went to the stand and bought her own ice cream.

the misty garden.  That is Holland in the background. Everland is sort of obsessed with the Holland theme. 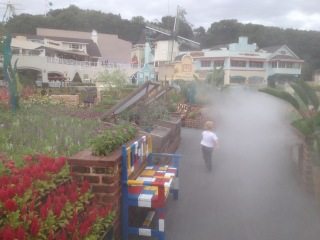 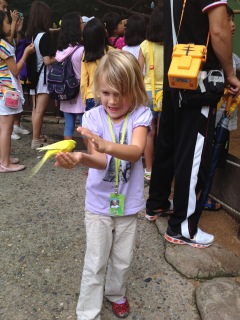 he kept trying to squeeze them.

only my kids were getting wet. why?

The Safari bus past the lions! 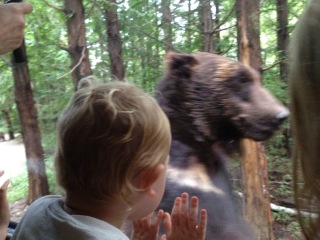 Saying goodnight to the aquatree on our way out.  These little handprints would sparkle and make noise when he pushed on them. 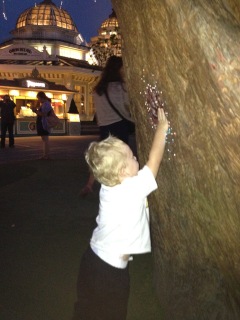