Today we went from freezing cold Korea to nice warm Thailand! We woke super early and loaded the kids in the car – they slept in their clothes last night on purpose. Because its so cold we drove to
the bus terminal to drop off the kids and I, then Bryan parked the car at home and jogged back. The terminal was cold but we bared it in our fleece and windbreakers. There was no way we were lugging winter coats to Thailand.

The bus ride was comfy and great. I love the reclining sleeper seats of the Limo bus. All of us except for Avi slept again; which really means I didn’t sleep as he was scrooching on my lap. At the airport we checked in, eased through security, and let the kids play in one of the playgrounds before our flight.

Thai Airways is nice! The flight attendants were great, the food was awesome, and the little TVs behind each seat had a huge selection. Zoe watched 3 movies. Avi wasn’t as interests in that. He watched a show and colored and kept busy with his airplane and camper before napping with me. We let each kid bring 2 small toys. Zoe selected her two new little ponies and Avi chose a matchbox airplane and campervan. 5 1/2 hours later we landed in Bangkok and relished the heat as we transferred outside to the domestic terminal. It was a bit of a rush to our Chiang Mai flight on Thai Smile. This flight was only an hour and twenty minutes which went quickly as they brought out some special Christmas treats like a wreath shaped Krispy Kreme donut and green and red fizzy drinks. It was fun, and so was finally landing in the mountains of northern Thailand!

At the airport we breezed out into the heat with our backpacks… No checked bags for us. There was my name on a paper- Bandito (really, thats his name) was there to take us and another family to Spicy Villa. The ride in a little van took a couple hours as we stopped to get snacks and food, and the last bit of road was dirt.

Our hut here at Spicy Villa is just that! A hut with open walls, bamboo floors, a mattress on the floor with mosquito netting and a basic bathroom. We are remote!

We got settled and went to the common area/ kitchen hut where dinner was being cooked over the fires. Yum!!!! Then, bedtime for sleepy kids (and exhausted parents).

Kids on the airplane 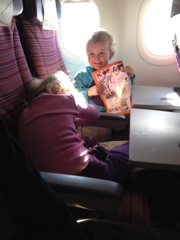 in the back of the van with Marta 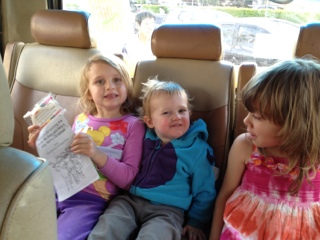 at a food market to pick up ingredients for dinner.  and toilet paper. 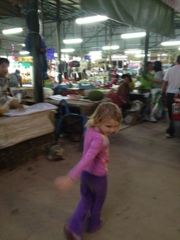 getting a banana pancake 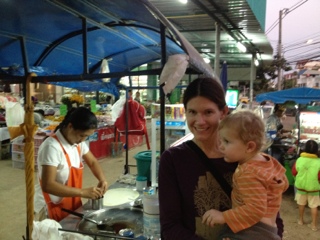 Zoe on our balcony