We woke with the sun again this morning, relaxed with some coffee before eating breakfast- delicious french toast.

From here we decided to attempt a long hike to a huge waterfall and native tribal village. We walked out the main road past Spicy Villa and continued past the fun swimming waterfall until the road became a trail along the river. Both kids enjoyed the hiking with few complaints as we kept passing amazing rapids, going through bamboo tunnels, and climbing over huge roots. We settled for a snack once and continued on.

Avi did get tired after about two hours so I put him in my kid carrier. Zoe was excited to lead – she really wanted to swim and did start complaining that it was too far and there were plenty of swimming holes along the way. Bryan carried her up over the ‘last’ hill as we decided to just stop at the next good spot. Well, the trail veered away from the river and started through some rice paddys! Bryan was worried we would be gone too long – we had arranged to do elephant riding around 3pm, but I encouraged and we continued around a corner to find an incredible site!!

The waterfall is huge!! There are also some villagers that have a few huts by it to sell drinks and snacks. One older guy picked up Zoe and carried her across a log bridge. She couldn’t believe it – there was a cave behind he waterfall!! Bryan and Zoe ran over to the cave for some exploring. Avi had fallen asleep on my back so I waded into the pool at the fall base and got a soda. When he woke we took him under the falls to find Zoe busy building up a sandcastle. She was in heaven! This cave was clearly the cave from the Simmy stories daddy used to tell her. Avi, on the other hand, was cold. I took him out and we basked in the sun eating some snacks and playing with a very social kitty that likes Nutella.

The water was a bit too cold to actually swim and our time was limited so we began heading back the way we came. I was a bit bummed we were on a time crunch. The village would’ve been neat – but we had elephants to ride. Zoe was even crying as we left … Because she wanted to take the cat!

The hike in to the waterfall had taken us 2 1/2 hours, but the hike out was a much quicker 55 minutes. I carried Avi on my back and Bryan rigged Zoe up on his chest – carrying her with the help of my huge white scarf Bethany gave me a few years ago! It was great and helped support her weight comfortably enough for him to carry her the whole way.

When we retuned we arranged to go to the elephant place where we could get a late lunch and swim a bit. Well, the food and swimming were just at some roadside stalls not near the elephants. And we really couldn’t swim but instead just wade. The kids had a good time of it. Zoe collected tadpoles and Avi threw in sticks. After that we were finally taken to the elephants and had a great time feeding one huge pregnant lady!! The trainers hitched up some seats high on the elephant backs and we rode them around the jungle. It was a bumpy and fairly uncomfortable ride up and down some steep hills, but neato just the same. They even waded through a deep river. The kids loved it; Bryan and I weren’t super impressed. Seemed very choreographed. I think that is the norm here. There are not really wild elephants to speak of anymore, and we couldn’t do a Mahout trainer class with the kiddos- which is also super pricy. I feel a bit bummed we rushed back from our amazing hike, but Zoe said it was so worth leaving the kitty… so it works out!! Avi also loved the elephants’ trunk – he wanted to feel it and watch it drink. Too funny.

Back at the villa we braved a semi-warm shower in our hut. Then we met up with the Belgian family and the kids played for the evening until dinner time. The food here is incredible! Fresh cooked Thai food for breakfast, lunch and dinner! Early to bed for us weary folks – though our lights didn’t work again tonight. Disappointed in that. Bryan enjoyed a much deserved massage as I got the kiddos to sleep.

getting some good hiking sticks 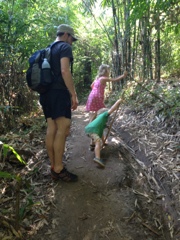 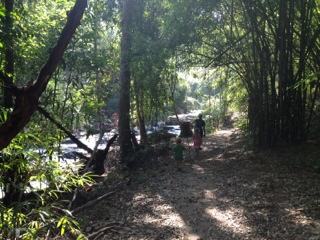 Bryan under the waterfall 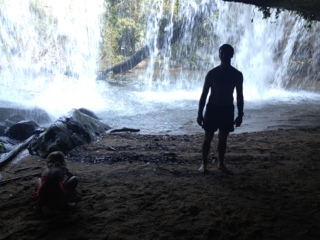 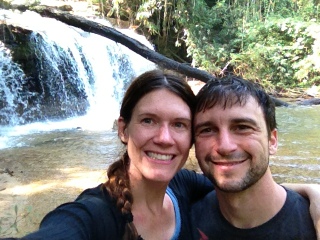 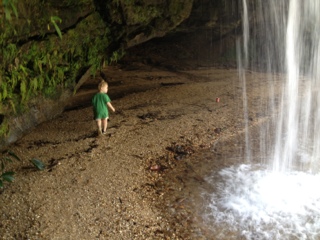 building sandcastles under the waterfall 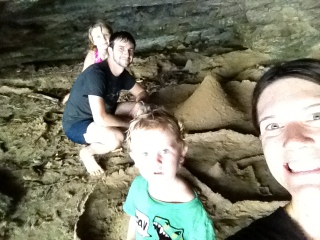 the fam ready to hike back 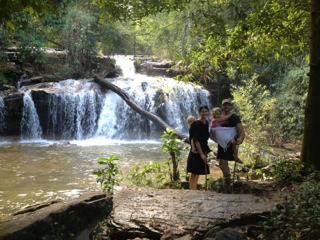 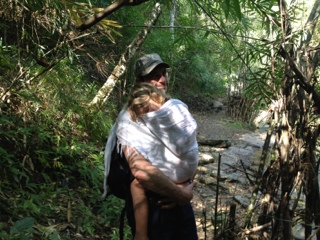 food at a table for once 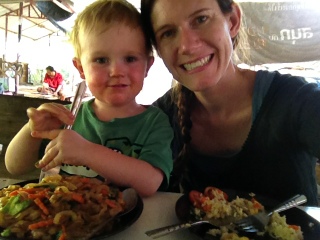 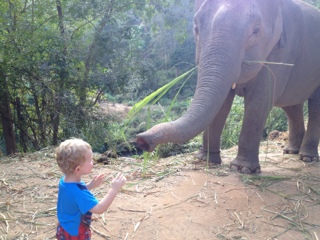 this was soooo cool 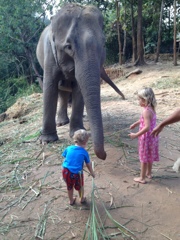 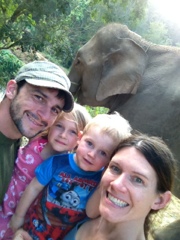 crossing over to ride our elephant 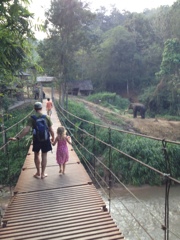 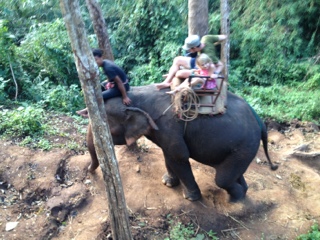 Kat and Avi riding our elephant in the river 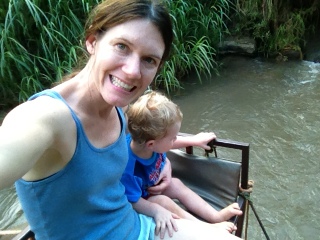 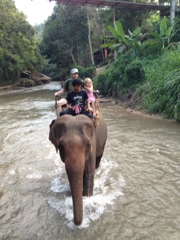 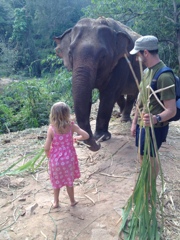