Avi was coughing last night so we didn’t get very good sleep. Oh well, the kids still woke with the sun and wanted to explore. Avi wet on a morning walk with Bryan down to a little creek to catch tadpoles. Zoe snuggled with me and then we joined everyone at the kitchen hut. It would be a while until breakfast so we had some bread and nutella.

From then the morning was occupied with playing in the garden, chasing the cats, and packing up. Bryan and I both decided to move up to the other Spicy villa property. They own a second little hut village much higher in the national park – Doi Inthanon – near a Karen tribal village. We were halfway to it when we hiked to the giant waterfall yesterday but we can just drive up today. It’s super funny too that the Belgan family decided the same thing! So, around noon the eight of us loaded into the back of a covered pickup truck and drove up a dirt road for 45 minutes high up into the wilderness.

This next set of huts is awesome. The view here is even more incredible. The forest is noticeably drier with less bamboo and giant trees- the mist doesn’t come up this far. We are also very close to an ethnic minority village – the Karen people- so all the helpers here are from that tribe. Another amazing home cooked lunch on a fire later and we were off on our first outing… Avi, by the way loves yellow curry chicken!

This time we paid a local guy from the village to drive us up to a waterfall and then show us the trailway back.  Since there are numerous villages and paddy fields in the woods around here (and no trail maps to speak of ) we really needed someone to show us the way. We parked near a small cluster of homes and walked across a few fields to the waterfall. It was shady and a bit cool at first, but my kids both just jumped right in. We played and splashed and even walked up on to of it! The other two Belgan kiddos joined in and had a wonderful time throwing sand around and building sand castles on all the rocks in the river below. Avi built his own space away from all the girls and had a blast playing with daddy. In fact Bryan took both the kids under the waterfall. Eventually we were chilly and ready for our hike back.

I’m so glad we had Dwat to guide us! For only $6 he led us past a maze of rice paddys, through the tall grass trails, and into his village on our way back. We got to stop and play some kickball with the local boys and then walked through the village. I had Avi in the kid carrier. He squealed at counting all the pigs.  The homes were wood or bamboo made, on stilts, and had living spaces below for cleaning and tying up the pig. Most were very open having walls up top but not below. Similar to the huts we are staying in but sturdier and obviously lived in. We stopped at Dwats house where we met his 6 year old son and 10 month old baby whom he strapped onto his chest and took with us the remainder of the way back to Spicy villa 2. Avi enjoyed all the attention he got from the village boys and mothers who brought baby’s to meet him. Zoe was less interested and even shied away from ladies who wanted to meet her.

Back at our hut dinner was being cooked as the sun set. There are a lot more guest up here- most are on a trekking tour and this is a stop for them. Dinner was incredible! 7 different Thai dishes plus rice and cuke salad. Zoe fell asleep on Bryan’s lap, Avi and I sat at the campfire before going to bed in our new hut. 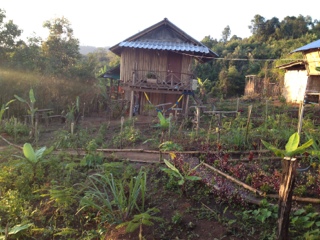 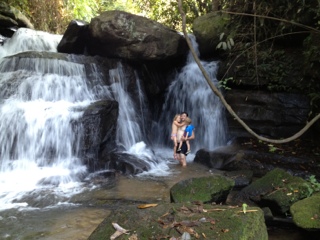 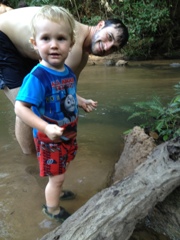 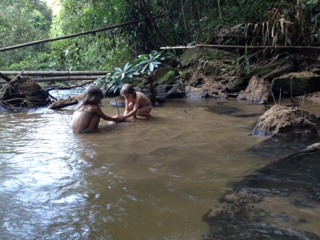 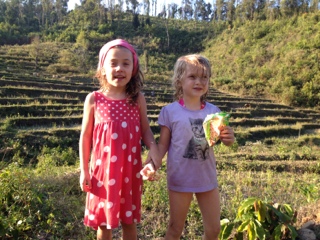 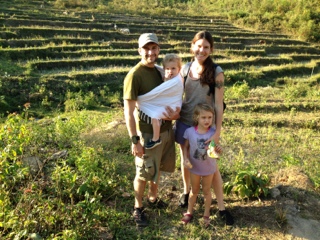 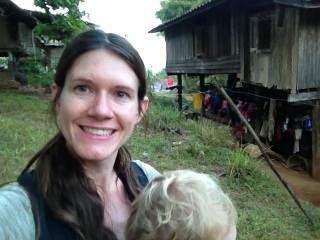 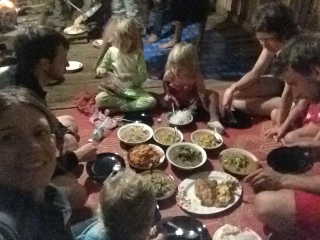 Avi enthralled by Dwat and his baby boy. 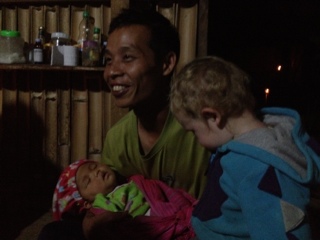