The sunrise this morning was gorgeous as it peaked up over the misty mountains below. We are well above the foggy zone here at the second spicy villa. The rest of the guests left mid morning after breakfast. I was antsy to do something but Bryan didn’t really want a plan and Zoe was playing with spicy the puppy. She can’t seem to be pulled away from the dog… Until everyone left and the dog went too.

We were left at the villa with a few of the villager workers. So I took Avi on a hike- my goal was to go back down to the big waterfall we saw two days ago, but we didn’t get far when Avi realized daddy wasn’t coming and screamed his head off. We returned and found Zoe eager and willing … So off we went again as a family once more.

The directions were simple. Follow the road to the right into the village, then go down the trail along the river to the waterfall. Well. The first part was fine and we enjoyed going through the village on our own. A whole family came to see us and were surprised we didn’t have a guide. Maybe we should have. From the village we continued down what we thought was the main trail, and then came to a split taking the one nearest the river. 20 minutes of bushwhacking later we turned around to find the main trail again. It led us all the way around the rim of the mountain, past some ladies chopping wood, and then dropped back down into the river valley – onto a very nice wide well-trodden trail. Hmmm. Upstream or downstream? Another couple wrong choices and we were back in track. Then the nice trail seemed to veer away from the river and a crappy path went toward it. I did not want to go down that steep trail only to lug the kids back up again, so Bryan went down to check it out.

Up until now the kids had been pretty good sports. Avi fell asleep on Bryan in the kid carrier and I had occasionally given Zoe piggy back rides – mostly up or backtracking. But now, they are grumpy and want snacks. Then Daddy came up and announced that we were here!!! They got up and ran down to the huge waterfall.

Our final afternoon in the mountains was spent enjoying the cool water, building sand castles in the cave, carving canyons, eating snacks, and playing with the local kitty. It was a blast. Zoe engineered a huge canal system leading the trickle of water in the cave out to the river. Avi threw rocks in until he found the perfect horsey stick which he rode the remainder of the time.

The hike back up to the village was dramatically shorter now that we knew the route; we figured out that our mistake was in the village.  We took the main trail to the right, thinking the route to the left went to a house… well, the reatl trail direct to the waterfall was the one to the left.  oops. Both kids hiked to the village and Zoe went the whole way back to our hut, singing 99 bottles of coke on the wall.

We returned to find our little hut village full again! A French family of 10 are on a trekking tour; we had seen them at the waterfall for a bit. Neat! They were a lively crowd to eat dinner with, and had a daughter Zoe’s age who also sucked her thumb. They were also super interested in the Christmas coloring book Bethany had made for the kiddos, and all wanted to see it. Apparently learning about the different St Nick customs around Europe is super interesting.

We hit the hay pretty early again with two super tired kids and two super sore parents. Tomorrow it’s down into the city!

working on homework out in the kitchen hut 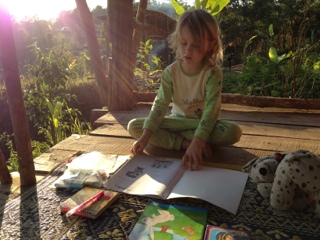 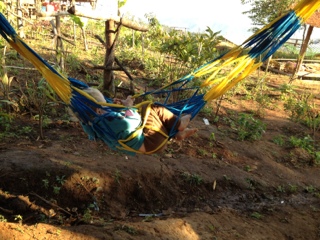 riding horsey at the waterfall 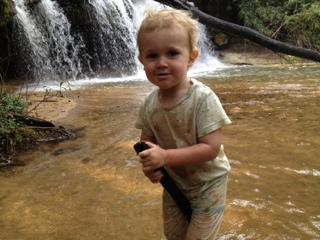 building a canal under the waterfall 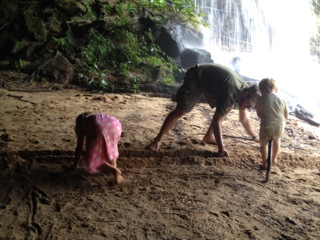 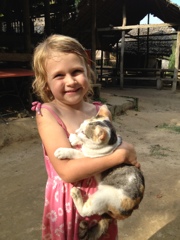 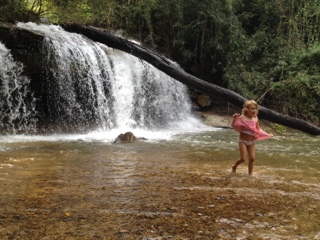 the kids held hands hiking back up to the village 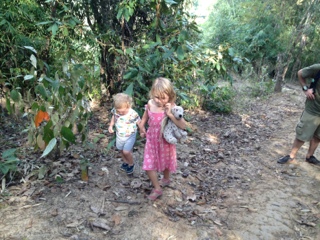