Today we walked around the sites here in the central part of Chiang Mai. We are staying in the old walled part of the city – a mile square surrounded by a still-filled water moat and a crumbling wall. It’s not super scenice; very “Asian city” looking with 2-3 story concrete buildings, lots of cable lines strung everywhere, and crumbling sidewalks. The things that make it interesting are the plants and vines growing everywhere – out of pots, hanging from roofs, breaking the street that make it shady and nice.  Exploring the maze of alleyways and brick lined roads also adds to it’s appeal.  It’s also the crazy scooters and bustling people and open wall shops that make it fun.

We began walking to the oldest Wat (temple) in the city. The kids enjoy taking their shoes off to go inside and see Buddha. Zoe and Avi even released some birds for good merit! They also love the temple grounds; inside the walled temple area are manicured gardens, and this one had a pond, plus a few gorgeous temple buildings. Thai temples are super ornate gold and red and white structures with Golden creatures and amazing colorful murals in and out. The second temple inside this complex was no disappointment. We spent a long time looking at the beautiful paintings of Buddhas life. Zoe wanted to know the whole story and Avi just wanted to find the dragons (naga serpents).

From there we wandered to the three kings statue in a big open square. After reading about how these three tribal leaders came together to form the Lanna (northern Thai) kingdom Zoe placed some flowers on the alter so their spirits would give her a blessing – like in the story. She has been having fun participating in traditions like that… And picking up all the beautiful tropical flowers that fall to the ground.

We toured the history museum to learn more about the Chiang Mai region where Avi liked all the info buttons to push and. Zoe liked the dioramas. From there we joined a crowd in a lunch shop and continued walking to the big Singh Wat, or the Lion Buddha temple. It’s a huge temple complex with multiple sanctuaries, lots of garden area, and a monk school. There were lots of orange-clad monks busy with decorating and preparing for something. We went in each sanctuary, around the huge white chedi, and even took a rest in the garden. An older monk joined us there to see the kids. He told us there was a special ceremony happening at 3pm… That why all the preparations. He played with Avi and moved on. Both kids also got a blessing from a monk in the lion-buddha temple.

It was now hot afternoon time and the kids were walked-out so we hailed a tuk-tuk to take us back to the hotel for a nap! Avi and I slept while Bryan and Zoe went on a search for bike rentals. These seem to be elusive – maybe because it’s high tourist season. Eventually Zoe was also tired so Bryan brought her back to nap as well. He then went on a quest for transportation… There are some sites a bit to far to walk so he tried to arrange a car rental, or a scooter, or a bicycle for any number of our remaining days and had trouble finding availability. Eventually he gave up – except that there is a place across the street which has been closed all day (it’s new years after all). When the kids finally woke we decided to take a tuk-tuk to the local night markets, and found the scooter place open! And with a scooter!! Woohoo!! Now we have a scoot to ride the next 2 days!

The markets were actually not as awesome as we expected but fun to wander around. I think the little vendors selling stuff on the street will be our best deal. I also can’t seem to find any fabric that isn’t already made into something. We enjoyed the cool night scooting around the city – all four of us crammed on! Avi stands in front of Bryan, Zoe and I sit behind. It’s fun to see all the lights and busy scooter traffic. We happened to go past the Singh Wat again which was open, so we stopped to go in and found a local music/dance school recital on an outdoor stage. All the monks were gathered at the back while locals sat on plastic chairs near the show. We found some seats and stayed a long time to watch. Both kids sat nicely to enjoy it. We have been so amazed at how much Avi likes musical performances. Zoe was bummed we needed to go, but Avi was falling asleep so its bedtime.

Tomorrow we will scoot out to the countryside! 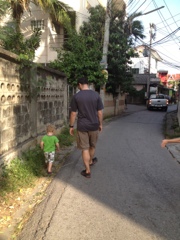 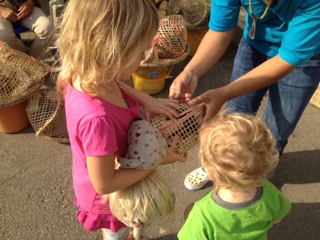 Avi loves these dragons on the stairways 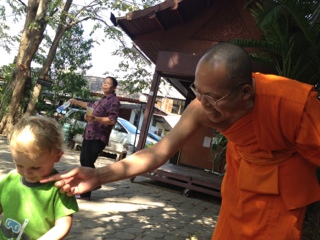 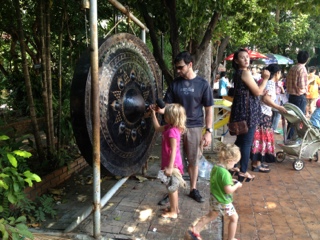 in the Singh temple 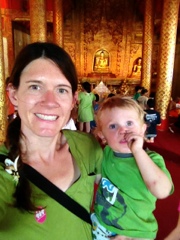 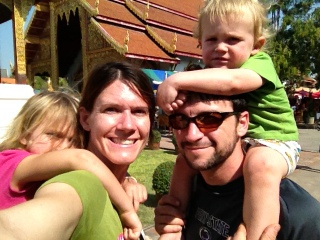 getting an apple at the market 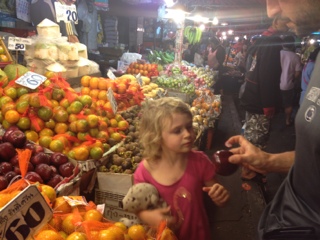 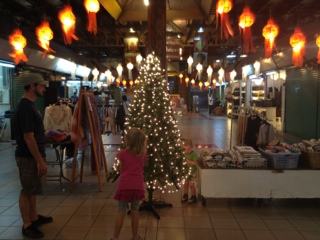 the temple at nighttime 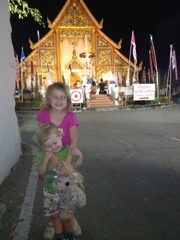