At breakfast this morning we ran into Tim, Ilsa, Marta, and Lucia: the Belgian family who stayed at Spicy Villa up in the mountains with us. We swapped stories and they thought it was funny we rented a single scooter for the whole fam.

We took the scooter for a loooooong drive today; followed the road east out of town to San Kampheang hot spring. The drive out was interesting as we passed through the rest of Chiang Mai, the fancy suburban housing developments, the dusty towns, and finally the rice paddys. Avi half sat half stood in front of Bryan the entire hour + long ride. Zoe sat behind Bryan and I sat behind her. It was fun to see all the unique stores – some hardware stores I wish we had in Korea! Then we enjoyed watching the distant mountains grow larger as we approached the hot springs. Amazingly we found it with a crappy tourist map and well- signed roads.

The hot springs was a neato Thai hangout. Most families arrive with coolers and mats ready to camp out for the day. We played at the playground, bought some snacks and lunch, and boiled some eggs! Yes the spring is hot enough to boil eggs !!! There was a raised pool where the hottest spring water – the kind spraying out of the adjacent geysers- was pumped just for egg boiling. Unfortunately ours came out a bit soft boiled, but it was still fun and the kids enjoyed playing with the handled grass basket our eggs came in.

In addition to boiling eggs, there is a long canal for feet soaking. The spring water flows into it and also into a shallow pool. The pool is for kids as its not as steamy as the canal. Both Avi and Zoe swam and swam in there until I was tired of making sure Avi didn’t get too deep. Only bribing them with a big fancy shaved ice could get them to get dressed to join us relaxing in the flower garden. Well, Bryan and I relaxed. The kids ran around chasing each other.

Eventually we found ourselves back on the scooter heading a few km up the road to the Muang On cave. This is not a very touristed site, and neither is the hot spring. It was, however, super cool and a hit with both kids. In fact Avi’s favorite part of today was seeing the snake statues and Zoe’s was seeing the little ceramic animals – both in the cave. It’s not just a cave but also a temple of sorts; a place where Buddha himself is said to have come past and a great hermit once lived. Very auspicious and hence every little nitch has a Buddha or a shrine or snake and animal figurines!

Not only is the cave a temple it’s also a paleontological work of art with a huge (unconfirmed) dino fossil that we got to walk under. Looks fairly convincing. Bryan and I were simply in awe at the sheer size of the cave. It’s really large and we simply paid admission to go in and explore on our own. The stairs are creepily steep and the lighting is low, but freely exploring is something that would never happen in the states so it was awesome to us!!

The scooter ride home didn’t feel as long. Both kids fell asleep… We could see this coming though so I bundled Avi on my belly facing backward (hugging). That left Zoe between Bryan and I where I could hold her and let her snooze in the crook of my arm. It was an enjoyable ride.

Back in town we stopped at the large Warorot market where I found some amazing fabric shops with great prices on silk for a project that is still forming. When we returned to the hotel the kids and Bryan watched some of the elusive TV while I got THE BEST MASSAGE EVER across the street for $5. Awana massage has a gal who is awesome – she is also super nice and really pretty and is incredible considering both her hands have only 2 usable but super strong fingers. ahhh. It was so good I insisted Bryan go over there this evening after dinner as I got the kids to bed. Dinner was interesting. Avi surprises us daily with the foods he is willing to try and like. Today he scarfed down nearly raw tofu, brown wild rice, and veggie spring rolls at Aum vegetarian restaurant. He turned his nose to the sweet banana pancakes, however. Not complaining! We walked around the local Wat for a bit after dinner so they could burn some energy. It was very pretty all lit up at nighttime; the gold trim shines and the gemstone inlays sparkle. It’s like magic. 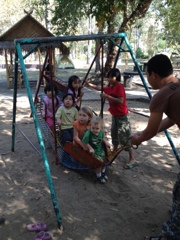 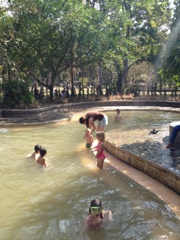 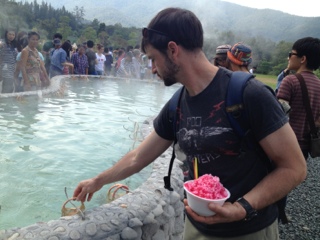 Kat and Avi at the geyser 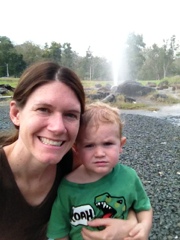 mmmmm – Thai shaved ice is awesome.  I think it’s the sweetend milk they dump on top. 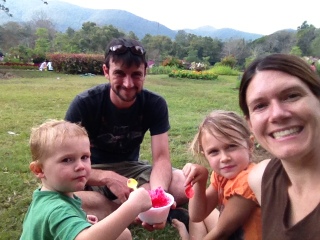 Zoe wanted pictures next to the flower garden 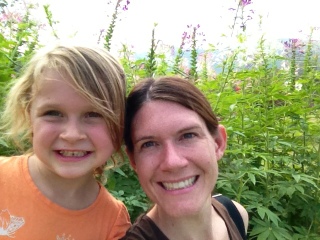 Avi finally got to ‘ride’ a naga dragon.  All the others have been at a temple so no riding allowed.  This was at the base of the stairs leading to Muang On cave. 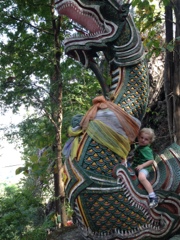 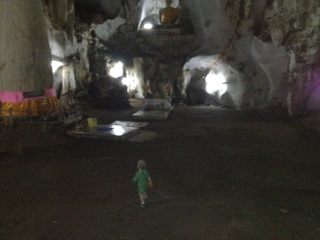 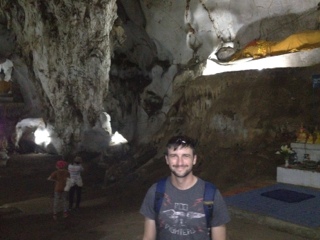 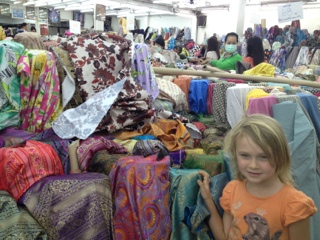 getting back on the scoot 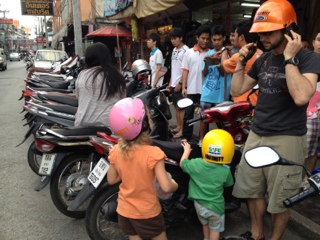