Breakfast in our hotel is so convenient – they have granola in yogurt for Avi and Bryan, Thai rice for me, and bacon for Zoe.

Also convenient: our scooter rental. Today we drove it to the Doi Suthep park base and then road a red bus up. These are called Songthaew’s and are basically a pickup truck with benches along the sides of the bed, a sturdy tall roof and open back door. People cram in or hang on the back and when there are about ten folks it will go.  You see all kinds of people use these: business men, villagers, and even school kids hanging off the back in their uniforms.  For $1 we rode up the mountain to see the Wat Suthep. That $1 paid for a pretty crazy fast ride up a windy hill; I think our driver was racing his buddy! The way down was not as crazy but instead Zoe and I felt sick.

Wat Suthep is the most touristed temple in Chiang Mai and it felt like it. There were lots of people – Thai’s and foreigners alike. The bus dropped us at the base of a huge naga-lined stairway. A naga is a huge dragon snake creature, and Avi loves to spot them at the temples. After a few pictures we slowly made our way up the temple stairs and into the Wat. Gold gold gold gilt all over everything!!! The sanctuary itself was quite small, but surrounded by a courtyard full of gold Buddhas, a huge glittering gold chedi, and even huge gold umbrellas! Outside of the temple courtyard were numerous gongs and bells that the kids liked ringing. There is also a gigantic balcony with a gigantic view of the city. Today it was pretty hazy though we were able to find the airport and make out the square shape of the moat and wall around the old city where we are staying.

One thing that was irritating at this Wat were the huge number of fairly pushy vendors. Lots and lots of people selling souvenirs and food and temple items. At most other temples there are temple items to buy – flowers for the alter, food donations for monks, incense, etc… But this was excessive and pushy. I get it though… it’s a major attraction versus a true local temple with regular worshippers. Still, a bit unholy and disrespectful in my mind.

The next Wat we visited was enjoyable for the completely opposite reason. Wat Umong is a forest Wat- a different more back-to-basics form of Buddhism. It was founded in the 1300s, abandoned at some point, and reestablished so it was an interesting blend of ancient ruin and working temple. The temple was beautiful and simple wood, but still with the ornate Thai style with three multiple carved wood rooflines. There was also a fun series of tunnels under the huge basic brick chedi. Zoe exploreds with us and found all the Buddhas and niches super fun. She also spent a long time circling the chedi on her own while I sat with Avi who was just waking up after falling asleep on me in the sling. He woke to see a big rooster jump upon the wall in front of us and crow. We sat still and he squealed and laughed a how cool it was. From there he chased more chickens around the forested grounds. This Wat has a lot of land and is tucked up inside the forest at the base of the mountain. It truly didn’t feel like we were in the city. There was also a big lake full of fish. We bought some bread for fish food to feed them and the birds. Both kids enjoyed this – Avi’s tactic is to scare the birds and throw food with all his might. Zoe, on the other hand, was gentle and got a big cluster of birds to surround her.

After such a peaceful place we ventured back out into the crazy city on our scooter to try and find an old town of ruins just out of town. We followed directions and turned around twice before giving up.  Both kids were grumpy of being on out so we stopped at a gas station for a break and a treat before scooting back to the old part of the city – near our hotel – to go to a big playground and park. This was a hit! The playground had crazy old 1980s metal playthings and especially a cool train swing Avi liked. Zoe played and then spent a long time collecting fallen flowers to press. A perfect end to a great day!

A night we found a fun restaurant with a rooftop seating area to watch the cars go by the moat. Back in the room Zoe did her workbooks while Avi colored. Later, after they had showered, they were running and playing airplanes when Avi slipped on the slick floor. He banged his head on the corner of the chest! It was a bad dent, but no blood. After some ice and arnica he seemed back to normal. Poor guy has gotten quite the scratched up on his legs and a blister on his foot. Zoe isn’t much better with skinned knees – she seems to also be falling over more than normal here. Uneven walkways? Gawking? Who knows. They are both still having a wonderful time! 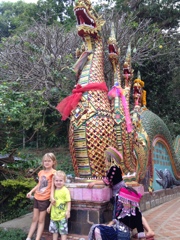 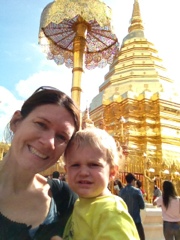 Zoe and the flower offerings altar at wat du suthep 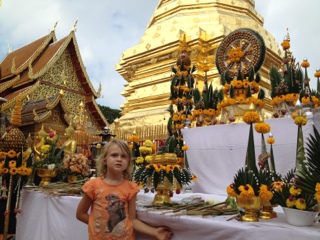 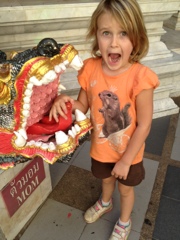 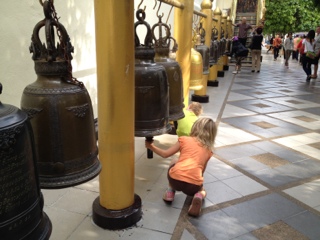 The tunnels at forest wat UMong 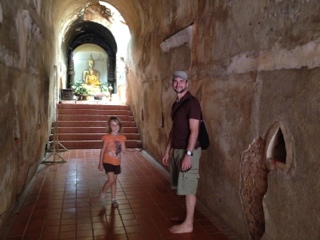 the basic chedi at wat u mong 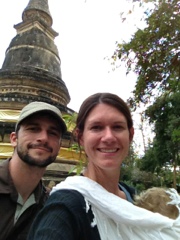 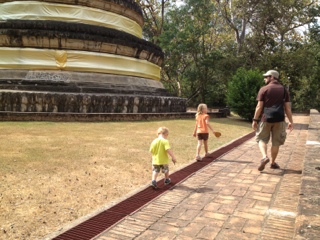 feeding the birds and fish 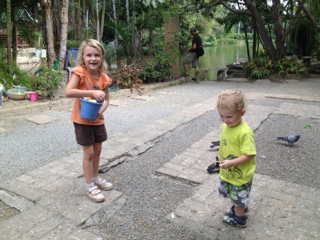 Avi and his train swing 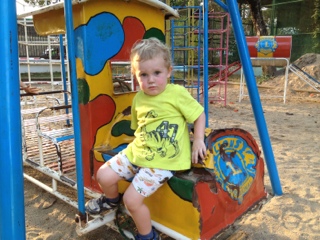 walking back down our alleyway to the Awana House hotel. 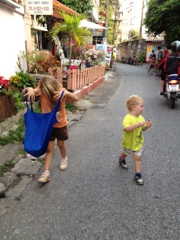