Not even two years ago I found myself taking a wild taxi ride to the ER in Istanbul. Avi was the patient that time; here in Chiang Mai Zoe needed the ambulance ride.

For the afternoon we rented bicycles to pedal down to a village suburb called Wiang Kum Kam; there are lots of ancient ruins and temple sites to bike around and explore. We tried to find it the other day on the scooter but needed more info. Now, armed with a better (but still crappy) map we only needed directions a couple times before finding the first ruin. It was a big old crumbling temple… perfect for the kids to run around on and burn some energy. There was also a great shady spot for Bryan and I to sit and take a break from the bikes. Zoe ran around, balanced in the edge of old 5 foot high walls, played hide and seek with Avi and jumped off ledges. Then…. It was time to move on. We biked passed a few more super crumbly ruins before coming to another sizable one worth stopping for.

This was a maze of old walls surrounded by a moat – more like a 6 foot long bank angling down into an old brick lined gutter. The bank was made of bricks with grass growing through them. While Bryan and I took a quick break for a drink under the pavilion Zoe went down the bank just under our feet. Her foot got caught and she went head over heals – her forehead and face hitting the bricks on the opposite side of the gutter. Bryan sprang into action and leaped down the 6 feet to pick her up. It was bad. Lots if screaming. Lots of blood. I got him some wipes and he put pressure on her gushing forehead. Lucky for us some local people were on a horse carrige ride and saw it. The driver raidioed for help and more villagers came out with med kits. Zoe was screaming and bleeding laying on Bryan’s lap as he kept pressure on her forehead.  Avi was scared, looked pale and sat by Zoe. The ambulance arrived super fast and Bryan carried Zoe into the back with the medic. One of the carriage riders translated for us.  As I grabbed our bags she pushed me and Avi into the front yelling that our bikes would be in the house on the corner.

The ambulance rushed us to Rajavej hospital. In the ER she was seen right away in a large room with many beds. Very kind nurses began to clean her up and tried to calm her. The bleeding had stopped  and a penny size gauge appeared along with big scratches and bruising around her eye which was swelling a bit.  They gave her an ice pack which she said felt better though she was still in sobbing pain. Bryan was ushered away to fill out her info at the check-in desk. The doctor saw her and decided not to stitch it because the cut is up into her hairline, so they steri stripped it shut and bandaged it up.  Eventually Zoe calmed down and wanted to see herself.  It was obvious that she was still in pain, even just pressing the bandages on hurt enough to get a squeal.  The nurses were so funny trying to figure the best way to work around her hair and still keep her cute. They came up with a gauze bow to tape over top of the bandage. The doctor was concerned about concussion and asked lots of questions and kept her for observation for a bit until deciding she didn’t show any signs. He got us a script for painkiller and an antibiotic and let us go with a list of signs to watch for and orders for Zoe to take it easy for the next few days. Whew. At some point I looked at Avi in my arms and realized he was still holding the empty can of fanta he and Zoe had just shared, and had no pants…they were drying on my bike handlebars from a (rare, actually) accident.  Poor guy was in shock I think. The nurses made him a blow up ‘happy hand’ out of a hospital glove.  It’s cute and Zoe was calmed enough to notice and want one too.

The big shock, though, came when we got the bill – Bryan had already discussed with our translator that this hospital wasn’t in the Tricare network, so we knew we would need to pay and submit for reimbursement. Not looking forward to that we saw the cashier and paid our 636 baht bill!! That is $20.89!!!!  Incredible!   If only our country would socialize medicine as well… makes us angry at the huge unnecessary overcharging in the States.

We took a tuk tuk back to the bikes. The local lady had them as she said and the accident site had been cleaned up. Thai people are so kind! We were able to tie one bike to the tuk tuk so I took two exhausted kids back to the hotel while Bryan pedaled the second bike. We had checked out of the hotel around lunchtime after spending the morning packing. So, both kids laid out on the lanai in the front common area. It was a nice spot to spend the rest of our afternoon. Avi slept. Zoe got some food and then napped, Bryan and I ate and returned our bikes. In the evening we took a final tuk tuk ride to the airport. Our flight to Bangkok departs at 2050 and our flight to Seoul leaves Bangkok at 2330, so tomorrow morning we will roll into freezing cold Korea to catch a bus home. Makes me tired already. Zoe is doing well with her meds and bandage bow.

Checking out our rental bikes 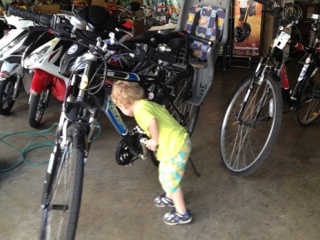 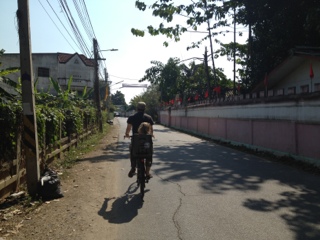 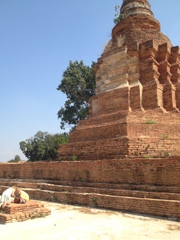 Avi safely playing on the ruins 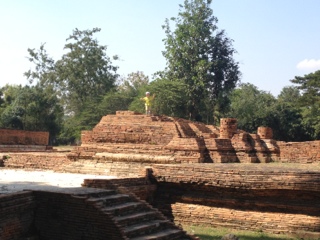 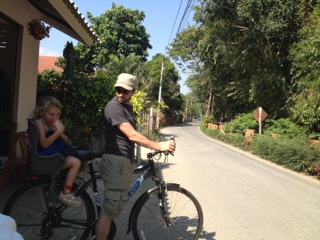 Zoe at the hospital with her bandage bow. 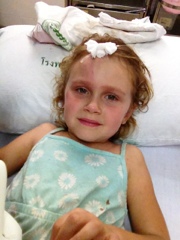 Tuk Tuk home – Bryan is biking behind us. 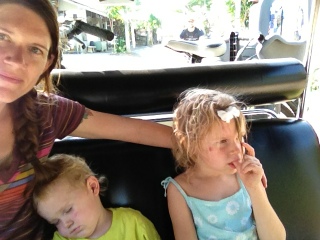 sleeping kids.  Zoe has her happy hand from the hospital 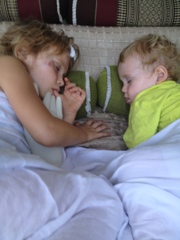 On our way to the airport.  both those happy hands made it to Korea. 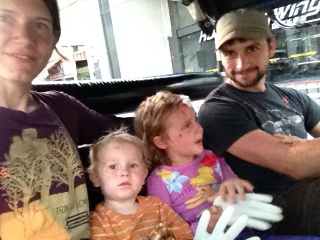