I haven’t been excited about a new place in while, but we made a new find this weekend that is fun for all!! In fact Avi is still looking at the brochure from the museum we visited raving how, “that big dinosaur…that bones…that dinosaur rex… that tops.”. And since it is a 3 day weekend we have been able to enjoy some time away from the base.

Saturday we loaded up the car early and drove south. The freeways were clear so we made good time getting to a much less populated part of Korea – the state of Gyeongsangnamdo and the town of Sacheon. The kids slept most of the way until we reached Sacheon and stopped at a very fancy McDonald’s for lunch.

Our first stop was the Munsa-am temple high atop the huge mountains…we wanted to get the lay of land here where the mountains drop down into the sea. The kids raved at the huge gold Buddha we could see sitting on the top of the hill as we drove up. At the Buddha was an awesome view down the mountain and out into the sea. Not sure what sea – East or West since we are looking south and pretty central on the peninsula. Anyway, Avi loved looking for boats while Zoe enjoyed pining over the temple murals. Up the mountains a tad further was another affiliated temple perched on a cliff overlooking the giant gold Buddha. As we walked up Bryan and I were each handed a clay roof tile to lug up the steps to the temple. I guess they are rebuilding and using the free manpower. Both Avi and Zoe searched for rocks and had fun placing them atop the small stacks lining the route up up up to the temple. The view was incredible!!! The south part of Korea is very mountainous and drops down into the sea as hundreds of islands. On a map it kind of looks as though the land is crumbling off into the ocean. Awesome!

We retuned to another section of Sacheon for the evening, and found a great cheapie motel near the Home Plus department store where we were planning to drop the kids in the playland and get dinner in the food court. Well they had neither!! At least there was a small play area, but we had to watch them ourselves.  I guess we are getting really spoiled with the babysitting service at our local stores.  We made do with cup of noodles that we heated at the motel; thank goodness hot water is a staple in Asia! And thank goodness our room had a gaudy Parisian theme and a mirrored headboard over the round bed: The kids thought it was super fancy!!

This morning we drove along the coast to the highlight of our trip: the Goseong Dinosaur Museum and the adjacent Sangjogam park. I can’t begin to tell you how excited the kids got as we approached…. First realize that we are in a very rural part of Korea, however, the kids are cheering as each of the lampposts we pass has a dinosaur on it. A cutesy cartoon Dino. Then up over the hill we go and see the huge museum looming over the cliffs looking very artistic and Dino-like itself. The excitement was palpable. Then we pulled up and there were only 2 cars! I was worried it was closed, but I guess this just isn’t a huge attraction this time of year. Good for us! … and wierd ….. we are so used to everything in Korea being a crowded affair.

The museum was only $3 per adult and $1.50 per kid!! And it was great. The central hall had some huge instant-gratification skeletons of brachiosaurus and T-rex and pteranodon. The lower floor had a big Dino mouth to walk though into a reenactment area that actually scared Avi because the Dino’s roared. There were also lots of fun interactive touch screens and buttons – in Korean but very graphics focused so we learned a lot. The second floor had the biggies: fossils skeletons and Dino info plus a big display on Dino trackways (this is the local claim to fame) Zoe was absorbed in the displays but Avi was rambunctious and kept running around until he found out there was a movie!

The 3D movie was super cheesy and not informative – just a crazy story about all the Dino’s at the park coming alive. Shockingly, both kids kept the 3D glasses on the whole time. Avi got scared again at a brief point when the T-rex was lunging to eat us. He got over it quickly since a Pteranadon boarded a Navy vessel and shot a missile at the cliff above the T-rex.  Problem solved.

After some more museum time we went outside to check out the grounds. Much to our surprise there was a huge series of dino themed playgrounds and statues and other fun stuff winding along the top of a cliff. It was a bit chilly but not too bad- no kid complaints. I think we ended up spending just as long out in the play area as we did at the museum! They loved it. Zoe especially had fun at the maze while Avi didn’t want to leave one particular Allosaurus slide.

As the fun continued we left the museum grounds to walk down a wooden pathway over the cliff to the rocky seaside. It was awesome!! Real Dino footprints fossilized in the stones that drop into the sea!!! Plus there were some super cool cracks-turned-sea caves in the cliff wall. This whole area is littered with awesome cliffs falling into the sea and places to seek out Dino fossil trackways! We spent a long time exploring and collecting shells as we made our way around the tip of the land and back up the hill to the car. The best part of the return trip was the slide down the hill to the parking lot… Guess they figured it would be more fun!!

Both kids were exhausted, cold, and wet so they fell asleep quickly in the car. Bryan and I took the chance to drive and explore the area and stop by another lessor visited Dino trackway before heading back to the Sangjogam park around the headland from the museum. From here Zoe and I explored the waters edge and found huge numbers of trackway fossils! There were tons. Everything from big round sauropod feet to three toed theropod impressions. Zoe was having a blast figuring out what these Dino’s were doing. She didn’t even notice that the weather had turned a bit sour and we were inundated with a constant misty rain. Time for some warmth!!

We found a great room at THE hotel in the area.. Checked in, got some dinner, got warm and then went out again. There is an awesome boardwalk system around the whole waterfront that we continued on up over the cliffs past our little village. Avi loved it!! Somehow hiking on a boardwalk is cooler than hiking on a trail. Well the rain picked up so we returned to our hotel room as it got dark.

There is so much more to do here that we are looking forward to another trip for more camping, hiking, new Dino trackways, beach time, and even rock climbing!!  We will be back! Zoe and Buddha – sea in the background 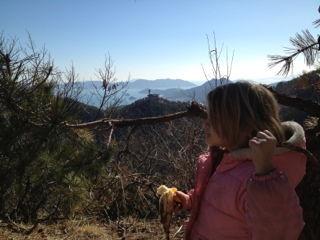 taking in the view of the sea, the islands, and that tiny nubbin on the mt. behind her is the giant buddha. 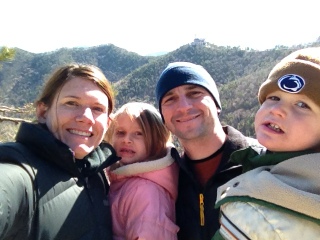 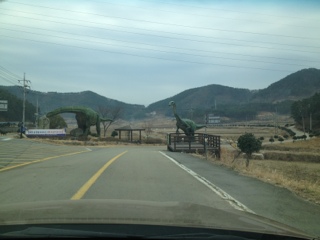 dinosaur land!  They are everywhere – in random places all over the Goseong-gun (Goseong county) 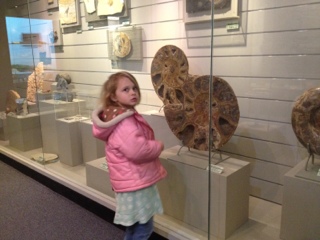 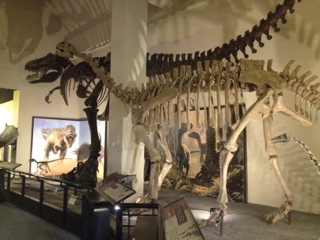 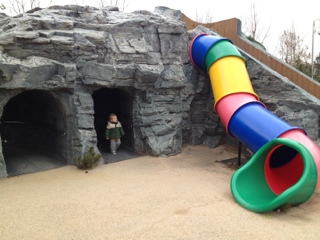 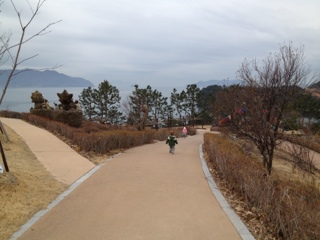 the dino museum outdoor area on a cliff over the sea 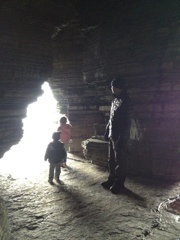 this is a REAL sea cave 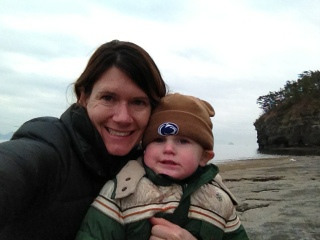 Kat and Avi at the trackway 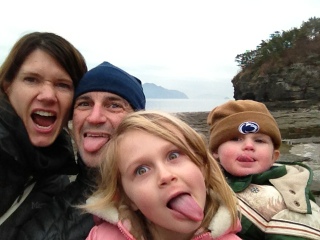 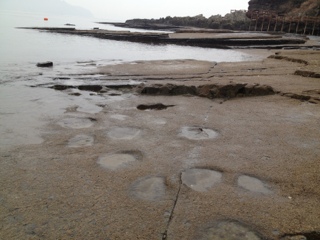 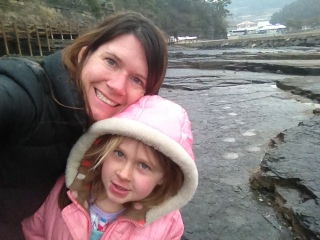 Kat and Zoe at one of the many trackways. 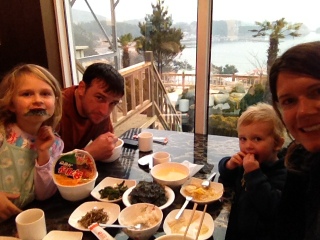 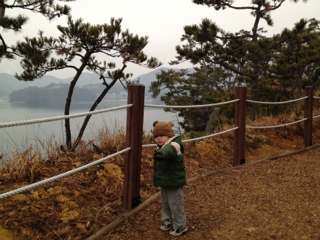