Zoe is the most excellent traveller. She doesn’t care if she is sleeping on a plane or a bus or a bed, and she seems to love the adventure of it all. Avi isn’t there just yet. He has fun seeing new things but when he is sleepy he gets grumpy and asks to go home. So went our night… Though it started with some other chaos.

We were walking along to the bus terminal when I got this itching feeling I forgot to lock the car. I had run out last minute to grab a tape measure ( so i could fit my bridesmaid dress in July), which Zoe had taken in the car to the base this morning. Well I knew if we went back we would miss the 1415 bus to the airport, but I was really worried so we went back home. Good thing too, because I was unlocked. I was frantic and bummed we missed the bus as we were going early to enjoy all the fun at Incheon airport. Oh well. I called a cab and we go the next bus at 1505.

At the airport, check in went great. Then I had to have a talk with Avi because he was getting runny – scampering a bit too far. From then on Zoe took it upon herself to guide him through security. I really wish i could take pictures there because she held his hand the whole time we waited in line and then told him what to do at the X-ray machine and walk through the metal detector. Awesome! She is such a helper. We ended up with enough time to play in one of the playgrounds, but had to just grab some fast food. Avi just loves wing at the airport watching the planes and the vehicles bustling about down below. It’s so exciting to travel with him and see all that from his perspective!

Our flight was on Jeju Airlines departing at 1930. This is a low cost Korean line but was run very smoothly. At check in the lady noticed I chose the 3 back seats and was concerned because they don’t recline. So she switched us to row 2. I thought that was nice until we boarded and discovered its the front row – along the bulkhead wall. Yuck!!! That is the worst seat for people with kids because there is nowhere to put a bag and the armrests don’t go up. We dealt with it for a couple hours – Zoe wrote in her journal, Avi colored his book and put stickers on the wall, we had a snack-ish meal served, but when they got sleepy it was obvious this would be miserable. Usually I put up the armrests so Zoe can use my lap as a pillow and Avi can lay on me while I lean on the window. This can’t be done in the front row, and Avi was getting mad about it. Zoe was even frustrated trying to curl up in a ball on her seat. I asked the attendant if there was another row open, but the flight was full. So, I asked the guys behind us if they would switch. A different flight attendant helped and the guys agreed – 2 were really nice about it and seemed thrilled with the extra leg room. The other guy was willing but a bit put out that he had to pause Lord of the Rings on his iPad. I thanked them profusely and we all got a few hours of slightly comfortable sleep. We woke to a special surprise: balloon animals! Jeju air gives them to the kids. Too cute.

Bangkok airport is gigantic. We got off the plane and followed signs that baggage claim was 400 m away! Thank goodness there are plenty of free trolleys to push the kids on. Customs was packed and we were mercifully led I the “old people and infants” line. Still took about a half hour before we got stamped and wandered into baggage claim. Luckily our stroller and backpack were first, so we booked past “nothing to declare” and out to the taxi stand.

I prebooked a small hotel called Nantra near the Ekamai bus terminal. By now it was almost 1am but we still hit traffic in town. Avi loved the first 20 minutes in the taxi and then got sleepy and wanted “Avi’s bed”. He gets funny on trips when he is overtired and wants to be home. Don’t we all sometimes, I guess. The hotel is nice – and we are tired. Avi cried some until Zoe explained that we will get to go to the beach and spouted off all the wonderful things about beaches. I love her. She has been able to sense when my frustration with Avi is high – sometimes he simply will not listen and goes on down the dark NO path. She can (sometimes) step in and say exactly what I’m saying but he will listen! Tonight she worked her magic.

Tomorrow we will sleep in a bit, get breakfast downstairs and walk a block to the bus terminal bound for Ko Samet. 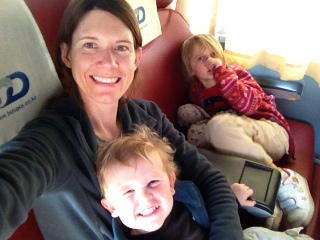 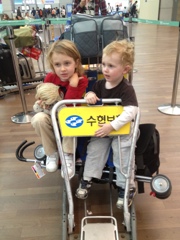 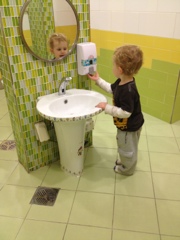 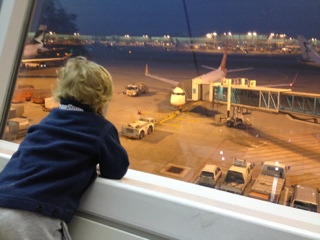 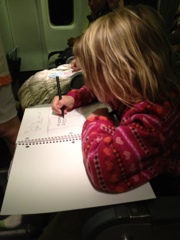 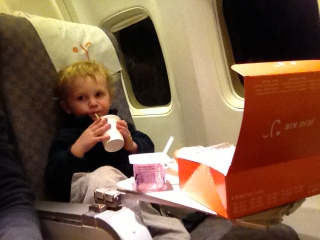 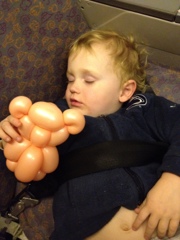