We enjoyed some banana pancakes for breakfast at our guesthouse this morning. The grandma that lives here can’t get enough of watching Avi. She found it fascinating to watch him eat.

From there we walked out to the main road and caught a tuk-tuk to the former Palace that is now a museum. It was neat to see the not-super-ornate rooms and furnishings. Except the throne room- it was covered in mirror mosaics and gold leaf. There were also tons of relics saved from ancient temples around Laos from their historical time prior to French colonial rule and the more recent destruction from wars. The most amazing was the Prabang Buddha – supposedly made in the 1st century in Sri Lanka. It was amazing to see. Zoe was fascinated by it and all the treasures gifted to the king of Lao from other countries. I had to hold Avi most of the time as he was being naughty and touching stuff. Sadly, no pictures allowed. Bummer.

I picked up a few baguette sandwiches and we retuned to our guesthouse to get changed and await transpo to the Kuang Si waterfall. It came in the form Of a super packed mini van. Luckily we were the last pickup and got To sit up front. The ride was full of silent Europeans and then my loud kids.

The waterfall is in a national park and back a short trail past a bear refuge that was empty. It’s also not just one but a series of stepped waterfalls and pools … Many ideal for swimming. The kids were so excited they almost leapt Into the first pool until they figured out it was freezing cold. We explored up the trail a bit until we found a less crowded pool with a shallow gradual entry. Kiddos donned their life vests and braved the chill…. It wasn’t too bad once we were in. There were even Fish to feed and Zoe spent most of her time trying to catch one. Avi, however, wasn’t satisfied with the shallow area and dragged me to the small waterfalls where the young backpacker crowd was jumping in. This is what he wanted to do! So we balanced along the edge of the falls to a shorter one and he jumped in at me. He also realized it was just as cold and to deep for mommy to touch! So that made him nervous and we go out. Zoe came over too but just sat on the edge.

Eventually we tires of swimming and continued on the trail up hill to see even more waterfalls and then the BIG one showed up!! I knew there was one large waterfall but this was enormous. The kids were so excited they ran at it. We I’d get some good pictures. It’s huge!! Then we walked across a bridge at the base to see up the mountain and the waterfalls above the big one! It was awesome.

Zoe led us back down half of the hill singing, and then Avi took over as “engine” and sang his engine song while Zoe sang a coal car song filling up the engine. It was cute. We changed into dry clothes and wandered back to the bear refuge to find it full of sun bears!! Avi especially liked watching them climb all over their jungle gym.

Both kids fell asleep in the van back to our guesthouse, but until serenading the whole vehicle of stoic Europeans with a rousing rendition of Bingo, Old Macdonald, and the ABCs. Loudly. When Avi woke in his bed we realized he was missing his little orange airplane. Both kid were allowed 2 small toys on the trip, so he brought his orange prop airplane and a digger. Zoe brought a pony and little rabbit. Well, his airplane is no where to be found. I know for sure he had it walking out of the waterfall. I think he dropped it when he and Zoe were being spazzes and getting into a cooler for a Fanta. He carried the fanta to the van, and I didn’t notice he no longer had his plane. He has plenty at home. That one was a favorite though. He is surprisingly nonchalant about it.

Zoe couldn’t get back to sleep at the guesthouse so she worked on schoolwork until Avi woke and we walked into town. We were looking for a playground and I thought the school around the corner may have one, but it turns out to be a monk school. No playground.

There is a big hill in town called Phousi Hill and we made our way to he back route up the hill. It’s a bunch of stairs winding their way past the different buddha images to a stupa on top and a great view. Both kids wee motivated to go up this and we for halfway very quickly. Then, Avi found a giant seed pod and wanted to dig in the dirt at every step. Zoe was quite patient and probably doubled her steps by going up and coming back for us so many times. She even said Annyong to the big group of Korean monks we passed on their way down. Funny to see Korean monks out touring; they found it humorous when I said we were from Pyeongtak. The kids were in good spirits, though, and happy to get to the top to see the sun set – well more just get darker. There is a pretty good haze layer here. Not sure if it’s a seasonal thing or just our bad timing, but the pretty mountains are fairly blurry. The view was sill great and fun to see the city lights turn on. Zoe was in such a good mood she did pictures with about 5 different people that asked and sang happy birthday to Avi about 3 times while dancing. Pretty sure every Lao teen up there has it on their phone.

On the way down the gaggles of local young teens hanging out joined us. The girls were fascinated with Zoe and played with her hair, held her hand, and showed her how to slide down the wide white cement banisters like sliding boards. I think she enjoyed being the center of attention as usually Avi gets that treatment anymore. Avi did get a short piggy back ride from one of he boys, but they tired of kid-time quickly and hurried down. After many goodbye pictures and giggles at the bottom of the hill Zoe’s new admirers went their own way, and we went to find dinner.

Since we went up the backside and down the main path we were smack dab in the middle of the night market so we waded through all the wares – I bought a bag – and out to the street for a real restaurant meal. We have eaten from street vendors thus far and I was ready for a sit down. I got a pizza “to be safe” and Avi mostly ate that while Zoe and I shared some delicious chicken and mint and rice Lao dish. Avi also liked the chicken.

The walk back to our guesthouse was quick. We found our little orange and white market kitten from last night again, and stopped to pet it. Feels a bit like we’ve moved in when we start recognizing the local pets. After that Zoe decided she wanted the ‘jog’ and Avi ran along pushing the stroller. It’s amazing the energy they have here that I don’t see from them (mostly Zoe) in Korea. Off to bed! 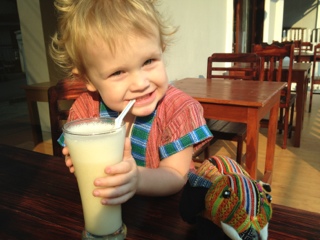 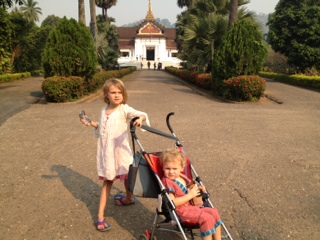 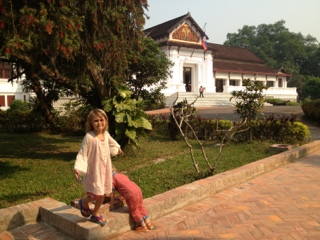 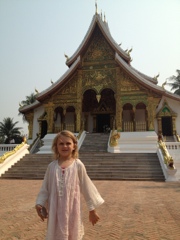 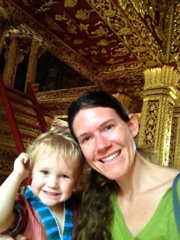 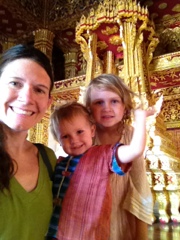 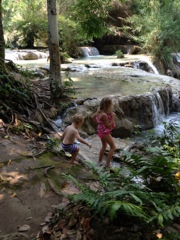 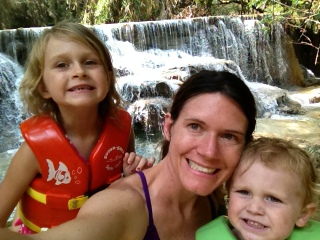 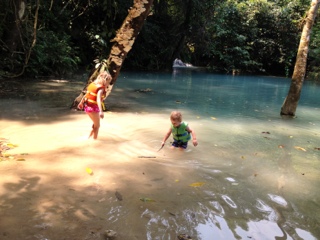 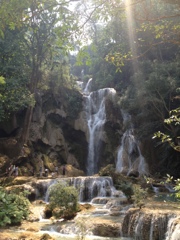 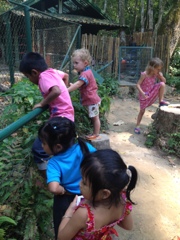 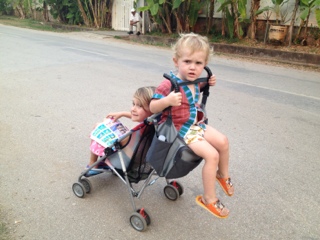 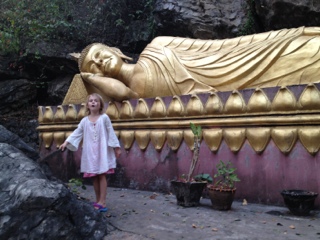 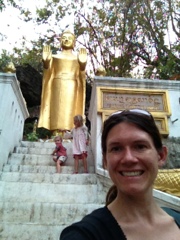 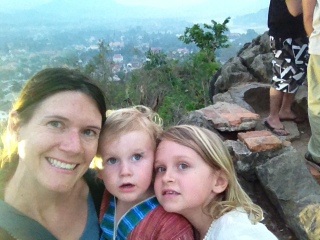 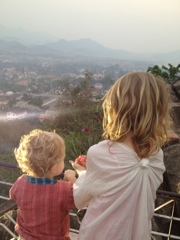 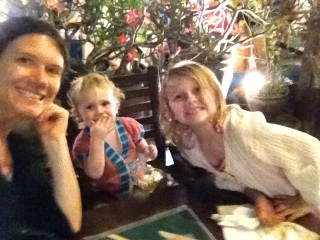