We made a lot of friends today…animal and human! It started with a great breakfast from “grandma” again. She is so cute and silly and teases the kids. Avi isn’t quite sure what to make of her, but laughs when she tickles.

On Monday I had arranged for a tour out to the Pak Ou caves, and sure enough the van picked us up after breakfast. The driver was crazy driving at top speed down dirt roads. After 45 minutes we stopped at an elephant camp by the river. So excited to ride elephants again! AND there was a baby!! It was so cute. Zoe loved feeding her new elephant friend some leaves and petting it. We boarded our elephant via a tall platform and it purred and kept trying to turn around. The trainers put the baby on a leash and brought it over; then our mama was happy! There were 3 other big aunts in the troop and it was obvious as we walked a trail through a village that they all took care of baby. Our elephant wasnt happy until baby was in front of her. At one point a dog started barking and the front two elephants trumpeted at it and we all circled the baby. Amazing. Out of the village they were much more relaxed. We walked through a forest, past some amazing cliffs, and along some dry rice paddys. Zoe was always on the lookout for the baby, and Avi would squeal when we went up or down a slope… It’s a little sketchy staying on.

The surrounding mountains were gorgeous even with the bit of haze. It’s an area shaped by karst topography – dramatic eroding limestone allows for huge cliffs, steep mountains, and caves! That was our next stop. We returned to the camp and fed baby a bit more before walking through the village down to the waterfront. There we got on a long skinny boat. Something the width of a kayak, but more flat bottomed and as long as 3 put end to end. I thought this was awesome – crossing a huge river (it feeds the Mekong) to a cliff cave – mostly the kids wanted snacks.

The ride was short and we got off onto a floating bamboo “pier”, crossed some boards, and jumped onto the stairway leading up to the Pak Ou caves. It was pretty crowded with people from boats that came upstream from Luang Prabang. Still neat to see all the retired buddha statues staring out. This is where temple figures come when they break or are replaced. Zoe brought some special incense from yesterday and lit it. We didn’t spend much time in this cave because of the crowds, instead we went round the side and followed the steep stairs up to the Upper cave. Now this was cool! It was an actual dark cave instead of an opening. I brought a flashlight with us, so Zoe explored around first finding tiny niches everywhere full of Buddhas. When it was Avi’s turn with the light the cave mostly became a party.

After a snack we went back down the stairs and boarded our boat back across the river. From there we walked along the edge of the water back to the elephant camp. People farm the sandy soil along the river and our guide showed us that we were walking in a peanut field! He pulled a whole plant and there grew the peanuts like tiny potatoes on the roots. They tasted like green sweet peas! Zoe ate a bunch and even brought them up to the camp for lunch. Yum!! We had some kind of meat stew (duck?), veggie schlopp, and rice. It was actually delicious and the kids devoured it.

On the way back to Luang Prabang the van stopped at “whiskey village” a tiny place that makes traditional Lao whisky. We were offered samples – the strawberry was good. I didn’t try the strong ones. It was actually really interesting because we’ve seen bottles with preserved snakes and scorpions for sale at the market and found out they are whiskey – for men only. I passed on that purchase.

Both kids fell asleep on the van ride back to the guesthouse where we had a nap and some school time.

Our final night here was a blast! We took a tuk tuk to the end of the old town peninsula where a side stream splits from the Mekong. The water was warm and in inviting, so the kids waded in a bit and played in the sand. Eventually we wandered downstream around the bend to see a huge group of local kids and young monks disrobed and playing in the water. We stayed up a bit because Avi found the perfect place to dig in the sand and Zoe liked the rocky sandbar. Then some of the local boys floated down to join us. They thought Avi was a hoot which encouraged him to get in the water and swim! They showed off jumping in the deep pool and ducking under to pop up and surprise him. He loved it and swam around in the shallow to join them. Sometimes he’d go a bit deep but they would pick him up and bring him back.

Eventually Zoe looked up from her busy sand building to see the fun and joined in. She was greeted with much excitement from these boys! I would guess them to be 9-10 year olds. She jumped right in and joined them and even floated down the current a bit. A few times she got to far out and they would nearly fight over who brought her back. One young guy in particular found her fascinating and played and played with her even after the others lost interest and came back to Avi or built a little stone dam.

Avi got cold and wanted out so they showed him how to roll in the warm sand, which he loved of course. But it got him covered in sand so he had to keep going back and forth. Soon the sun was getting low and we needed to say goodbye. Zoe rinsed off from lounging in the sand and Avi complained he was cold. I had ’emergency’ clothes for him so he got dry. Zoe didn’t care about her wet shirt; it would dry soon enough. We took a great picture with all our new friends and said goodbye. What a fun afternoon!

There is a bamboo bridge crossing the river to a little rocky outcrop that we braved in order to watch the sun set. It was pretty rickety and flexible but strong enough. Across the river we found a spot to hang out. The kids had aquired sticks and dug around in the dirt surrounding the rocks. This spot is not apparently on the typical tourist circuit as we were only joined by a German couple and four monks. There was a small snack stand, so the kids each got some banana chips and I a beer as we sat to watch the sun set. That is when the monks came over to get pictures with Avi. I offered to take some for the one guy who seemed enthralled with my baby boy and wanted to know his age and name. He handed me his phone, careful not to touch even my fingers (I’m a female and that’s not allowed). Then I got a shot with my phone.

The sun set was pretty as Zoe gave us all the play by play as it went behind the mountains. Back across the bamboo bridge we walked along the main road through the quiet old town full of temples. We even popped into the Wat where we met the puppy a few days ago. No puppy to be seen, so Zoe called “Thea Thea” and here he came running! It was super fun to see the little dog again. Jhan, the monk, wasn’t around. Zoe very lovingly gave Thea her stick as we left the playful puppy. By this time it was dark and he street lights were on. I felt we should get out of the temple grounds as more and more young monks were walking around in their under-covering all wet like they just bathed. Time for bed! They wake at 4am and then walk through town around dawn to collect food from locals. This would be something to see, but I don’t think the kids would be quiet and respectful and it’s a bit controversial having tourists getting too involved in the ceremony. It’s really how locals make merit and monks remain humble. What a lesson for a 12 year old to learn!

My two kids aren’t ready for that lesson, and wanted food. On the way to the food shops we past a little store that had a few toys and a little airplane! It was only 3000 kip (.36 cents) and Avi adores it. So much so that he ran the rest of the way into town. We plopped at an outdoor crepe cafe for some sweet dinner followed by a tuk tuk ride back to the guesthouse to say goodnight to grandma. 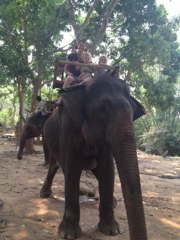 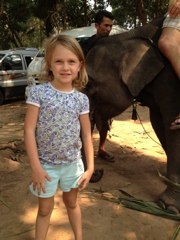 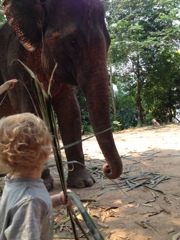 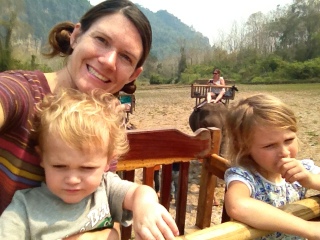 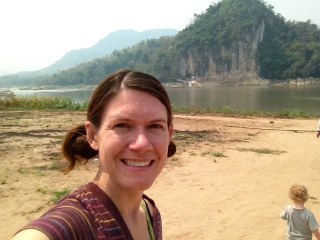 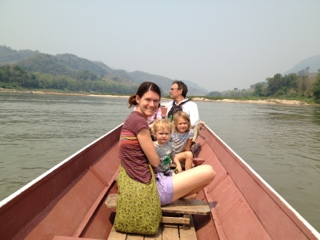 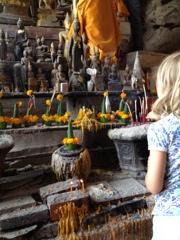 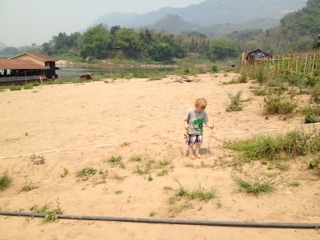 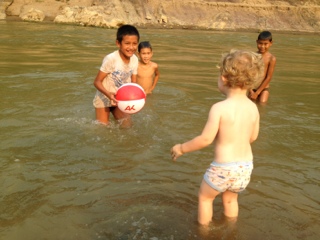 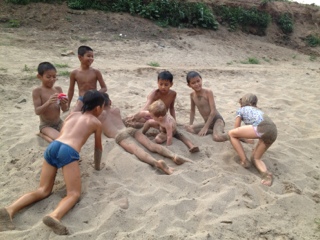 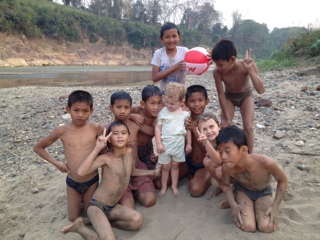 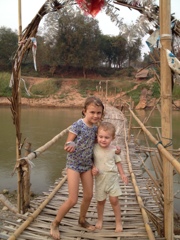 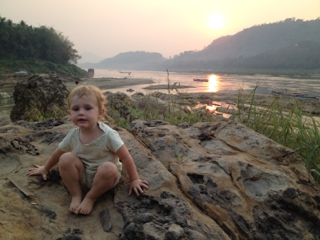 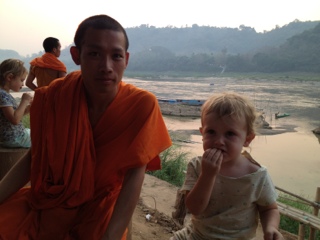 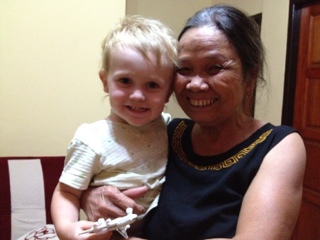 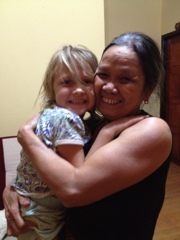