Since today was gorgeous, and there was no school at Osan, Zoe had some friends over for a ‘bunny party’ in the morning.  It’s just a play time at our house, but they did have a great time feeding and messing with the baby bunnies.  Zoe also wanted to do a special cupcake decorating activity.
We had seen a booth setup at the mall in Thailand where you could decorate your own cupcake, and then when we returned it was not around.  Must’ve been just for the weekend.  Well, it sparked an idea in her.  So yesterday we made some cupcakes, mixed some colors in icing and today the kiddo’s got to decorate there own.  It was fun….and messy.

After everyone left we packed up the car, got some BK drive through lunch (I know…), and hit the road to Everland.   The rest of the afternoon was non stop fun at the happiest place on the ROK.  We started with a stint in the Kidzania playland, where Zoe twisted her ankle, mildly, running amuk.  The Everland response time was instant:  kid crying: react!  Two guys brought over some kind of cooling solution-in-a-bottle and smeared it all over her ankle.  It seemed to help and she walked off the rest. We followed that up with Zoe’s trip on her coaster.  Avi and I waited for her at the playground where he was (finally) allowed entry….I’ve tried every time, but he has been too short until today!! This was a big deal and he had an awesome time playing around – it’s all enclosed so the parents just have to watch and he was so much bolder than all the little Korean kids.  Borderline rough, but still a good boy! From there we enjoyed more kiddo rides, Zoe’s obsession with the fun house, and a house haunted with a farting ghost.   The highlight, though, (for Zoe) was the changing of the seasons!

It is now officially spring: Everland changed the big tree from wintry to flower-ful.  It’s covered in flowers and there are blooming tulips, hyacinths, and a few daffodils all over the park.  There are also blooming bulbs for sale in pots….daff’s being quite precious here apparently. In addition to the big tree, the 4 seasons garden near the train has also changed for the season and is covered in spring plants.

While we were enjoying the garden we happened upon a new show that we haven’t seen before.  And, to my shock and awe, it had people actually PLAYING instruments.  From what I can tell every other show is lip-synced.  But, here were some fairly talented brass players, dressed as bee’s, playing their hearts out.  The plot was (as best I could follow the Korean), that the hive was happy, the queen bee was awesome, then 2 guy bees were under a spell and became mean,  an audience kid dressed as a bee saved the day with some magic Korean words.  Cheers!  It was a great time, and we even got pics with the music players…not Koreans, mind you.  I swear the two guys were twins – one on the trumpet and one on the toms (who was obviously a bit too cool to be a bee).

Both kids were fast asleep when we pulled into the house.  ahhhhh.  Some alone time!  Bryan is still stuck in Thailand. 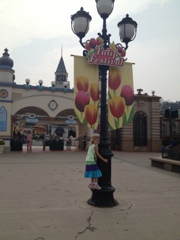 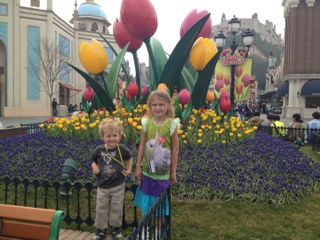 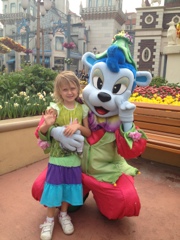 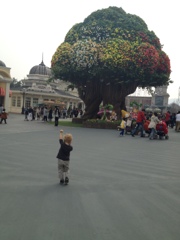 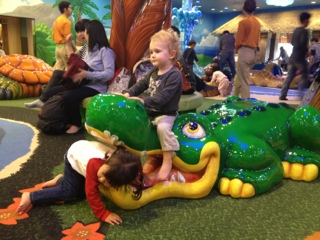 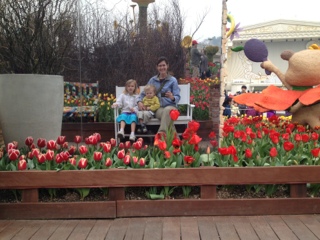 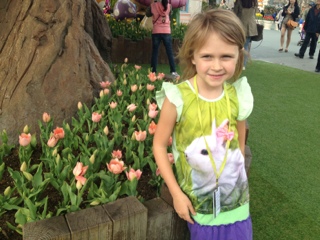 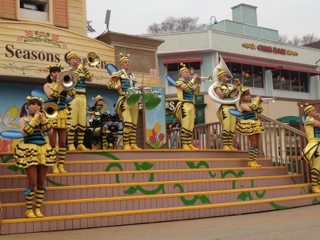