Not much sleep last night.  We turned off the lights in the Kadena terminal kid room and snuggled onto the floor.  I read Zoe a chapter of her book and she went to sleep on a mini couch.  Avi was restless and wanted to sleep on top of the changing table.  He settled up there for a bit, then wandered around, and finally came to lay with me and fell asleep.  Both kids were zonked all night – I think we likely slept around 1am.  I kept waking, though, when I heard a TV or an announcement or to put my spare skirt back over my eyes to block the light.

Eventually it was apparent that it was day and the terminal was getting crowded again, so we all got up.  There was a flight loading for a return to Yokota.  We slowly got around, organized, brushed teeth, the kids played, and we joined our friends upstairs in the cafe for some breakfast. The second floor of the terminal is nice with lots of windows looking out onto the runway.  The highlight was watching that Yokota flight takeoff. From there we spent the rest of the morning out front.  Zoe and Nikki made rabbit nests, while Avi wandered collecting snails with Moira.
We were waiting until noon, hopefully to hear our name during roll call for the Hickam flight.  Well, time came and the list was huge!  It was actually a but nerve racking watching the available seats dwindle from 53 to 20 to 13 when our name was finally called.  Lucky there were a lot of no-shows or we wouldn’t have had a chance. Our friends’ chances looked bleak as they were lower down the roster, but it was awesome they got seats too.
After getting ticketed and checking bags, we split a taxi ride off base to the immigration office to be stamped out of Japan. I had to change Avi’s pants; his first accident this trip. He has been doing great going potty… This just came to quick. Sadly he fell asleep in the taxi and was well rested when we boarded the plane- just when I need a nap!!!
Back at the terminal is was back to waiting.  At 3pm we went through security, around 4 we were bussed out to the C-17, and finally took off at 5pm.  This is a 9 hour flight!  Slow going.  We should land at 0700 THIS morning- love the international dateline!
Busying ourselves  on the plane with videos, our boxed lunches, and attempting to nap. Zoe slept the first 3 hours and I tried too as well, with Avi playing on top of me or watching Mighty Machines. This is a cargo plane so our seats are along the wall with the palettes in the middle back.  There is lots of space, so after takeoff everyone claimed a spot on the floor. I laid out our sleeping  bag in front of our seats.
Avi did finally crash out with me for the final 3 hours of the flight.  Now Im looking forward  to spend the morning in Hawaii, and roll call for a flight to Pittsburgh in the afternoon. 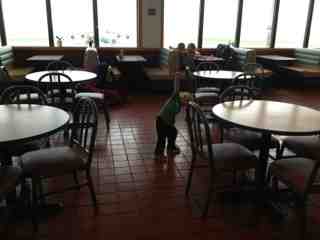 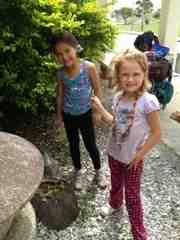 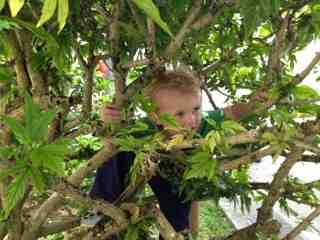 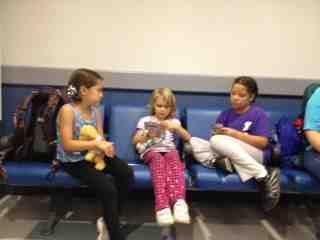 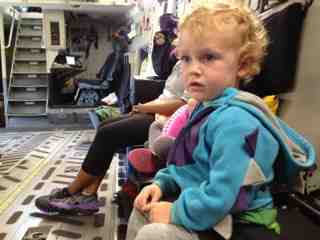 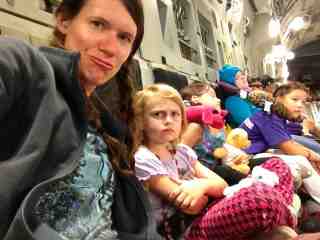 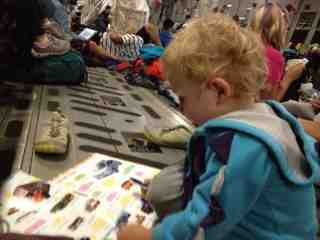 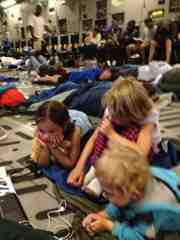