Actually it’s not a super long drive,  but when you are super tired 10 hours seems to never end.

We landed safely in Charleston at 7am, and though I was tired it was obvious I wasn’t going to get sleep.  The kids wanted to play, the terminal was busy, and the couches were taken.  So I called a taxi and we went outside to wait.  The kiddos ran around the front lawn til our ride came to take us all the way around the runway to be Charleston airport.  The ride was about 20 minutes and still cheaper than the 5 minute cab ride to the beach in Hawaii!  Our hertz car was ready even though we were hours early.  From the rental car parking lot I could see the passenger terminal – it was only about a quarter mile away straight across the runway. So funny to think we could’ve walked faster.  We checked in, got the key, and were on our way.  Too easy.
Except that I wasn’t sure which way to go.  Up the road we stopped at the first exit to pop into chik-fil-a for lunch.  This was a blessing as they always have an indoor playland and wifi. They kindly made us lunch food even though its breakfast time.  The kids played and I got online to map our route.  Good thing we had not continued any further as I was heading south!  Oops.
Bellies full and played out we hit the road during a torrential downpour.  A half hour up the road Zoe wanted her bunny.  Well I had asked her to put that thing in my bag but she insisted on holding it when we deplaned. It was not with us.  I could see this was going to be a huge deal…. We have just started to make progress mourning doggy.  I swallowed hard and grumpily drove back through the rain to Charleston.  There it was on the bathroom counter!!!  Tears of joy, a group hug, and potty visit later and we hit the road… Again….5 hours after landing and 3 hours into our rental.  I wanted to stop already.
Both kids were sleeping before I got off base. The rains had stopped and I found the car had XM radio, thankfully.  Listening  to music puts me to sleep, but I can engage in talk radio.  I started with the comedy station, then NPR and finally the doctor show.  Fascinating stuff to keep my mind alert.  I stopped three times quickly at rest stops and a gas station to stretch, toilet, get more caffein, and fuel up.  The kids never woke.
Finally around 6pm I needed to stop.  I had picked up one of those coupon books at the Virginia I-81 rest stop and circled a few options along the way.  At exit 150 I pulled up to the Howard Johnson Daleville.  At $44 a night this is a steal.  The bed is comfy, the room is huge, big breakfast, it’s along the AT, and has a pool. Good spot to keep in mind if you are ever down here.  The kids woke and we explored the grassy acreage around the hotel, picked flowers, avoided the massive poison ivy, and found a ripe cherry tree!!  Yum. Grabbed a few gas station hotdogs around the corner for dinner and hit the hay.  Well I did. We will need to wake early… Snag a super fast breakfast at the lobby and get going.  Another 4 hours to drive and I must drop off the rental by 1015.  It’s going to be tight, except that its 2 am and we are all back awake and feeling rested.  Jet lag is a killer. Trying to sleep again til 5am… Kids are watching some cartoons while I attempt to snooze. Not sure it’s going to work. 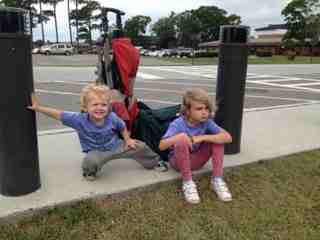 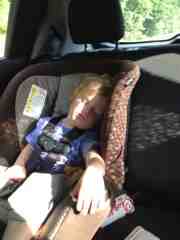 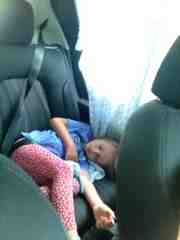 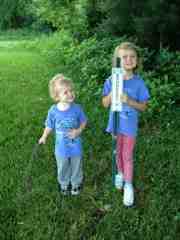 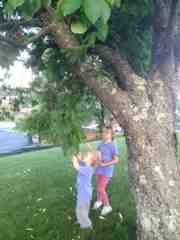 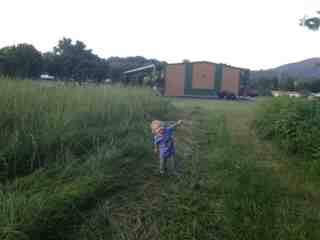 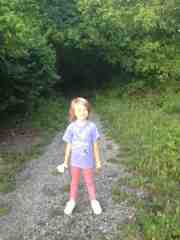