Well, at our I-81 hotel in Daneville… the kids were up at 2am and wouldn’t go back to sleep, so I put some kid channel on the TV and tried to rest – off and on – for the next two hours.  I didn’t really sleep, but laid there and shut my eyes trying.  By 4 I felt so awake that it seemed hopeless.  The kids were busy building a ‘train’ with the luggage racks and chairs anyway. So, with a squeal of “all aboard” I got up and showered and by 5am we were in the car heading north on I-81 again.

The drive was quite nice.  The kids enjoyed watching the sunrise, driving through foggy patches, singing some Old MacDonald, playing eye spy, and listening to NPR.  I seemed to be the only car in an endless stream of big rig trucks.  We made it to Cumberland in 4 hours and found the Hertz fairly easily. Grandpa Joe was to meet us at 10, so the Hertz guy watched our backpack and now-grizzled stroller while I took the kids around the block to a playground for a bit.  When we returned, there was dad loading my stuff in his car!!!  I guess he attempted to find the playground but went to wrong way.

He drove us a half hour to Bedford where we ate brunch at Ed’s Diner, then another half hour home! Yippee, we finally made it to my parents “cabin in the woods” as Zoe says.  She fell asleep in the car and I joined her in bed at the house; for the next 5 hours!  Avi was astoundingly awake and spent the whole afternoon playing with Grandpa Joe, swimming in the hot tub, getting the mail, and riding the lawn tractor.

It’s so nice to finally be here…. still seems a bit temporary as we’ve been in transit for 7 days it’s hard to settle.  In the end it took exactly 7 days – Thursday to Tuesday (which is Wednesday in Korea). We made friends and saved a bunch of cash.

Well, was it worth it?  I kept a running tally…

$434.77 spent on hotels and transportation. The two biggies were the $121.23 on a Honolulu hotel which made me cringe but ended up giving us such needed rest, and the $107 car rental from Charleston north which was unavoidable without spending more money to overnight in Hawaii.
$158.85 spent on food; mostly commissary and a few fast food joints.

Now,  we’ll get down to the business of having a break. 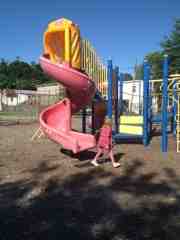 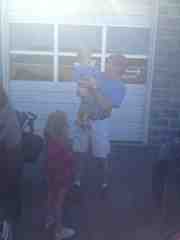 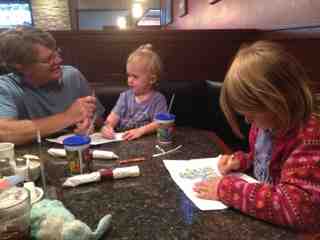