Well,  Fathers Day found me absorbed in my Granddad’s adventure story of whitewater rafting down the Zambezi river. My kids and parents and I spent the night at his place, but the highlight for me was hearing about his trip to Africa with my Aunt Shar about 20 years ago.

It all started when he wanted to watch the VHS tape (!?) that came with his new Mantis tiller.  Well, his VCR was missing cables and bung, so Dad fixed it and we ALL enjoyed the 25 video on how to assemble, use, and maintain the tiller.  YES!  the kids were absorbed in this video.  Zoe even came away commenting about the thing the next day.  Who knew?   Well, with nothing on TV, we asked Granddad if he had any other VHS to use in his newly setup VCR.  The only other one he could think of was of him “rafting in Africa”.  Well!  That sounded interesting.   So, after I showed him some pictures and videos of our life in Korea, he fetched the old tape and we all had a blast trying to spot the Blue and White PSU hat on raft 3 as it navigated the rapids. The guy narrating was super 80’s and cheesy, but it just added to the awesomeness of this thing!

I then asked for some pictures, and he quickly produced an album of the trip featuring himself, Aunt Jean, Uncle John, and Shar at various grass huts in a very dry Zambia.  There were water buffalo, hippo’s, lions eating water buffalo, more hippo rafts, a zebra or two, and an elephant.  It looked awesome, and really realy dusty and dry.  Very Dry!

Anyway, it was good times listening to Granddad tell his trip story.  And this was after bringing me a picture of “Emmy”, the lady he asked out on a date last Friday. He was telling us all about it during our Fathers Day Linner at Hoss’s.  They met at church and hung out at a Valentines get together.

He also showed off his new jewelry-making venture.  Downstairs in his basement in a tiny dark dank ‘workshop’ room he is taking shells and attaching wire to make necklace bobbles.  “To give to my lady friends” he says.  When I asked where he got them, he replies the name of some island off the south pacific that I don’t recognize.  Hmm…another adventure?  NO.  World War II.  He has had this little basket of shells since the war, and is now making jewelry with it.  I asked if he gathered the shells or bought them since they are really shiny.  He laughs at the idea of ‘buying’ something during the war and explains that he would gather them in the ocean with the little creature still alive.  He would let it die and then bury the shell so the ants would take care of the little creature and it wouldn’t stink.  The glossy shell is natural!

My Granddad will be 91 this year.  He is awesome.  He volunteers at the hospital 2-3 days a week, he hunts and fishes on his own, he has a garden, he (apparently) adventures to Africa, he was on a little island in the pacific during WWII where he returned with a grass skirt and shells, AND he goes on dates to Ruby Tuesday (and NOT at senior time; he went during actual dinnertime). I have known this man all my life, but he is often too quiet and stoic that I feel I know little about him…short of the ‘facts’.  Well, he is fascinating!  I guess all this time I needed only ask. 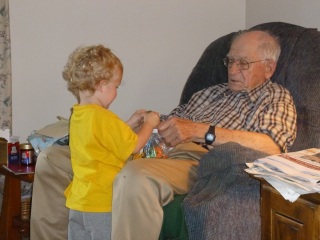