This weekend – well from Thursday to Monday, what my part-time retired parents call a weekend – we hauled the camper to Raystown lake.  It’s a dammed (hahaha) lake with a few campgrounds and resort around it, jet ski’s and pontoon boats, and miles of trails.  My parents like to stay at the Seven Points campground run by the Army Corps of Engineers.  It’s actually a huge place with 7 different campgrounds, a beach, a marina, and more junk. Our chosen campground was called the Meadow.
It was super nice with big ole spaces set around a loop.  On the inside was a little hill and nice playground.

As soon as we setup Zoe joined the kid bike gang going in circles around the loop; she much enjoys her freedom to be independent and explore.  She even ‘discovered’ the trails (sidewalk) within the inner loop leading to the bathhouse and, even better, a huge patch of ripe black raspberries just behind our site.  She taught Avi the art of eating from the berry patch.

Within Seven Points is a small beach that has a huge swimming area.  We visited twice.  Dad created quite the sand castle.  Zoe learned to slide off the floating barriers.  Avi rode and tossed with glee in the waves created by boats speeding in the no-wake zone.  Mom got in up to her knees and goofed off like a kid.  I enjoyed having a few more eyes on the kids, and getting ice cream, and seeing the guy with the travelling owl education wagon.

Another highlight was the morning Dad, Avi, and I went kayaking on the lake. We put in at the no-wake area by a grassy ‘beach’ near the marina.  Avi brought his fishing pole, of course, and busied himself casting and reeling in.  He loves fishing!  It was fun to paddle around and see the different ways people laze in the summer – on pontoons, on ski’s, with their dogs leaping off their boats, pulling boats right up to the campsite, and getting nice and sunburnt. Out past the point the wake got big, though, with all those folks out being crazy on the lake.  I had to make Avi stop fishing for a bit until we skirted back into the next inlet.  Then, as will happen, the wind picked up in our face for the return trip.  Felt good to paddle again. While we were out on the lake Mom and Zoe messed around at the grassy beach.  Zoe swam and floated and collected a ton of tiny shells.

Then, in the afternoon, the storms rolled through and we played games in the camper or (dare I admit this purest camping faux pas) watched a movie on my laptop, or napped. It was nice.  When the rain would let up Zoe was right back outside with her bike gang or going solo.  She spent one whole evening racing one boy and another evening playing with the three girls next door.  Avi liked riding his big wheel down the little hill, hitting the Tball with grandpa Joe, and occupying time digging in the stones.  It was quite pleasant!  Both kids had fun and didn’t need us to hawk over them all the time… and they were having fun separately which meant less bickering.

The highlight of the trip for me was the morning Zoe and I went out paddling.  She really wanted to learn to kayak on her own, so we put in near the beach and she tried her hand in a kayak by herself.  It was tough at first as the current pushed toward the shore, but after I dragged her out a bit she got the hand of paddling and even turning.  She had a good time; I think I will try to take her on the creek next, though, as there is way less actual paddling needed and more sites to see.

On our final night there was advertised a fireworks display at Raystown Resort at “dusk”.  Well, my folks had gone into town for the Steve Martin concert (a fathers day gift) so I took the kids on my own.  They were all excited and raring to go.  Sunset was around 8:30 so I figured we’d leave at quarter after 8 since I wasn’t sure how long it would take to get there….it’s quite a bit further down the lake.  Our weather was par for the weekend; dry at camp, but weird localized rainstorms all around.  I had no way of knowing that there would be a torrential downpour at the fireworks site minutes after our arrival. But, sure enough, we found a great place to sit at one of the scenic pullouts, and seconds after settling it rains.  I grabbed the beach umbrella (it’s all I had) from the car and we huddled under it for the next half hour.  All the other folks retreated to their cars, but not us.  We wrapped up in towels for warmth and spent the time watching a big black snake go in and out of the bushes in front of us.  It tried to come under us at one point, but I rattled the spare chair around enough that it moseyed away.  When the rain let up it was still a bit ‘twighlit’ out so I didn’t think much when the fireworks didn’t start, and then another 20 minutes went by and another and another and the whole crowd got restless.  Seriously, all the folks around us reemerged from their cars and crowded the bridge nearby waiting for these fireworks that just wouldn’t come.  Kids were screaming and tired.  Grownups were arguing about what ‘dusk’ meant and whose fault it was they were still waiting.  Zoe fell asleep, and Avi wanted to go “home to PaJoe’s Camper”.  Then, the lake dinner cruise boat came along and we all (I’ve joined the locals at this point) think that it will surely start now that the paying customers have arrived.  But, to our shock, the boat stayed for 10 minutes and returned from whence it came.  By this time I’m thinking it was cancelled but all of us free sightseers just won’t be told.  I told Avi we’d wait another 10 minutes, and just as I was figuring out how I would pack up our chairs, blankets, umbrella, snacks, one grumpy kid, and one sleeping one to lug back to the car… a single white firework went up.  Then… nothing… for what seemed an eternity….and then more started.  Cheers went up and we all settled in the watch the show.  It wasn’t a glorious display, but a pleasant one-at-a-timer.  Zoe woke and enjoyed them groggily.  Avi declared “I like that one” for EACH firework.  Well, sometimes he said, “I like that one, too” or “I like blue”.   The finale was big and great, and I heard a huge sigh of relief ripple through the crowd when it was over.  Seriously, we all just wanted it to be over as kids and parents alike were grumbling about being tired and who wouldn’t be after waiting in the rain for 2 hours? Both of them fell asleep on the ride home, so we had our promised marshmallow roast for breakfast.

I slept in the camper that night.  I’ve been taking along the tent for Avi and I to sleep in, but since the folks were still out I crashed inside.  It seemed odd to let Zoe alone in there until my parents got home.  She loves sleeping in the camper.  There is a bunk just over Nan and PaJoe’s bed where she gets sleep!

After two weekends in a row of camping, we are ready for a few off. 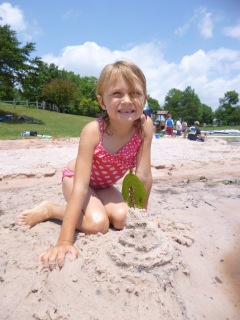 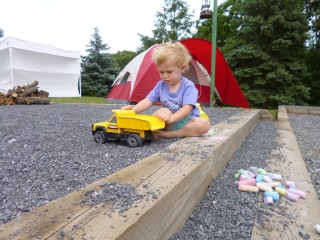 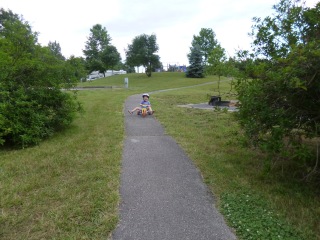 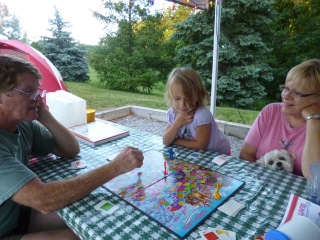 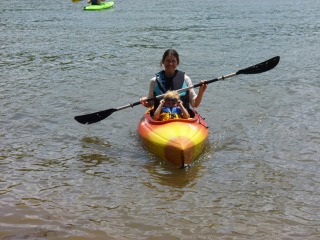 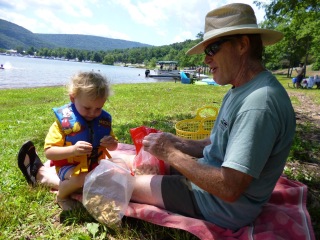