Surprise one:  Avi woke up from nap with a black eye.   Well…..  The kids and I biked into base today for errands and lunch at the BX.  He was playing on a hanging bridge at the playland and (while I was trying to read the odd Korean-Engrish on someone’s shirt) fell somehow.  I looked to see him holding his head and crying.  It couldn’t have been a far fall as the thing is 10 inches off the ground so I wasn’t super concerned, but rushed over and put arnica all over his forehead where it appeared red. He recovered quickly and ran back to play.

I had no idea he actually hit his eye socket until he woke up from nap a couple hours later with a black and blue shiner and puffy eye. Poor guy. He doesn’t seem too bothered by it.
Surprise two: the long lost winter clothes.    When we moved here and unpacked we were really bummed that Bryan and my snow pants, ski coats, and all our gloves and scarves somehow didn’t make it.  I distinctly recall making a pile of this stuff ‘for Korea’.  But it was nowhere to be found.  Well…. Tonight Bryan just happened to decide to take some of his gear into work tomorrow and was moving it from one bag to another when he declared, “Kat you have to see this”. Our winter stuff!  It had been shoved to the bottom of one of his gear bags.  To
bad it took a year to unpack the thing.
Surprise three: yeah I can’t remember just now but it will come.  Its only been 20 minutes since I thought this would make a good blog entry and got the kids to bed. Hmmm.. Not the mold in the salsa… not the box in the mail.. not Zoe’s  specials schedule… not my new discovery that St. patrick wasn’t Irish (it’s in my current book “Mother Tongue” which is fascinating) … what was it??  ugh.  my memory is horrid. Likely I will remember instead of sleeping.
10 minutes later.
Surprise three: sprouting lentils in the bathtub. Well.. We have this playmobil ark that I got at the thrift store for a few bucks and we’ve taken it a few times to the pool.  A while back I also got the brilliant idea to let Avi play with some lentils on the play table with his diggers.  It was fun until they got spread everywhere and the backhoe dumped them into the ark instead of the dump truck.  The ark apparently had tiny crevices because I could hear then rattling around and would collect a few out of the pool on our visits. That has been months ago.
This evening Avi brought the ark into the tub and a few lentils escaped as is the norm. This time, however, they were sprouted!! I put them in a little dish of water.  Maybe we can really grow some lentils from the ark.
Here is Avi in the tub with his black eye and lentils while Bryan and I find space for our winter stuff. 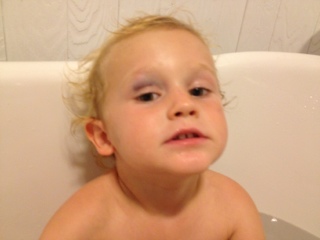 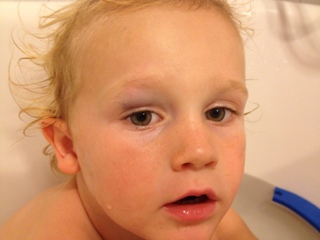