There is a tiger in Avi’s room most nights; he is afraid of it. We’ve been through quite a few things to help him out with this. Sleeping with the big stuffed Dino for protection, exploring real tigers and how they don’t actually live in little boys bedrooms, talking through the fear, singing and distracting… yada yada.  And yet we often end up laying with him grasping around our neck after he’s burst into our bedroom crying. Until now…

The other night I asked him how he could get rid of the tiger and he said to yell at it. I encouraged him to try.  So he stood in the hall and yelled, “go way tiger” into his room.  I said, ” that was great now let’s go in”, and he seemed to think it was gone. He still wanted me to lay with him, but not protecting his life from a boy-eating tiger.
Now tonight he has done it with Bryan.  It is adorable to hear him in his room with his little voice saying, “go way tiger”.

He was even doing it all alone while Bryan went downstairs to retrieve wolfy – a stuffed wolf who also protects against the tiger. What a brave thing to do!  I’m proud of him trying it on his own instead if coming to cry to me.

The whole thing is quite interesting and endearing of our little sensitive guy.
Now here is a picture of him being a tiger – something he often pretends to be when he is awake and playing.  I guess it’s cool to be the predator in the day, but not the prey at night. 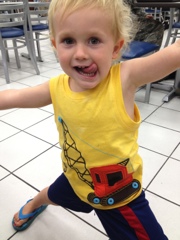