This weekend was sweltering hot and humid, but it didn’t stop us from volunteering at Troops for Trash. This organization meets every first Saturday of the month to pick up trash in town and along the Buraksan mountain trails.  We decided this would be a good kid friendly volunteer opportunity.

Zoe and Avi took it quite seriously and used their long tongs and gloved hands to pick up all kinds of stuff as we walked slowly along the main road in town.  We were the only family among the 30 or so other folks that showed up.  When the group continued over the bridge toward the hiking trails we decided to be finished. It was hot and Bryan and I were quite impressed with the kids honest participation for an hour and a half!  So, before we heard complaints we went home. Lucky, too, because the humidity reached 100% and began a downpour.
On Sunday we tried to get wet down at camp Humphreys splish splash water park.  They have expanded it since we were stationed here a few years ago.  Avi was super amazing and fearless going down all the kid slides AND the big grow up ones too!!  Bryan slid down first and Avi followed!
Zoe also did this and got so good at swimming to the edge herself that Bryan took her to the diving board!!  He jumped first and then she went off.  Bryan escorted her to the edge, but really she did it herself!!  Amazing that swimming has simply clicked for her all of a sudden. She jumped and swam out a few more times on her own, too!
After that the kids were so sleepy they napped all afternoon, while Bryan and I lounged in the air conditioner. 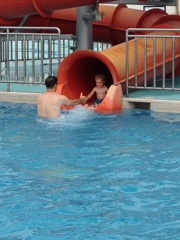 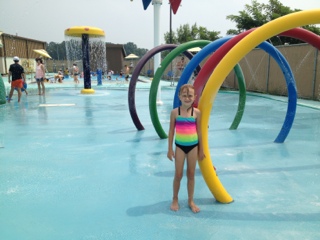 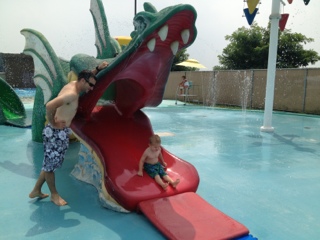 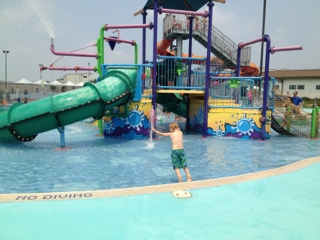 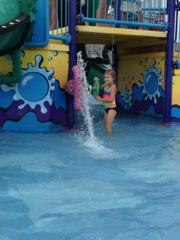