Yesterday was “too coooo with his friend and other guy daddy”.  During our mid morning quality time, while Zoe was at specials, Avi and I biked out to the flight line to watch Bryan takeoff.  It’s a wonder we don’t do this more often, but its not actually frequent that his fly times correspond with our being on base. Anyway, it was really neat!!!  We even spotted him in his plane waiting to takeoff and for to wave at him.  He waved back and then off he went.  He and his “friend” as Avi called it took off together. Neat!

Today was our long day with Zoe spending an extra hour at school; once a week she likes to stay after specials for blacktop playtime (no playground for the over-kinder crowd) and lunch.  It’s great social time for her.  Avi and I almost always get sushi at the commissary and head to the local Buraksan trails for a picnic hike.  I love spending quality time with him- he is such a happy guy when he gets one on one time! 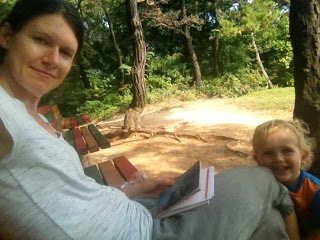