Of course we couldn’t sleep in this morning, so we packed up our goods – kind of a hassle carrying around winter clothes – and found a park.  Out of town past the end of the line is Pasir Ris park.

It was a nice and huge green space full of open land and jungle.  Avi and I walked the boardwalk trail in the mangrove. He was adorable whispering so we didn’t disturb the crabs that hole up in the muck or the giant lizard we saw running off.  Zoe spent her time gathering plumeria flowers from the grove and stringing them into a vine that Bryan shaped into a crown.  Her backpack now smells wonderful!
After an hour or so, strategically avoiding the beach on the other side of the hill, we wandered back to the train and rode to the airport.  It’s gigantic!  And fancy with restaurants and shopping and a spa and free little carts.  Wonderful lunch of veggie Indian food and an easy walk on our Tiger Airways flight to Krabi.
You know the one thing that makes Singapore pretty darn cool compared to all he other giant Asian cities is the variety  of people.  Everywhere else we finis pretty homogenous, but Singapore has so many different peoples!  It’s been fun to spot Indian women in sari’s, Muslim women in various pretty head coverings, and lots of Chinese folks.  We hear all kinds of languages but all signs are in English.  Pretty fascinating. But big. And a city (though it is pretty clean). So we are off to Krabi.
Th flight was only an hour and a half.  Kids slep on Bryan the entire way – seriously fell asleep before takeoff. I tried to sleep but kept getting distracted by the couple beside me who bicker – fought – bantered practicing their English. Apparently he is a horrible packer, breaks things, and needs to shop around because he got ripped off on his lunch purchase and probably that blow up neck pillow and eye mask. She, on the other hand, gets pissed off easily,  feels tired to much, and loses new purchases readily. No offense or argument about all this, just the most matter of fact kind of discussion.  Must be German. Now they are sleeping.
Once we arrived in Krabi, it was easy to find a shuttle bus to Ai Nang pier and a boat ride to Tonsai.  This is supposed to be the relaxed rock climbing area of Krabi.  Seems a bit crowded with young college age folks to me.  The place is awesome though!  Huge cliffs tower around the crescent beach.  The beach is kind of rough, though, with sharp crumbled shell sand.  Ouch.
In the evening we had cool entertainment.  5 base jumpers launched off the highest cliff and landed on our beach!  Then there were fireworks and a fire twirling show at a bar near our bungalow.
We are staying at a cheap hotel in a grass hut just off the beach.  It’s not nice but the price was good and it was available… Lots of stuff was booked when I was looking last minute.  Should be just fine for sleeping and showering.
So some pictures….
Watching the demolition out front of our hotel while Bryan figured out how to get to a park. 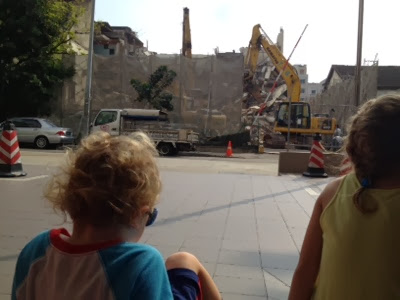 Crossing the street in Singapore 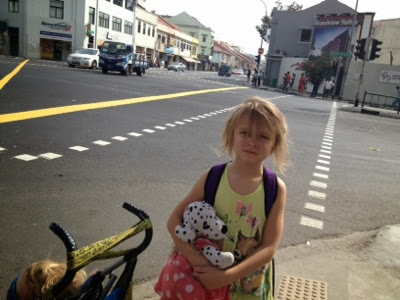 On the train spotting buses, bikes and backhoes 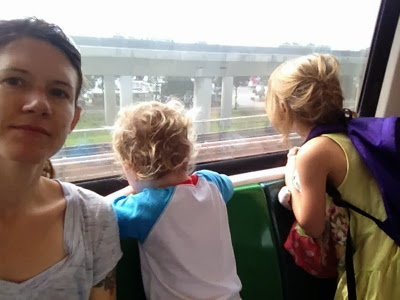 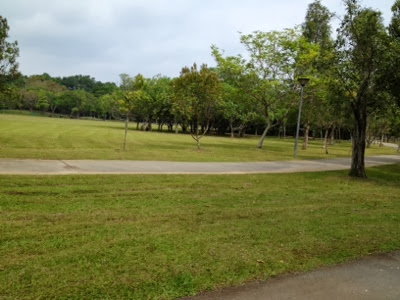 On the mangrove boardwalk 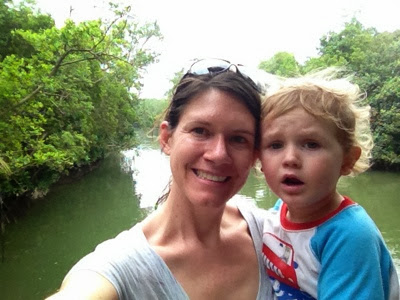 My neighbors on the airplane when they finally shutup. 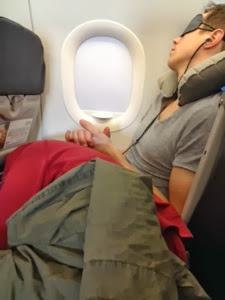 Boat to our beach 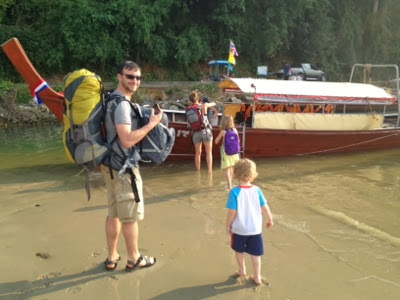 One if the numerous kitties around the place! 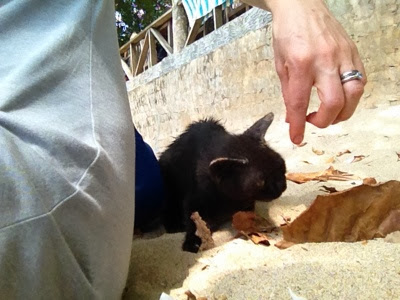