Welp, I felt like crap yesterday morning.  Bound to happen sometime with all our traveling .. I got some bad food.  After numerous trips to the toilet it was obvious I was going to spend most of the day in the fetal position.

I did help Zoe with school and then she started to feel uck as well.  So she and I took a mid morning nap while Avi and Bryan explored.
We felt a bit better by noon and ventured to the beach for a couple hours.  Zoe didn’t seem as affected as me, thank goodness, and played in the sand and water.  Avi had a blast swimming around and messing with the tiny crabs.  But, after that it was right back to bed… Zoe and I were feeling yuck again.  Especially after smelling all the food in along the beach. Avi joined Zoe and I for a nap and Bryan ran some errands getting Tylenol and water.  He also had some nice quiet alone time, I think.
In the evening we played with the kitties around our hut and then watched a movie.
Today was different.  Zoe seemed completely better and I was OK.  Still can’t eat much or smell food, but I’m not exhausted anymore. So, after some school time we went to the beach area again for the kids to get themselves a souvenir.  Zoe selected a stuffed monkey with a baby on its back.  We only just discovered this evening that it screaches when squeezed.  Avi picked out a tuk tuk made from a can.
That outing was enough that I needed a nap, and so did Avi who had been up with Bryan from early. They had gotten up and taken some man-time exploring the local caves again.
In the afternoon I knew I must feel better as we had booked a boat trip out to the local island national park for some snorkeling and rock climbing!  I’m glad I felt fine enough – not 100% but still adequate.  The kids loved the boat.  It’s a small long tail wooden boat with a glorified hand-motor on it. Our first stop was a neat beach to explore, and then a snorkeling spot.  Zoe threw some apple in the water and attracted a ton of pretty fish! Both kids got in the water.  Avi wasn’t interested in trying on the snorkel – he fussed that the mask was too tight.  So mostly he went up and down out of the boat and hung out with our boat driver.  Zoe got the hang of snorkeling really well!  She and Bryan and I found all kinds of pretty fish swimming around!  We also saw a gigantic swarm if huge bats circling the island.
From there it was a short hop to another island for some climbing.  This was our first time free climbing !  Seriously, no harness, no rope, no security. All because it’s over the open deep water, so if we fell it was into the drink. Super fun. The cliffs were huge and we had to climb a little rope ladder to get started.  Both Bryan and I went quite a few times. I didn’t go as high as I coul normally clim simply because I knew jumping was the only was down, and we got pretty high up!!  The kids were funny and would yell “you can do it” when it came time I jump off. Both of them jumped in the water and climbed up the ladders a short way to jump in. Mostly they enjoyed the boat.
From there it was back to some relaxing with sunsetting time on a beach and packed dinner. I’m so glad I felt well enough for our excursion!  Still can’t eat more than a few bites, but generally getting better.
After showers we went to beach at night to enjoy our final night here.  There were some folks putting fire lanterns into the sky, and nice cool sand. 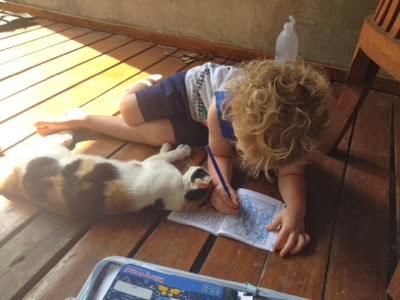 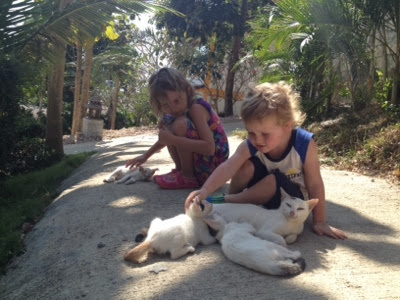 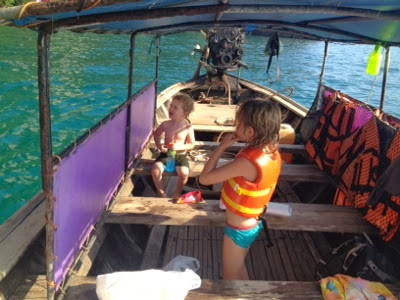 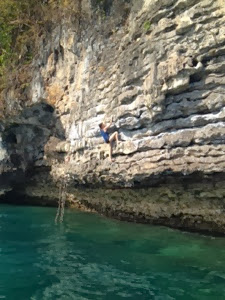 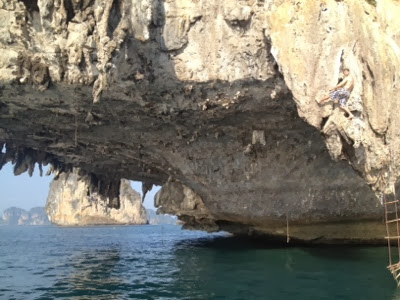 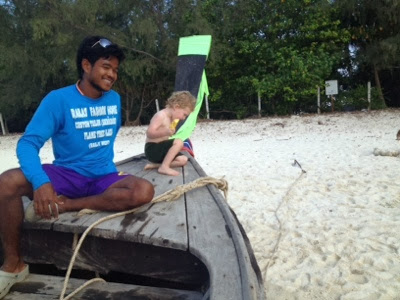 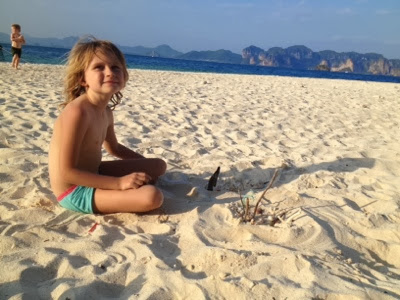 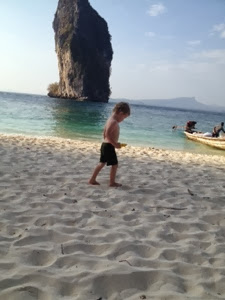