Zoe is the one who needs it.  Her current bike has gotten small. Her knees hit the bars and her seat has no further upness even though Bryan got an extra long seat post for it.  She has been resistant to a new one until recently when she actually decided to look at the type of bikes daddy was researching online.  So, off we went to Osan!
At first the bike shop was closed for lunch so we went to a kid cafe to play and eat before returning.  It was open and chock full of bikes and kid bikes.  We were able to find her one that fit the requirements… Bigger with racks, fenders, hand breaks,  and (most important) a few gears.  It has 7 gears, and is also a foldable.  I was also a color she liked (pink with flowers), though at first she wanted a gold and purple bike that was no bigger than her current one.  It is a bit big for her (up two sizes) but not much.  Bryan got it all adjusted and we took a whirl to the park.  We are pretty sure that for a Korean this is a teenager bike because the whole thing can be adjusted up to grown up size!  It will grow with her for a looooong time. Bonus: it’s foldable. Which we needed to get it in the car as it’s almost as long as my bike.
Avi was heartbroken he was not also getting a new bike.  Sad sack!!  He got a kickstand and big front basket for his bike instead. His is such a perfect fit right now. The new parts soothed the blow and he was over it by the time we went out to ride.  He is amazing on two wheels – just needs a little push start.
Here is a video:  http://youtu.be/1q3nG9sn-9Q
This is ilulu kids cafe up in Osan city 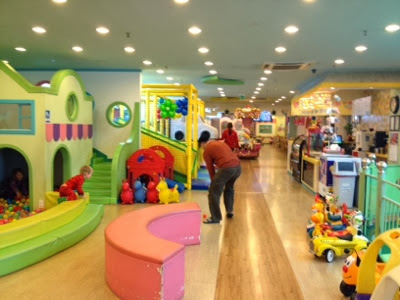 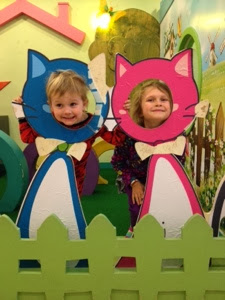 Testing out the bike in the parking lot 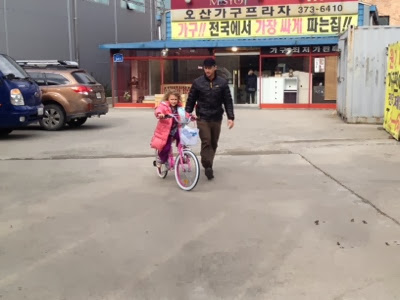 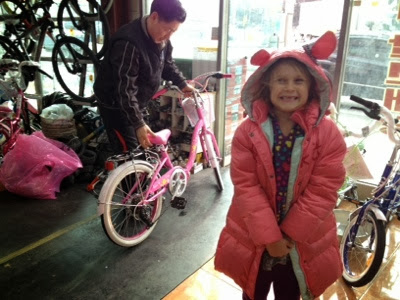 Going for a spin at the park on her grown up bike. 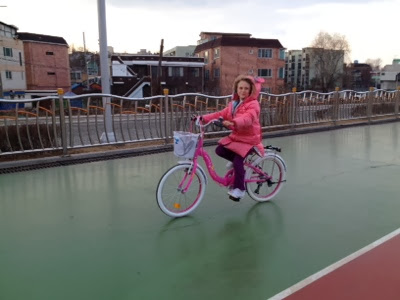 Avi and his bike with a new basket 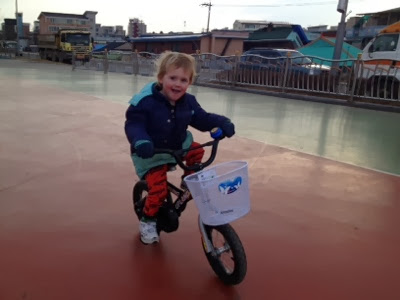