After the super organized environment of Singapore, coming to Indonesia seemed insane.  We made it to our hotel in Bali safe and sound, but it was a bit nuts.

Our flight had a layover in Jakarta with 2 hours to spare.  Getting through immigration was the longest, slowest line ever.  I was getting antsy as an hour ticked away, but then a huge blob of us were directed over to the immigration officials for Indonesians.  I went, as told, but was worried because this was past the “transfer” hallway.
Sure enough, I found us funneled out to baggage claim and then into the street.  I say funneled because it was a madhouse of people everywhere.
On the way, I asked the customs guy where to go and showed him our tickets. He said I needed terminal 3.  Ok.  So, outside a kind taxi guy offers his services or told me the free yellow shuttle bus was upstairs.  Sure enough, there it came and 3 other frazzled and confused westerners got on.  I can only assume the “transfer hallway” led them up here in a more direct way.?
About halfway to terminal 3 I panicked because I wasn’t able to verify that our flight was actually in this terminal.  It was just a Customs guy who told me.  There weren’t screens anywhere I could find to indicate this.
At the terminal we ran in… The kids were hungry.  I had promised lunch at the airport but the time was clicking away.  We only had 20 minutes left!!  Both kids were super behaved and apparently sensed the stress.  I did find a flight to Bali on tiger air departing at our time in terminal 3.  But the number was different!
I had to assume it code shared or something. We snagged a water and chips and hit the ATM before going up to discover a huge line to get into the gate waiting area.  I’m a bit freaked at this point thinking that we will miss the flight, but then I see a chubby American guy I overhead hitting on an Australian girl on the bus… He was on our flight.  Good sign, I guess.
In the waiting area,  our gate still showed flight 12 and not 26 as was on our tix.  Apparently folks just shouldn’t be bothered about pesky details like that as the lady at the desk have me a “well, duh” look when she verified I was in the right place. We settle in the floor until a flight started boarding.
I attempted to get on, but was turned away.   Assuming we needed to wait for our turn we sat down until another giant group of folks went in.  Again, turned away. The third time I tried this,  the lady told me it wasn’t our flight. Oh!  How would I know?  It’s boarding at the door that has a sign for Bali, and a wrong-numbered tigerair flight.
We waited another 45 minutes before our flight boarded. I guess it was delayed.  Could’ve gotten food if there was a way to relay that info to me. The gate area was chaotically crowded, and when I saw a surge of people boarding I went up.  Sure enough, now it was our turn! Good I tried.  The announcements are all in Bahasa, which makes sense, but it was so hard to know as they were boarding a ton of flights through one gate area.  AND none were our number.  Well this WAS our flight….I hoped.  The gate agent looked at my ticket and let me on, so I sure hoped it was headed to Bali.  There are no electronic screens anywhere showing information so it’s hard to know.
Upon entering the gate you are ushered down a stair and out what could only be described as the back door of the airport straight through a construction zone and past a few other giant parked airplanes to the one that says Lion Air. It was a free for all with people stopping to take pictures and walking every which way around rolling carts full of luggage.  I probably could have just gotten on a different airplane with no notice.

Before settling into our seats I verified with a flight attendant that this went to Denpasar.  YES!Anyway, safely on the proper flight and out of that insanity, we settled in for 2 hours of flying.

Landing in Bali at 6:30pm and it being dark was something I neglected to expect.  We are so near the equator that the sun gets up and goes done about the same time every day.  And, at dinnertime it was already down.
The airport is a loosely defined building – meaning I’m not sure if it had actual walls that had been opened or just the wooden gabled roofs. The taxi stand was shockingly straight forward with set prices to different regions.  That was nice and simple.  We got one quickly and joined the chaos of people and scooters and cars and horsecarts that infest this place.
It seems much less a beach town so much as a giant party town that happens to be beside the beach.  Luckily I booked a hotel up toward the north part of Kuta, near Legian beach where things get less crazy and party-shopping-eating focused.  Slightly.
Our hotel is awesome though!  It has a cool multi level pool, great statues and gardens plus a 24 hour decent restaurant.  And the employees have been super nice! The room has a giant king size bed and a huge balcony overlooking the pool.
After getting in we waited for the room steward to come get the bed in order… They had left it as two twins not knowing what if prefer.  He pushed it together into the king and put on a pad so I can’t tell where the crack is at all. It all (airport, taxi, checking in) took a while, so we finally got dinner around 9pm.
Slept hard!
This morning we slept in and got the incredibly large and diverse buffet breakfast included at our hotel.  Afterward we did some school lessons on out big balcony. Then it was pool time.  The pool is incredible!!  Neat different levels and mushroom shaped stools for sitting.  It was super fun.
After our afternoon nap we left the hotel to see the beach.  It’s OK.  It’s huge and wide, but I’m just not impressed.  I guess I’ve been spoiled with solitude in other places.  It’s crowded, full of people selling junk, kind of trashy, and the water is churned up.  It’s dirty and sandy.
Off the beach we walked in town a bit and resorted for McDonalds as everything  else was either too fancy for kids or a bar.  It’s just so crowded with people and scooters.  Not sure I understand the hype of Bali except for being in a resort.  I have friends who have come here and said they never left their resort. Guess I know why.
We are near the popular beach so it could be different elsewhere, but this was one of two areas where you can actually swim in the ocean.  The surf is too rough for kids around most of the island. It’s also supposed to be the best for beginner surfing… Which we try tomorrow.
I booked surfing lessons for all of us and an island tour the following day.  Then we will beat it out of here to nearby Lembongan island for some (so they say) peace and quiet.  I hope so.
Hotel elevator in Singapore.. Getting ready to go! 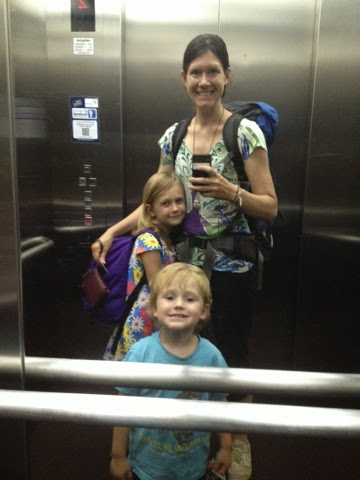 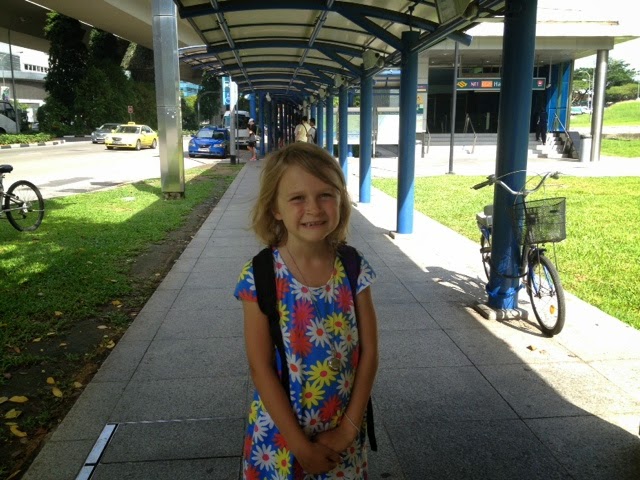 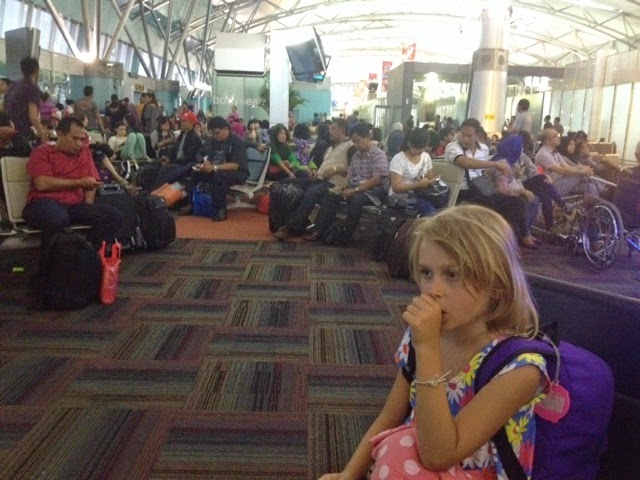 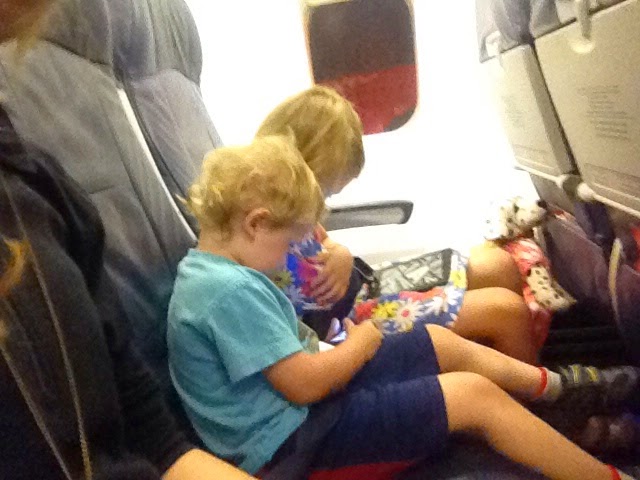 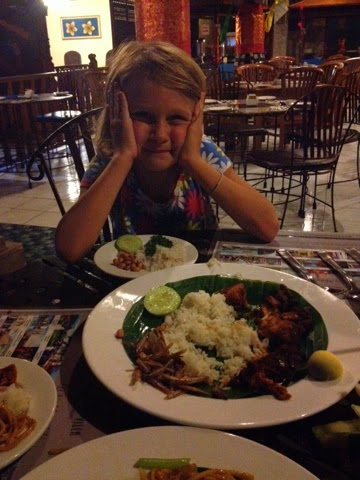 Good morning Bali, this is our view. 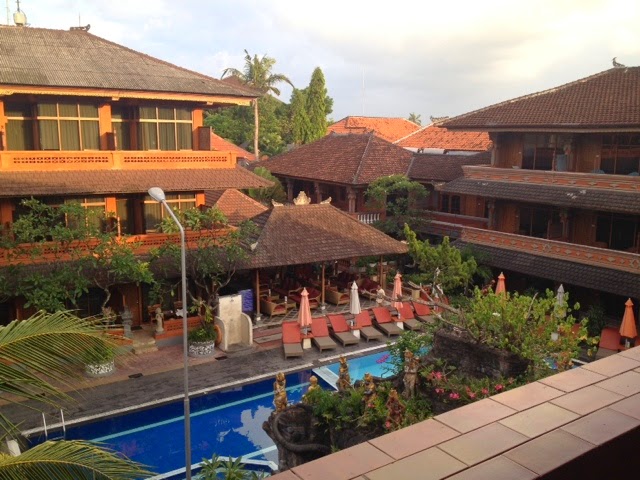 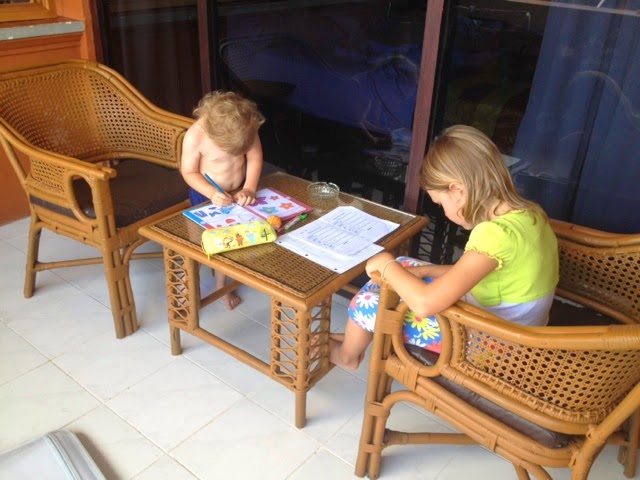 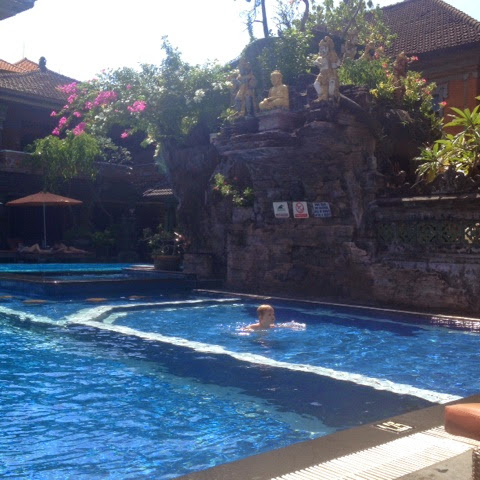 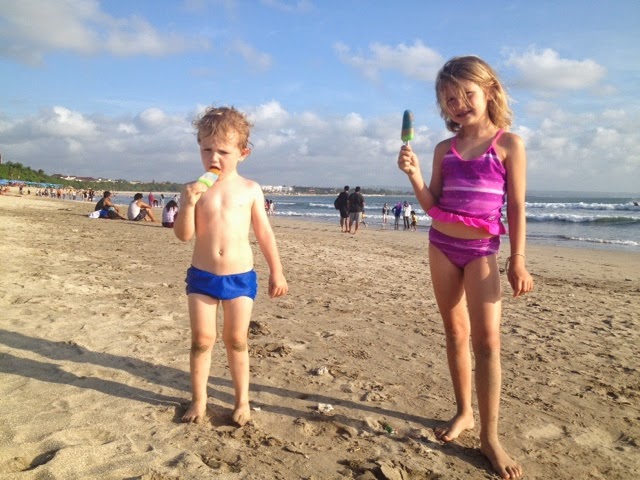 The northern “less crazy” part of Kuta town.  These scooters are just parked….the people belonging to them are on the beach or shopping.  Its not that awesome. 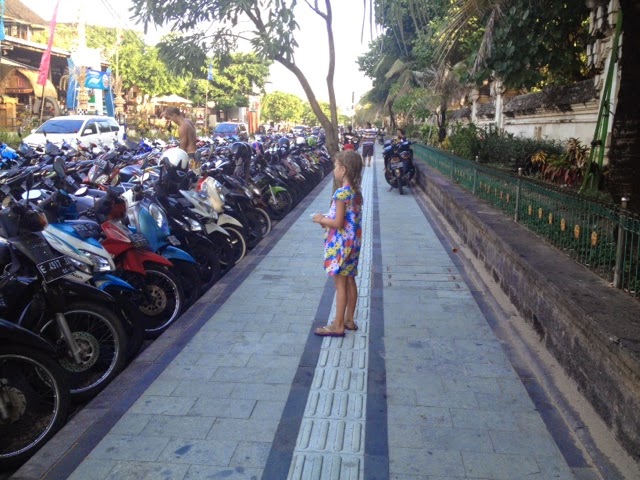