We had a pleasant early morning drive back to Yogyakarta from Borobudur for our flight to Singapore.  We enjoyed a final view of morning routines in Indonesia- tons of kids in uniforms on scooters being taken to school, men on scooters loaded with goods to sell… everything like balloons, chickens, greens, and hats.

Yogyakarta airport is small and mostly outdoors.  Only ticketed passengers get to go inside and there is nothing there but check in counters.  When the flight is prepping to board they announce for everyone to go through security and immigration into a waiting room.  So, we spent or last rupiah on some donuts and fried chicken at the outside shops before our flight was called.  Luckily it was called the right number and in English once.!  Not like our crazy experience in Jakarta.
Silk Air was our carrier this time- not a discount airline, but the price and time was the best.  It felt fancy to get food and drinks without paying. Two hours later we were at Changi aiport and it felt like we jumped forward in time and technology.  Singapore is so modern and clean and tidy and easy… It’s like being in a pretty American city.  But safe.  And no gum.  And no food on trains.  Rules.
Took the subway to our hotel in little India.  It’s great!  We had a blast walking around the area: specifically searching for bindi’s.  Zoe wanted a new stash.  She loves wearing them – it’s her jewelry of choice.  So we got a bunch for cheap.
We also got some henna tattoos!!  All of us.  They were cheap and sucked in the kids first.  Avi got a cool dragon on his hand and Zoe and I got matching flowers. It was fun!!  I also enjoyed a great takeout Indian meal of “I don’t know” – whatever they had at the food but today.  It was great!!
The  wanted noodles in the hotel after our dip in the top-floor pool. Tonight it’s fantasia and sleep.  We are a few hours off and heading to bed late. The space-A flight we were going to attempt tomorrow is now the following day.  So we will take advantage of an extra Singapore day and go to the science museum.  And maybe get more bindi’s, or a sari, and definitely some more Indian food.
Going to school. 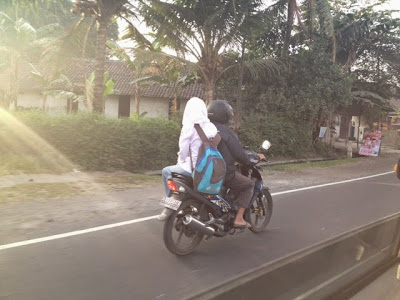 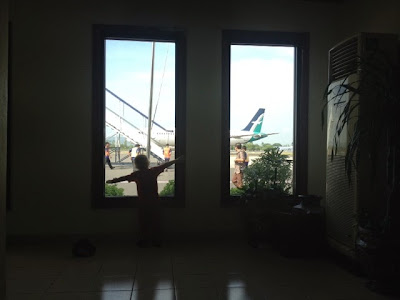 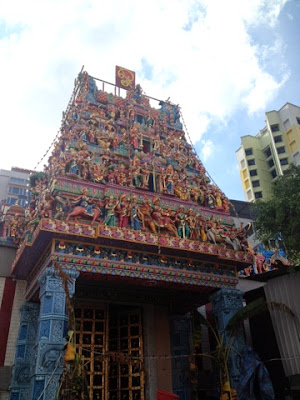 Zoe excited for her bindi hunt 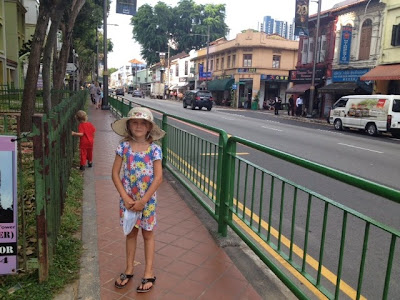 Found the mother load of bindi’s and any other costume jewelry you may need. 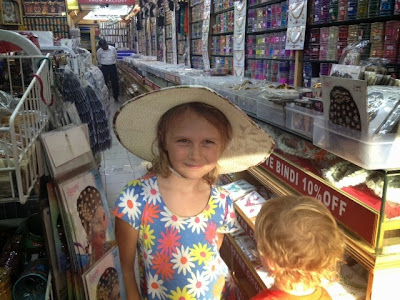 Avi wanted and needed new sneaks… So he chose these lovely items that I didn’t know lit-up until we walked out. 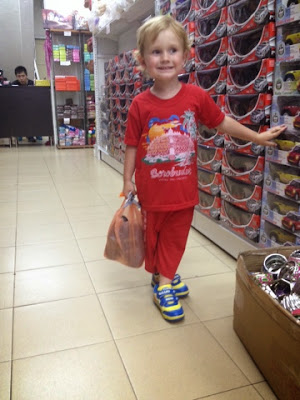 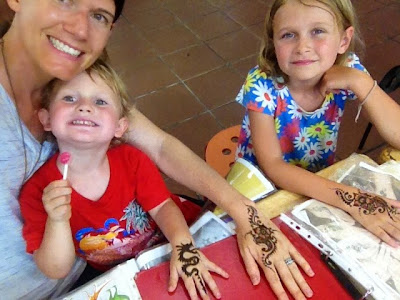