Well our first couple days in Mongolia have been great.  Our flight from Seoul was only 3.5 hours long and uneventful.  The Chinngis Khan airport is small, so it was quick to find our ride.

I prearranged for a driver to pick us up from our guesthouse. We are staying at Golden Gobi guesthouse which is kind of like a hostel and hotel and guesthouse. The owners live there, and share the kitchen.  We have our own room with a double bed bunk, but the toilet and shower are down the hall.  Plus, there are all-bunk dorm rooms. It’s a busy place!! 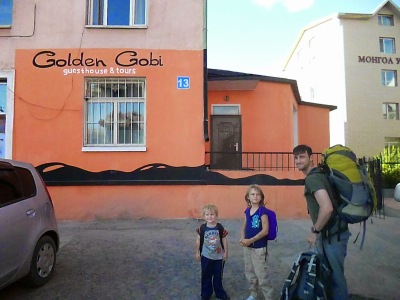 Check in was easy. After that, we walked to Sukhbaatar square where the Chinngis Khan, Kublai Khan and Ogedai Kahn statues are guarding the government building.  They were neat but we more enjoyed all the people renting bikes and skates and stuff.  People were just out and about at the park and so were we.

Dinner was noodles back at the guesthouse. We all slept pretty well there.  Beds are comfy enough.

Breakfast in the morning has been bread with butter or jelly or Nutella, or an egg; maybe some yogurt.  The owners Ogie and Bob are super helpful arranging tours with their friends and family all around the country. I emailed Ogie back and forth a lot before we came so our trips are prearranged with her.

On our first full day here we walked to the Gandan monastery.  It’s a large complex of temples and schools and monk residences.  The highlight for the kids were definitely the pigeons. We bought them each a bag of food from an old bird-lady and they spent a ton of time feeding them… Out front… By the temple….In the courtyard…Trailing birds behind us.   Zoe was picking them up and releasing them (a skill she learned in Java) by the time we left. 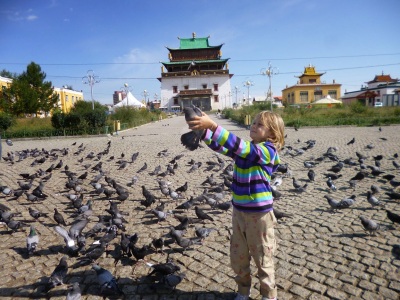 Bryan and I liked the monstrous Buddha statue in the main temple.  It filled three stories!! Mongolian Buddhism shares it’s heritage with Tibetan Buddhism so there are many similar sights like prayer wheels and all kinds of protector deities.

The temples are wooden and multi tiered like many Asian temples, but the lower level is covered with dirty white stucco on the outside.  Inside, every surface is covered in colorful but super faded paintings or tapestries and hangings. In one room the red robed monks were chanting so we sat and listened for a while. Avi liked finding the dragons in the wall paintings while Zoe found their bound- parchment books interesting.

From there we walked back to the square we saw last night and visited the National Museum.  It was OK.  The history is fascinating!!! Zoe appreciated a lot if it – stone age tools, pottery, trinkets from Huns and Mongols.  Avi grew tired, though he thought the native-dress area was cool.

It was nap time back at the guesthouse before taking a taxi to the big market.  This was a huge open market with clothes and bikes and antiques and all the trappings to make a native ger (like a yurt).   It was cool.  Kids got some bracelets and one vendor lady gave Avi a ceramic horse he was ogling; it’s saddle is broke but he loves it. We also got some wool clothes and silk fabric. Cheap! 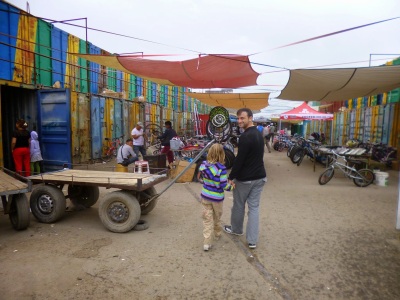 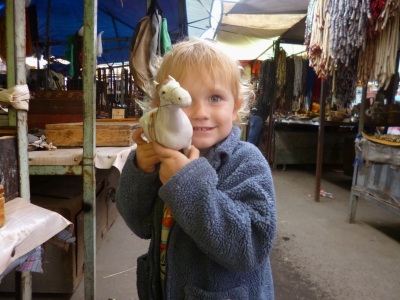 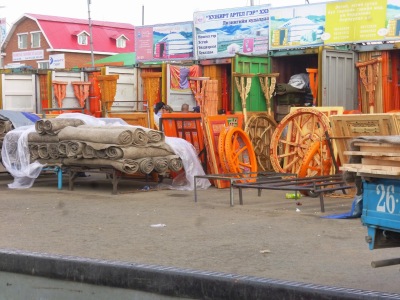 Today we slept in and then wandered down to the city children’s park. It’s odd. Ulaanbator is trying so hard to be a city but some things just aren’t working.  There are fancy skyscrapers here, neat eateries, and other modern stuff.  But then there are tons of abandoned construction projects or vacant lots with a ger in the middle.  The roads are super nice and wide but some of the side streets are still dirt; the sidewalks and most other infrastructure is in disrepair. There are green spaces but the grass is all completely overgrown; we can’t let the kids run around in the park as there is broken glass all over the place.  There are fancy new homes built and also a whole hill occupied by colorful corrugated metal fencing dividing off properties for a single ger.  It’s just amazing to see how the modern blends with the nomadic tradition.  I don’t believe either is seen as better – just your choice.  In fact at the market there was a huge section of furniture sized for gers that are quasi-permanent in the middle of the city.  So, it’s nice and it’s not.

Anyway, the children’s park was not that awesome.  There are rides, but many were for bigger kids. Zoe was mad she couldn’t ride even the small coaster.  There was a fun playground and sand pit, though, so we had a fun enough morning. There was impending rain which has held off except for some sprinkles.  It has been a lot cooler than we expected.

This afternoon we walked to KFC for lunch and to hang out.  We went to a cultural show called Tumen Ekh at four o’clock then to the guesthouse for an early night.  The show was awesome!  There were a ton of super shiny colorful traditional costumes, plus really unique musical instruments like one that looked like a twisted black saxophone and another two stringed fiddles with a horse head scroll that was played like a cello.  The most amazing thing I heard was the throat singing.  A man came out and made a sound from his mouth that sounded like the deep horns we hear at temples. Then he sang like that and made other amazing high pitched noises too, but from his deep throat not his mouth.  Zoe liked the acrobat who could twist herself so much she stood her feet onto her head, oh and the last dance with huge masks that looked like Tibetan Buddhist creatures.  Avi fell asleep half way, but enjoyed what he saw and said he liked the dancing best.  It was in an odd building, like most places here, with no landscaping and overgrown grass everywhere. We stopped in earlier to check it out because it looks so run down and closed, but it was nice inside!  The show was definitely a highlight of our time in Ulaanbaatar.

For a fun evening we went back to Sukhbaatar square to rent a 4 seater bike.  The kids loved it and also rented a few singles for their own time around the square.  Bought some art from a few guys selling their own family’s work.

Flying to Dalanzadgad in the Gobi desert tomorrow. It think we are a ready to be out of the city!