Let’s be frank,  transport in Mongolia sucks.  Did I expect it to be great? No.  But I did expect the time estimates from it tour company to be on target.

Today we drove about 5 hours and are only halfway to our homestay. I was told  it would be 6 hours total!!  Either our new driver isn’t great or the tour company is vastly confused.  Disorganized too.  I had been impressed with her promptness at emails and all the trip prearrangement, but now I’m disappointed.  She called the cell phone at our “halfway” homestay to tell me she miscalculated the trip cost and forgot to include the driving to the homestay.  Then she wants me to pay the massive difference.  No!!  We won’t let it spoil our trip, and came to a compromise but it still turned me off of Golden Gobi guesthouse and tours.
Not only that but our flights were changed on us too!  Hunnu Air had emailed me just before we left that they changed our flight down to the Gobi, so I had that under control.  But we woke early in Dalanzadgad to catch our return flight – and gather our new driver to the homestay- got to the empty airport to find it was now going 4 hours later!  Crazy!!  For an airline especially.
I expected delays for vehicles driving on bad dirt roads and slowness of Mongolian service,  but I’m frustrated with the tour company and airlines for having such surprisingly poor customer service.  What I am happy with, though, is the view.  Mongolia is VAST!  It is HUGE!  Today as we drove, we saw gers dotting the countryside, a nice rain storm, green hills, and goats and sheep blocking the road….a fairly major road at that.
Time for a rest stop! 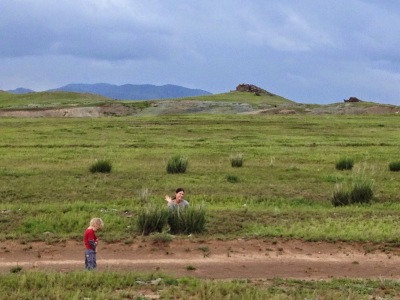 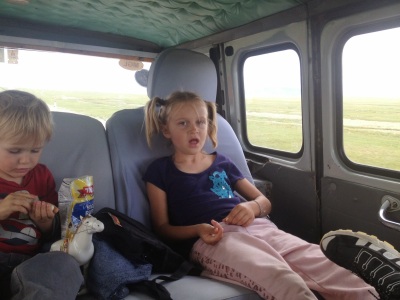 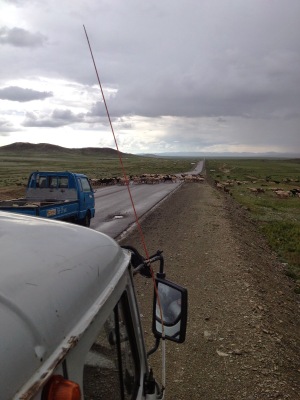 Regardless, we had a great time at our halfway ger camp.  The family was so friendly and loved the kids.  They chased the goats, rode the horse, and played with the kids who lived there. The Dad loved Avi, too, and joked about us leaving him with the family.  He wanted to train him up to ride in the Naadam!  He had all girls.  It was so pleasant with that fam, that we were looking forward to the same at our 5 day homestay. 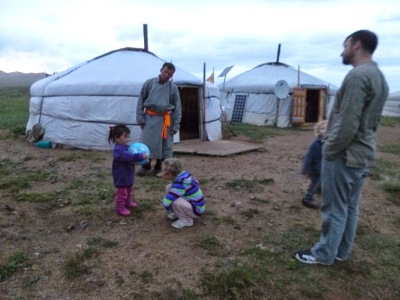 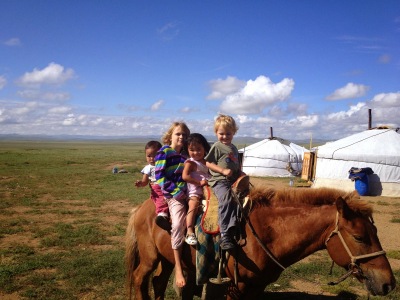 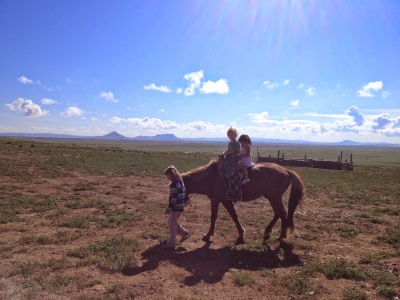 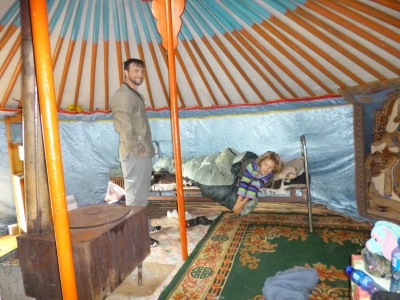 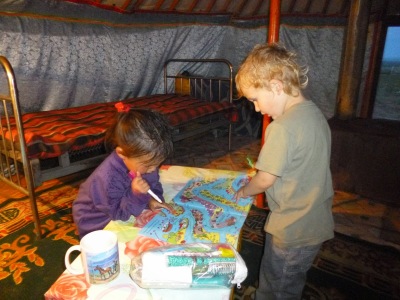 Well it hasn’t been as cozy.  The drive here took another 5 or so hours.  Which was wild.  I think our driver is trying to preserve gas too much.  He also didn’t seem to know the way very well, took us a longer route than we expected based on the map, and had to ask numerous people in one town where to go to meetup with a lady who showed us to the family.  Again, he is kind and I feel the tour company left him at a loss without all the info he needed.
I particularly chose Golden Gobi because they had good prices and were local run – meaning Mongolians own the business. The owner was also super quick and efficient at email correspondence and answering questions.  Another company I tried ” Ger to Ger” never even replied to my 3-4 tour requests!  I supposed I’ve learned that the Mongolian slowness and inefficientcy I read to expect in travel extends into business as well.   I wish I would’ve gone with one of the German run companies who still employ locals … If anyone could possibly be organized in Mongolia it would be Germans. A bit out of our price range, though.
Our new homestay family is nice and hospitable but it’s obvious they haven’t had many (any?) other visitors.  They mostly stare at us.  Also, we are sleeping on the floor of their own personal home ger.  I was looking forward to some private space in our own guest ger as we’ve seen at all the other ger camps, but this is real life I guess.  Still, it’s a beautiful valley we are FINALLY here and the kids are loving the animals. We have 4 nights here so maybe the family will open up a bit. We may be the first foreigners they’ve ever hosted.   ***YES we are, In Fact we are the first foreigners they’ve ever SEEN ***
Our valley in the Kangai mountains 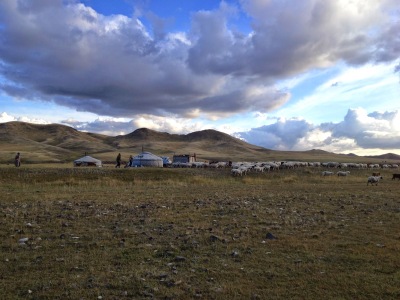 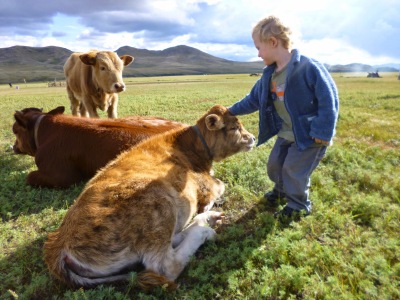 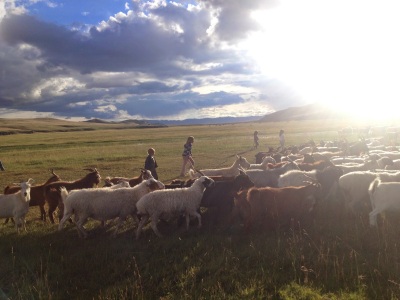 Moonrise over our home for the week 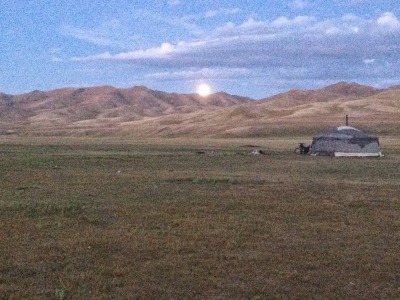 Our bed on the floor for the week….the stove in the foreground, and buckets of milk in the back. 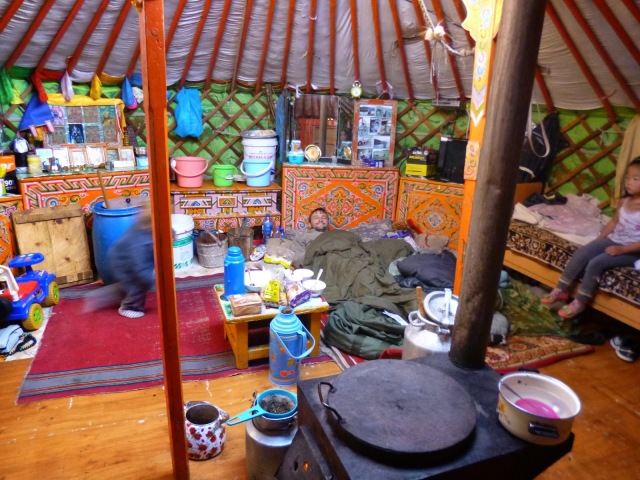