Thanks to the remnants of typhoon Fung Wong we finally got a nice rain yesterday.  It’s been beautifully sunny and warm, but chilly at night, for weeks.  The garden was happy for the drink!  This time of year is so nice in Korea.

We stayed in and worked on a science collage.  Avi loves cut and paste, so he produces more pictures for it than Zoe.  This week we are studying coniferous forests and found pictures of the taiga, mushrooms, reindeer, and moose.  Zoe gets distracted and reads the articles in the magazines.
She and I also worked on the rough draft of her epic quest story that she will decorate as an illuminated manuscript.  Studying Beowulf and the Anglo-Saxons right now.  She is excited to be moving into the Dark Ages. 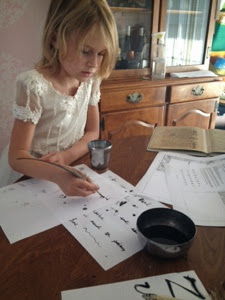 In the afternoon we visited a new jjimjilbang that we pass on our way to Camp Humphreys. I’ve been waiting for a nice rainy day to go.  It was just OK… New and nice but small. There were two hot tubs in the sauna and one cold pool which the kids spent most of their time in.  The jjimjil (coed area) was small with only a couple oven rooms a a nice cave.  We had dinner at the little cafe, and came home clean and relaxed for bedtime. 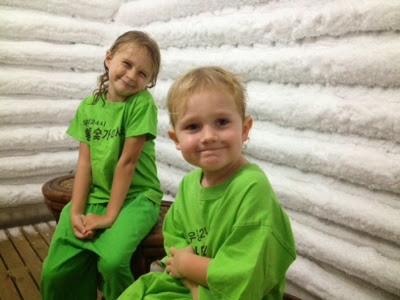