Last year my pumpkin patch was overflowing but this year I’m looking at 3, maybe a few more  if I snag them from the ajumas area… She left them to rot last year.

I sooooo love the Korean pumpkins and need to restock my stash of seeds before we leave next summer.  They are the best pumpkins ever… The flesh is so sweet and thick and almost orange it’s so packed with nutrients.  They taste so good on their own, especially roasted!  Like a butternutty-kin.  Anyway,  they are also awesome in soup and pie with their great flavor.
Do I’ve been a bit bummed my patch was not as productive. Then, today after Avi’s modeling gig I went to the commissary to find ALL their pumpkins were free!!! I guess they figured that with Halloween over no one would want them.  Except ME!  loaded a cart with the best flat Korean ones ( I need to learn this varieties name) and headed home for an afternoon of baking.  I also had a meal to make for a friend who just had a baby.
Funny,  I also grabbed some I the “pie pumpkins” they had .  You know, the little ones they seem stateside just for pies.  Hey are supposedly grown for their thick flesh and sweetness.  Well they are just simply wimpy and flavorless compared to the Korean ones.  I’m so hooked. I got some of the other wives in on my pumpkin craze too…. FBing out my recipes and the free source.  I’m crazy enough about these I’ve just made a whole blog entry!
Big flat ones are Korean… They come in orange, white and green.  All good. 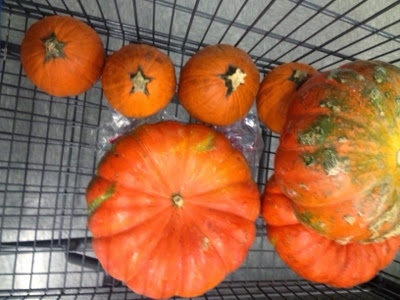 Just look at that pumpkin!  It was a white one 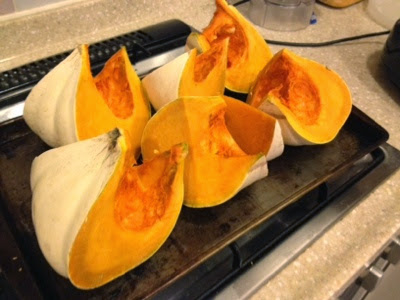 My stash!  I grew that small one in top. 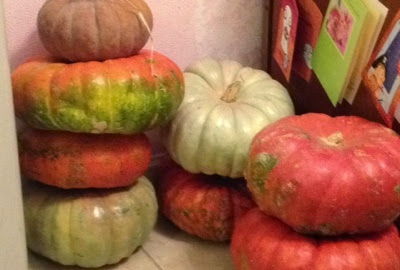