Two years ago when we first got here and were exploring downtown, two little bunnies were in a cage outside getting some sun.  They were adorable!  Tiny, fluffy and cute.   Zoe and I were in love!  We talked Bryan into getting them and returned with a plastic bin to buy the bunnies.  We figured out they were siblings, but not sure on gender.

Bugs was named by Avi and Bryan, while Snowflake was Zoe’s.  We got them a nice cage and let them run around the house…Bugs even got pretty good an returning to his litter pan.  He was the sweetest bunny ever!  Bugs would just sit on our laps and lick our fingers; and lick and lick and lick.  Snowflake was fun, too, but not as much of a cuddle bug.

They spent the winter occupying our mud room.  I got lots of hay and set them up with a great run around area.  They would join us on the couch for reading time, or lay with Zoe during quiet time.  She always kept a little box lid in her room for the bunny to sit upon.  Bugs never had an accident!  Snowflake used the box.

In spring we were eating dinner and they started fighting again…this was some wild rumpus they had started doing.  One of them would squeak at a real high pitch and run around.  We would always take out Bugs since he had become the favorite; Snowflake was nipping at us now.  Anyway, I went in to check on them and there were 3 baby bunnies under Snowflake!  I called in Bryan to show him first, and then the kids came in and were ecstatic!

The baby bunnies were adorable and it was fun watching them grow.  Zoe kept a journal and we took daily pictures. We named them, Puddles, Precious, and Snow.  By spring they were too big and too much for their cage in the house, so I got some chicken wire and fenced in the area under our back deck.  It made a nice big run and space for them!  We started advertising for others to take the bun’s, without any takers. We did get Bugs fixed!

Then Snowflake started to escape.  She would dig under the fencing and take two of the babies with her: Puddles and Snow.  We stopped bringing those rabbits inside to play since they were taking after mom with her nipping and escaping.  They seemed to really want to be wild.  We would let them run around in the yard and eat grass quite often, but only Bugs and Precious were the bun’s who continued to get inside time.

Precious was definitely the runt; she was tiny and stayed littler.  Snowflake didn’t seem to take much mind of her, and we noticed that Bugs took his daddy job with her seriously.  She took after him and was super sweet and docile.

Snowflake and the two others escaped again, and we decided they simply wanted to live in the wild.  So, we went on some adventures figuring out a good place for them.  We finally found the perfect spot: down by the river there is a large grassy natural area.  It was perfect for bunnies, and so we took Snowflake, Puddles and Snow.  Found a hollow area under a tree to make a burrow for the day and left them with a bunch of spinach.  It was a fine place for them, and there was no sadness.  They had gotten kind of mean and skittish and didn’t seem to like handling by our fam.

Meanwhile, Bugs and Precious became our little loves.  We brought them in often and let them run around in the backyard while we were out.  They still had the big run under the deck and we built them a cozy warm house out of a drawer and insulation for the winter.  Bugs was a good daddy and dug a huge burrow under the drawer, too.  So, another winter went by, and a spring, and a summer….and we were loving our rabbits.  Bugs was as sweet as ever and came running for the door when we opened it; he liked to be brought inside.  Precious wasn’t as excited to come out of their house, but was still sweet when we would get her.

It has just started to get cold and we talked of bringing them inside this winter to live in the bathtub.  This morning I went out to feed them, and Bugs didn’t come running.  It is cold, but that isn’t normal.  I could see one of them in the house.  So I crawled in to find a sad sight.  Bugs was laying in the burrow dead with Precious laying on top of him.  I brought her in immediately and got Bugs as well.  It was so sad!!!

Zoe was beside herself as was Avi.  We brought in Bugs and spent time with him, while holding Precious.  She seemed sick.  She was shaking – not like a cold shiver, but shaking.  We bundled her and tried to feed her but she wouldn’t eat.  They had plenty of food in their bin outside, so it seemed they weren’t eating outside either.

When we left to run errands we put Precious in the tub, bundled and with some spinach.  Sadly, when we returned she was dead too.  So Sad!!!!

We didn’t bury them right away, but found a nice box and let the kids mourn.  Zoe made a beautiful picture for them and we selected some special items to bury with them.  Bryan dug a grave the next day and we had a special ceremony.

It’s a mystery to me what happened…. I looked up stuff, and it could be a few things….   maybe they were too inbred and susceptible to illness or digestive issues….  maybe they were poisoned … it does seem odd they died in a similar looking way as the two local kitties a month ago. … maybe they got a parasite.  I don’t know.  But our hearts feel empty without a pet.

We love you Bugs and Precious. 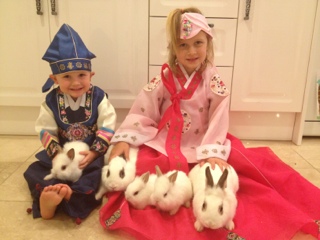