I fear I’m becoming a beach person.  Not the beaches I grew up going too – cold British stone beaches or the flat cold-water of the Atlantic coast,  no.  I mean really nice beaches.  Soft white sand, shady edge trees, some scenic cliffs and mountains, torquoise blue water,  and WARMTH. That’s the key.  Warm water and warm weather.

I always disliked the idea of going to beach because it seemed sandy, cold and boring.  What do you do?  “Nothing. Swim. Chill out.” boring.  Well I have finally figured out that is not all there is to do on a NICE beach.
Bryan is busy at work for an excercise, it recently snowed which was fun to sled in, but the kids had this hacking korea-cough for a while and I was antsy.  I know Christmas is coming but we hopped a space-A trip to Hawaii.  Bryan suggested it… Even got me the paperwork without asking.  I think he is looking forward to some good sleep.
We got on a C17 direct to Hickam from Osan!  It was easy.  They didn’t even do a proper roll call, just said everyone was selected.  I was surprised to see a friend of mine and her daughter as well!  She needed a break too, so we had a good time yapping while the kids played, until the plane started up and no one could hear a thing. Took off at 6pm. 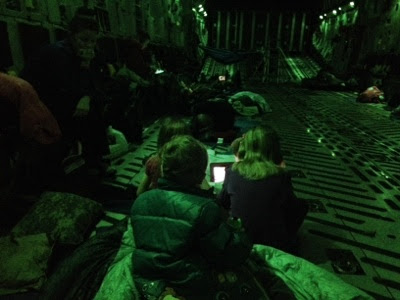 At altitude I laid out our sleeping bags and we snoozed, did some homework, watched a show on my phone, and passed the 9 hours. When we landed, it was 17 hours back in time – the morning we left. 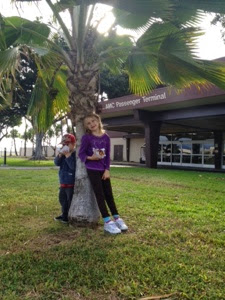 Just as we were departing I got on my phone and booked us at the Bellows fam camp… So at Hickam I needed a car. There is an enterprise rental at the terminal known for never having cars available.  Well to my shock they did have one: a minivan. It was about $100 more than what I had searched for a little economy at the Honolulu airport,  but after calculating taxi cost to and from the airport, I opted for the MV… The $20 savings not being worth the airport hassle.  It’s a big vehicle and I notice it’s poor turn radius.  Otherwise the kids are loving the space.  We folded down the first rear seats so they share the back bench and have a huge area for messing around.
I used a piss poor tourist map to find Bellows Air Force base.  It’s on the windward (east) side of the island while Hickam is on the south.  A giant mountain range splits the two with lots of road options and poor signage…. Well signs that don’t match the map.  The map has road numbers: the signs have named the freeways instead.
It’s gorgeous. The water is blue and the trees are green.   It’s hovering in the low 80s during the day and 70s at night.  Sleeping in our tent is perfect.  Bellows used to be a base but it’s now just a rec area with its own great beach, cabins and TLFs.   The campground is inland a little ways and comfortabley tucked into a stand of trees.  Glad to be back from the beach as the windward side is windy! 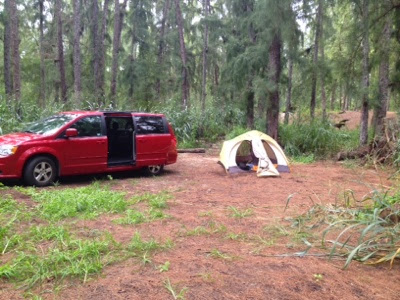 Luckily they let us check in early so we pitched the tent and took a nap.  We are the only tent here on a Thursday in December, though she said more folks come on the weekend.
Spent the afternoon playing at the beach and swimming.  Avi spends most of his beach time digging trenches; he likes to pretend he is a backhoe or crane.  Then he throws the  sand in the water and gets sucked out.   Zoe, on the other hand,  swims in the water and plays with the plants.  She finds seedlings and replants them,  builds sandy walls around the trees ad generally gardens at the beach. It got a bit cloudy and Avi was waterlogged so we headed to a bathhouse for warm showers and dry clothes. 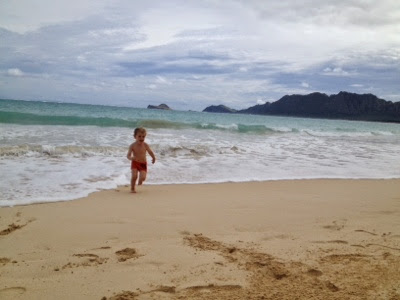 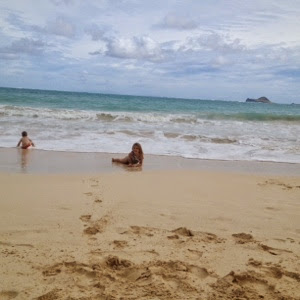 We needed food and instead of popping into the shopette I had this idea to go to the Whole Foods market; it’s been forever since I’ve shopped at a huge natural foods store and we saw one in the next town over. Plus, it was farm market day, so I figured that was a better choice.  Wrong!   Everything was so super expensive!  And not just at the Whole Foods; we ditched it and went to a grocery store to find still-high prices.  Same with the farmers market!  I thought it may be a fun place to grab dinner, but not spending $10 on a burger!  Yikes.  Not sure if it’s Hawaii or that the town of Kailua is kind of yuppy?  Can’t tell. The homes aren’t exceptionally fancy.  Top the prices off with a traffic jam – 2 hours to go 10 miles because of a sinkhole – back to Bellows and we got back after dark.
At Bellows, the shopette had all we needed.  This morning i did laundry at the laundrette since Avi was so tired he wet the bed last night!  I was surprised. One sleeping bag, his clothes, and mine needed washed.  He doesn’t even remember me waking him in the middle of the night for dry clothes!  Sleepy child!!
Today we rented boogy boards at the outdoor rec office and surfed. Only $7 for three boards and a life best for Avi!   Zoe wanted a surfboard but they only have 9 footers, nothing her size.  The body boarding was fun!  I popped Avi on my board and rode with him in.  He loves it and squeals.  Took a while for Zoe to get the hang – its a different technique than surfing, but once she did it was all afternoon in the water.  The sun was out and it was warm until the clouds built in the mountain.  Once it was chilly we headed in for showers and schoolwork at the campground. 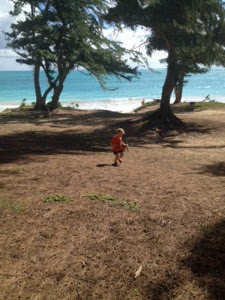 This evening we again wasted a drive, well not a complete waste, but still. The lady at the outdoor rec told me incorrectly that the big Honolulu Christmas parade was tonight.  We drove around the scenic way to see more of the island and stopped at some viewpoints, but otherwise it was silly.  The parade is tomorrow I found once we got to Honolulu. Made up for it with dinner at a great Mexican place called Serges … Just out the gate at Bellows.
Tomorrow we board some more and maybe go see an arboretum or the giant Marine corps base nearby.  Maybe they have kid size surf boards at one of their beaches.  Kaneohe.  It also has a campground but couldn’t book online; I’m interested to compare.