Sleeping at the terminal worked out great.  In fact,  if we hadn’t been there I never would have known about the flight we caught and we would be stuck in Hawaii for a while longer!  Thanks to Zoe!!!  She talked me into it.

At 0445 I heard the ping of the loud speaker announcing a roll call to Travis.  It awakened me, but I fell back asleep hoping for more snooze time.  Later a lady came in a turned on the light…. And quickly back off when she saw us.  We weren’t in the main family area, but instead on the rug of a side room for babies; it had the cribs and lower lighting.
Anyway it woke me enough to check the time: 530. Ugh.  I also decided to check the board.  To my shock and awe there was a magical flight to Andersen Guam set to roll call in an hour.  I quickly brushed my teeth and hustled out to the counter to be marked present.  Then I went out to move the car into a rental return space (another essential reason for getting the higher priced rental at the  terminal),  cleaned out our junk and went inside.  Kept the keys though,  just in case.
I woke the kids and got their airplane clothes – long pants, long sleeve, a sweatshirt, plus socks and sneakers.  They watched a show on the TV while I quickly repacked our sleeping bags and other junk that seems to spread out everywhere.  By then an hour had passed and we wandered out to the main terminal just in time for roll call at 0640. 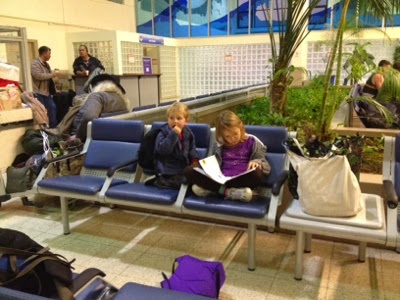 They release 20 seats – we were called 4th!  The terminal processed everyone quickly; verified names, checked baggage, paid for box lunches, and got tickets.  By 0730 we were back in our seats waiting for the boarding announcement.  I ran down the hall and dropped the rental car keys in the after hours box at 0800 we went through security and straight our to a bus.
A C-130 is a fat short cargo plane that has our propellers and opens out the back.  The only one I’ve been on got Zoe and I sick.  It kind of made me dread the 6-7 hours we would spend on the plane with the Jolly Roger flag that we saw out of the bus window.  This is a Marine Corps plane.
There are red canvas seats with webbed seat backs that fold down from stantions installed in the floor – most are along the walls but there was also a single set in the center at the front and that is where we chose.  Zoe sat on the center seat facing Avi and I along the wall with a little porthole window at our backs.  The buckles are funny, the plane is loud and slow, but it’s fun and free.

Once aboard we found out there would be a bonus on this flight. It  can’t get to Guam in one hop so we were stopping at Wake island to get gas!  Um wow.  That meant 6 hours to Wake and another 4 to Guam.  Long day ahead.  I was nervous about a bumpy sick ride.
We began with naps.  Naps are great and the canvas seats are like a bench so Zoe spread across hers and Avi and I spooned on ours.  When they woke we did some lessons, ate our box lunch sandwiches, and stared out the window.
Landing at Wake was a highlight.  It’s an atoll.  It has a runway from early Pan American seaplanes. It’s all Air Force.  You can’t come here.  But we were. AND they let us leave the terminal!!!  We walked along a little “walking tour” path to see the chapel built in 1967, a bunch of old metal from WWII, an anti aircraft gun and a rad old bunker used in Dec 1941 before he Japanese took the island.  There was a nice memorial to the marines and others, and the coral.  It’s an atoll so there isn’t dirt and dirt roads, but chunky coral an coral roads and a coral beach and everything made from coral an cement. It’s also flat an had very few trees.  The area around the airport certainly felt desolate. A half hour isn’t enough to see the lagoon or base where a few people live (there appeared to be short fluffy trees over there).  We were all rounded up and back into the plane within an hour of landing.  Very cool and very remote. 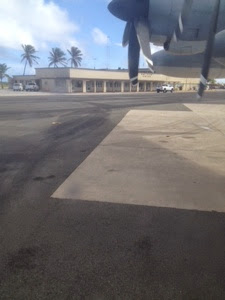 It made me think of my granddad who recently passed away.  One of the things we talked about was his time on a pacific island during the war.  He found it fascinating and kept busy, though said that not everyone did. I did not see any of the kind of shells he collected, but we didn’t get near the lagoons. 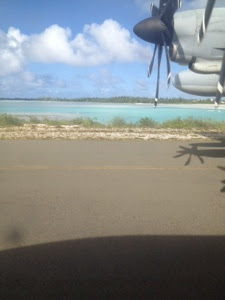 A steep takeoff just like the steep landing and we were back on the path to Guam. Zoe’s water bottle went clanking and rolling down the airplane when we took off.
The second highlight of the day came next.  I’m not sure if the kids would rank this or Wake island number one.  I will ask. They got to go in the cockpit and fly the plane!! For serious.  They sat in the right hand seat wearing headphones while the pilot showed them stuff.  She let Avi play with the yoke; he intensely pretended to fly like he was attacking someone.  He loved the clouds and the buttons, but especially loved speaking on the headset.  Thy let me use one so everyone could hear everyone and chat. 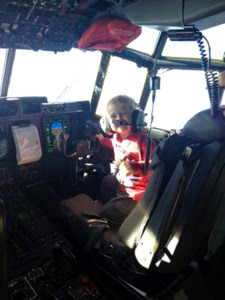 This crew is out of Dan Diego and seemed geniunily happy to be helping us get home in a fun way.  Oh, and the flying was smooth.  No sick bellies here. 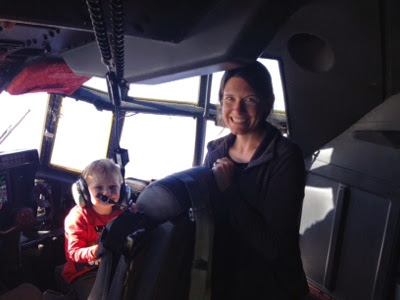 Zoe’s turn was next.  This time the oily turned off the autopilot and actually let Zoe stead for real!!!!!  It was cute to see her little blonde head beside the female pilots blonde head.  The marines were commenting on her being a mini version. “Look two female pilots!”  “Just what we need”.  All in fun.  Zoe did great following directions- she banked left and straightened out to get the ball on the line.  She went right and then back but it was tougher.  “Not an ambi-turner” said the pilot.  :).  They had a conversation about flying and daddy being a pilot.  It was a proud moment to listen in on her convo with a role model while flying. The pilot let Zoe just stear back and forth for a while. 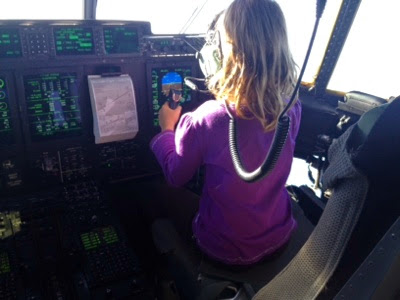 Meanwhile,  Avi slipped on the steps and hit his head.  I picked him up; no one could hear the crying.  We are wearing our earplugs this entire flight.
Done in the cockpit, we climbed back down the ladder to our seats and revelled.  Zoe said it was the most amazing thing ever. Avi wanted to go up again.
A movie was a necessary distraction.  So my old iphone came out and they watched Swiss Family Robinson, Alice in Wonderland, and Fantasia…. All without audio.
It’s too loud on these planes. Though I swear I keep hearing big band music – like it’s playing faintly on a radio.  Maybe The ghosts of Pearl Harbor have gotten to my brain.
The second half of the flight ended up being just under 6 more hours.  Slow. 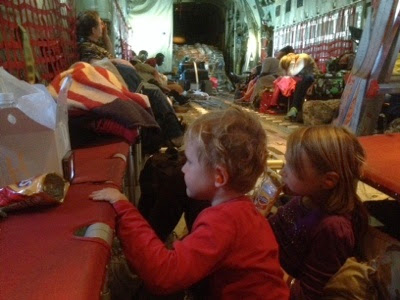 I read three (shortish) books on my kindle. The Mayflower, Beowulf and the Wizard of Oz. Plus some of Odins Children which Zoe and I are reading together – I needed to catch up to her 5 chapters ahead of me.
So what I thought would be a great afternoon in Guam turned into a log fynon a C 130.  The pax rep at hickam said we should land in Guam about 1pm local, maybe 2.  That sounded great, but we landed at 5pm and weren’t into the terminal until about 6 where we waited for bags about a half hour.  So much for seeing anything if Guam. I was hoping for   The afternoon to visit, but the flights to Osan are heading out this evening.  I was also hoping maybe an Osan flight would turn up for tomorrow afternoon and I’ve us the morning to your Guam, but no such luck.  So,  we’ve been to Guam and walked to the bowling alley for dinner.  Now we are napping until the 2245 roll call to Osan via Kadena. Should get on. 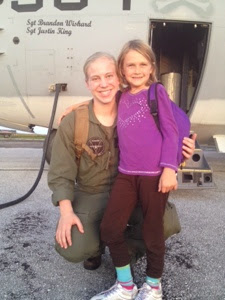 It was worth missing out on Guam sights to go to Wake island and see the kids fly!