I wasn’t too bummed as that flight had a long overnight layover at kadena that I dreaded…. But the next option (straight to Osan thank goodness) only showed 5 seats available!  I worried we wouldn’t make the cut.
Well I finally tried to sleep for a few hours.  Zoe and Avi had been out since before the roll call, and claimed a few small couches.  This terminal has ‘no sleeping on floors’ rules so I was hard pressed to find somewhere.  A glider rocker fit the uncomfortable bill for a bit.  Then I took Avi’s little couch and plopped him in a baby crib.
As the sun rose I was hopeful as only one new guy showed.  We had been first selected last night, so I was thinking our chances to get the direct flight were good.
The kids woke and we went outside to play.   There is a nice big lawn out front with plumeria and mimosa trees.  Avi and I collected flowers and strung them on sticks while Zoe decorated the bare trees with flowers. 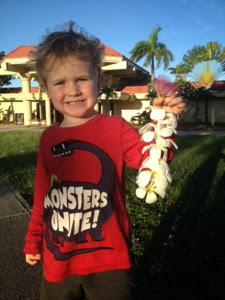 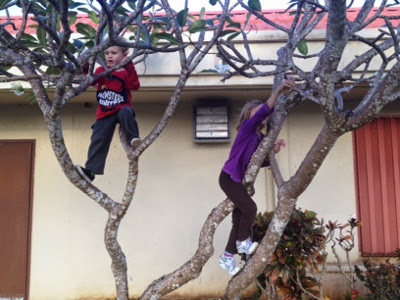 At 0745 we went in to verify I was marked present and listed as a cat 4.  I had to relinquish my tickets for the other flight in order to so this, so if not selected I was no longer able to fall back on the flight that shifted 24 hours.
That may have been a  tempting flight to remain on if it didn’t layover in kadena so long.  I could’ve gotten a rental car and seen Guam for the day, but then not gotten home for another 2 days – Saturday – and would miss the squadron Christmas party.  Nah.  I’m tired…. Nay, exhausted!  Plus, it could stay broke for a while. Those C-5s do that a lot.
Roll call was at 0800; we were called 2nd and took 3 of the 5 seats. Another lady named Tammy that I’ve been talking with also got on. I’m glad; she is stationed at Yongsan and was in Hawaii visiting family and rode with us yesterday on the C-130.  She is another homeschool mom of 7 kids!!  But the youngest is high school age. Fun lady to speak with.
The flight was uneventful.  A really full c-17 but with room enough to lay down and sleep which we did.  In fact Vi and I were sleeping before takeoff.  I woke to find the load master getting Zoe back to buckled while we were climbing to altitude.  I guess she had gotten up to grab her snack from the bag and couldn’t buckle up again.
It was soon snooze time.  They brought out the usual scratchy wool blankets offered on space a flights – I grabbed up three and used them to sleep upon.  They make a great insulator from the cold floor.  Pulled outbound sleeping bags and woke with little time to look around and get Avi a snack before we descended into Osan.  That 4.5 hours went by quickly. 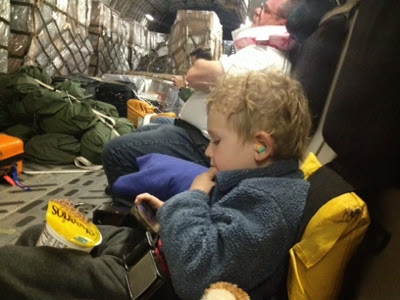 I loved that Zoe cheered when we found out it would be only 4 1/2 hours.  “Awesome!  A short flight” she said.  Only my kids would think that short.  What a life they lead; it’s fun to explore with them!
I texted Bryan when we landed and he was at the terminal to pick us up!  We gave Tammy a lift to the Yongsan bus station and headed home.  Ahhhh warmth.  It’s cold outside!!! Back to reality and getting ready for Christmas.