Avi is one of the most complex kids.  He is very in love with me right now; he is so affectionate with his hugs and kisses and “I love you”s.  He has even declared at the dinner table that mommy is his favorite which, I hope, Bryan doesn’t take to heart.   Avi is also super sweet to Zoe and considerate to his friends.

But he is also like a little time bomb.  Say the wrong thing or cut his pizza in three pieces instead of two and he is a crying mess.  Not an angry tantrum but crying like you’ve broken his heart.  Sometimes I can calm him with kind words and explanation but often that just makes it worse.  Instead, I will explain the situation and just leave him alone with an open invitation to return to whatever we were doing … Crafts or lunch or puzzles or whatever made him a lunatic … And he will wander back over when he sees the fun didn’t end because some minor thing went awry … Like the wrong lego color or the blue marker ran out or he doesn’t like cheese on his egg.
It’s so amazingly dramatic!!  Having unintentionally made it worse by laughing, I’ve learned to keep my reaction to myself.
Bedtime seems the worst.  Lately he has insisted on a sleeping partner and cried like a baby when informed no one will be sleeping with him all night.  Sometimes I have caved when he seems so very saddened by it… When he has asked Zoe for a sleepover and taken her “not tonight, bud” like a major rejection.  Zoe has gotten to not ever letting him sleepover.  It had been a fun occasional thin they arranged together,  but he got needy and turned it into an irritation for her.  I get her point.
We’ve instituted a Sunday night sleepover now.  So he can be garunteed and look forward to one sleepover a week.   He is not to ask for others.  And they can make it fun and creative; tonight they are in a tent in the living room.  Zoe was so into it she wanted to do all the bedtime reading.
Anyway, Avi is a such a sweet good natured little man that currently has wierd “needy psycho boyfriend” tendencies.  We’ll work that out before he starts dating.  🙂
Aside from that he is very novel and creative with his play.  He can, in a shocking way,  turn anything into destruction. He will be coloring and then take a red crayon, pretend a volcano exploded and cover his entire picture.  He will build an amazing structure and smash it in an earthquake.  In the bath he plays tsunami, outside he is a tornado, sometimes he is a wrecker and crane liking up the leftover debris.  It’s incredible what he can invent and destroy.
The best, though,  are his sound effects. He makes guttural sounds for the impending doom, crash sounds for the action and more literal sounds, but then there are “background music” sounds. It’s like he is a movie and there is a “dundunt” beat going on or a “rearrrrr” song happening.  His little mind comes up with amazing stuff.
Here he is at family night Sunday.  Zoe and Bryan made marzipan and we all sculpted it into bees.  Notice he NEEDED to sit on my lap… And that little be was subsiquently squashed to the “baby bumblebee” tune. 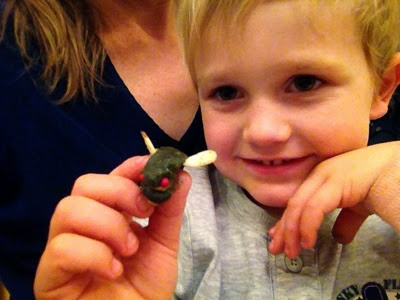 See his squashed one?  Then he got mad we were making more than two each and departed. He also got angry I took an unsolicited picture of the bee. 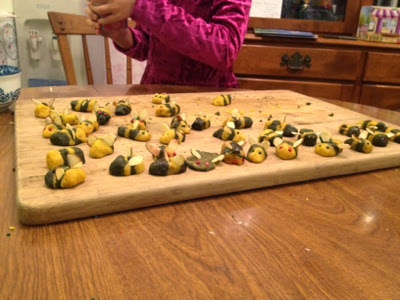 But here he is earlier today on his new bike!!  Happy as a clam. 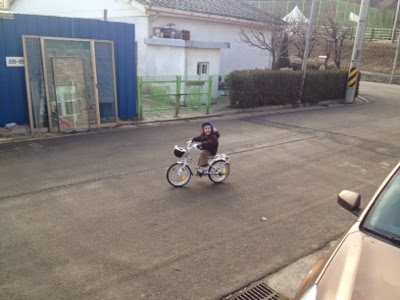