Our trip to Hanoi was wonderfully uneventful.  We woke early, caught a can that happened by the house, and took the city bus to Incheon airport.  After checkin we made our way to the second terminal (where the foreign airlines are), and let the kids play in the playground for a bit.  Walked to our boarding gate and boarded a VietJet flight; this is a discount Asian carrier, lots of that sort of thing in Southeast Asia and they are finally adding Seoul to the connection list. 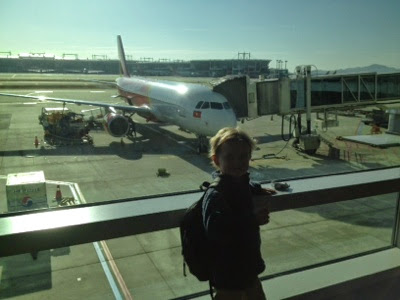 The flight was fine; a short 5 hours.  The kids napped, read, did their school workbooks, and watched a movie.  The food was good.
Our driver from the Golden Orchid hotel was holding a sign with my name, Nd we were off!  The city is wild; there are scooters with any number of people and goods everywhere jockeying for front of the line, cars and buses sharing the road, people walking in the road, girls with conical hats and veggies hanging from their shoulders. 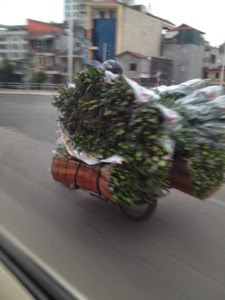 The buildings are a fun blend of typical Chinese cement style housing but with an obvious French flare for decor.  Many are tall and thin: our hotel is only as wide as our room, and 3/4 floors high with a balcony on each floor and rooftop veranda.  Then their are the colors: pinks, greens, blues, and beige seems popular all with lots of additional decorative painting on the columns and spires and “gingerbread” that makes them look like little castles. 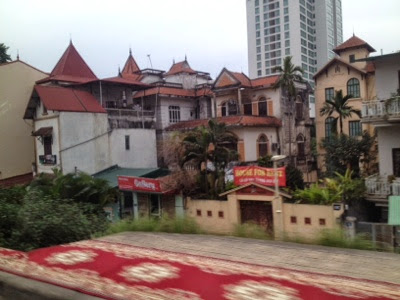 The city is dirty, but not full of trash.  It’s got a pollution problem, but there are revered giant old trees lining every street and making shade.  Many trees have doe fright taken over the sidewalk and part of the road so traffic must go around.  The wires hanging from buildings and through trees are insane!  Giant bundles of wires drape like bunting. 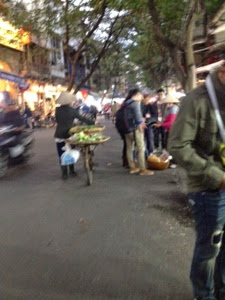 We walked around,  got ripped off on donuts from a lady selling them in a basket, and paid less than $4 for dinner of fast baguette sandwiches. 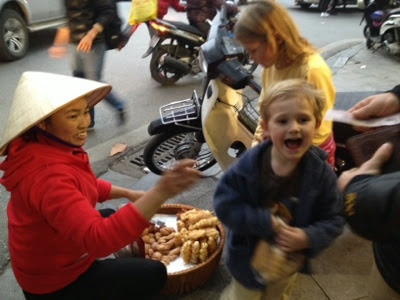 We are staying in the old quarter and walked to the lake in the center where we visited the temple on the island .  It was another fascinating blend of Southeast Asian and Chinese.  It also held the remains of of great turtle from that very lake where a legend says the turtle returned a magic golden sword to the gods after it helped the vietnamese ride themselves of the Chinese empire.  The kids have loved this legend!  They found the paintings of its story on the temple and wondered at the embalmed turtle. 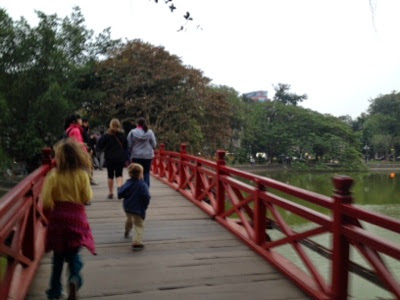 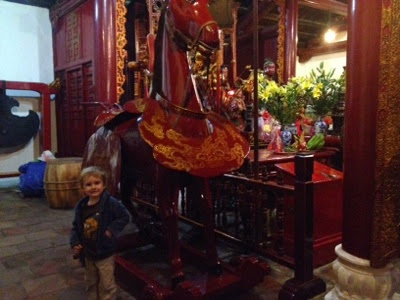 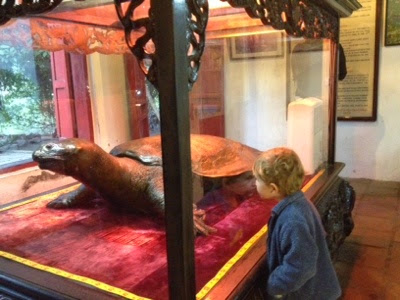 Later in the evening they recognized the characters when we watched the local Water Puppets show and got excited to feel that they knew this one! The show was neat to see.  Traditional Vietnamese art; there were marionettes floating in water being controlled by long unseen poles under the water from people standing behind a screen waste deep in the pool.  It was indoors, too,  in a nice large theater near the lake.    $3 entry was still cheaper than those donuts.
We walks back to the hotel.  The kids and I were exhausted. Our room is nice!  $35 will get you a large room with two queen size beds with rose petals, fancy decor, ensuite western bathroom, and our own balcony. Bryan went out for a massage while he kids and I concked out.